Last week’s arrest of one of Russia’s most senior former nuclear officials for pocketing state research grants and stealing other peoples work off the internet is being touted by Russia’s state nuclear corporation, Rosatom, as one of its biggest corruption cases ever. 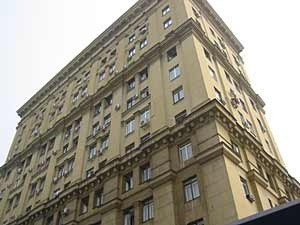 Last Wednesday, Rosatom announced the arrest of its former deputy director, Yevgeny Yevstratov and his group of radiation safety technicians in a swoop they said was a stunning as the arrest of Yevgeny Adamov, former minister of atomic energy at Rosatom’s precursor Minatom – or the Ministry of Atomic Energy – in 2005 on US money laundering charges.

But Bellona’s Alexander Nikitin, who heads St. Petersburg’s Environment and Right Center (ERC) Bellona, said that he doubts “the charges are justified.” He added that the term corruption is tossed around in contemporary Russia as frequently as charges of espionage.

The Adamov case led to a dramatic international tug of war as both Russia and the United States fought for Adamov’s extradition from Switzerland where he was arrested on a US warrant by Interpol.

A Swiss court eventually sent Adamov back to Russia where he received a sentence of five years hard labor that was later suspended because of his age. In the US, he faced a 20-year sentence.

If convicted, Yevstratov could face 10 years in a labor camp. He was fired without explanation from Rosatom four months ago – a time frame roughly corresponding to the disaster at Japan’s Fukushima Daiichi nuclear power plant.

He is charged with embezzling 50 million roubles ($1.8 million) in state assistance and taking another 60 million roubles his team was supposed to have spent on a project involved in eliminating spent nuclear fuel.

One of the projects he was working on exploring a way to eliminate spent nuclear fuel.

“Instead of doing their own research, the corporation’s employees downloaded scientific material off the Internet and pretended this was their own know-how,” the interior ministry’s economic crimes chief Denis Sugrobov told the RIA Novosti news agency, as quoted by Agency France Press.

“And they pocketed the money,” said Sugrobov

“None of this is very surprising,” Rosatom spokesman Sergei Novikov told AFP.

“These arrests were made with the help of our own investigation,” he said.

Rosatom’s Public Council oversight body member Sergei Kuznetsov said he was not surprised to hear about the arrest, saying Yevstratov seldom came up with new ideas.

“There are certain websites … that regularly ran articles related to what he did,” the Rosatom Public Council member told the Komsomolskaya Pravda daily as quoted by AFP.

But Nikitin said that, “I have spoken with a number of nuclear experts (in Russia) and frankly they are surprised by what is happening with Yevstratov.”

Further, said Nikitin, “I can hardly see that (Yevstratov and his team) would steal anyone’s work from the internet and try to make peanuts – and 50 million roubles for Rosatom is peanuts – off of it.”

Indeed, Yevstratov’s salary after taxes was 100 million roubles a year. As Nikitin noted, there would seem to be little motive for stealing only 10 million roubles more than his annual pay – especially when there was an opportunity to steal so much more.

Nikitn further asserted that ERC Bellona and Bellona Murmansk had tried to establish which of a number of nuclear safety sites that were meant to be built in Murmansk under Yevstratov’s oversight had not been built and were unable to find any.

A possible explanation for the arrest, said Nikitin, is Rosatom’s ardent efforts post-Fukushima to polish its image, which would make the head of safety programmes an obvious target.

The results of a first round of stress tests on Russia’s nuclear reactors which was leaked to Bellona Web late last month revealed that the industry was plagued with fuel storage problems, construction flaws and that none of Russia’s reactors would withstand a natural disaster on the scale of the earthquake and tsunami that destroyed Fukushima Daiichi.

Rosatom head Sergei Kiriyenko, in a late June meeting with Prime Minister Vladimir Putin, suggested that $25 million in government funding would be sufficient to bring Russia’s reactor fleet up to safety standards. Though Kiriyenko made no explicit reference to the leaked report, the improvements he cited echoed problems that it identified.