ST.PETERSBURG – In a report to Prime Minister Vladimir Putin on the state of Russia’s nuclear reactors three months after the Fukushima disaster, Sergei Kiriyenko, head of Russia’s state nuclear corporation, was forced to deal with many questions that arose in a recently leaked report on the vulnerability of the Russian commercial nuclear industry. 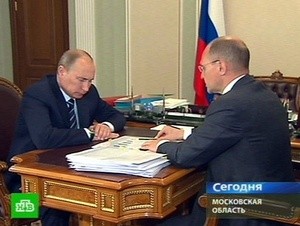 The partially televised appearance dovetailed with the release to Bellona as well as to other international news outlets and environmental agencies of a draft report on host of safety deficiencies that could make Russia’s civilian nuclear reactors susceptible to both man-made and natural disasters.

The controversial report was leaked by anonymous sources and is purported to be a genuine draft government document prepared by state agencies on the various environmental woes and risks across Russia’s industries and, in particular, alarming problems within the commercial nuclear domain.

Though Kiriyenko was at pains to impart on Putin that Russia’s nuclear reactors were beyond reproach and that any further safety enhancements would only be for peace of mind rather than of dire necessity, his words went a long way toward indicating that the assertions made in the leaked report were accurate.

Kiriyenko was called to the Kremlin to report on the first round of safety tests ordered for  Russian reactors in the wake of the ongoing Fukushima Daiichi catastrophe, which began on March 11 when a tsunami and 9.0 magnitude earthquake hit Northwestern Japan.

A part of Kiriyenko’s report to Putin was aired as a news segment on state television stations. The official Kremlin transcript is available on the prime minister’s website.

The official full Kremlin transcript of the meeting, however, coincides with concerns raised by the anonymously leaked report – without addressing the report explicitly.

Primarily, Kiriyenko spoke to the fact that the emergency cooling systems on Russian reactors should be improved. He was careful in his phraseology, saying that cooling systems are essentially safe, but went on to suggest that RUR 5 billion ($178 million) be spent to improve their condition.

“As far as operational plants are concerned, we have conducted an additional survey and have decided to buy additional equipment,” said Kiriyenko in his meeting with Putin according to the transcript. “We believe that it will be better not to call attention to the fact that these earthquakes and tsunamis don’t happen in Russia. We need to bring our old power plants up to the modern post-Fukushima standards.”

Kiriyenko went on to explain that the $178 million would be put toward that and a total of RUR 15 billion ($534 million) would be spent over the next two years on acquiring additional equipment. These efforts would be undertaken with Russia’s Emergency Situations Ministry (MChS), and Rosatom would leave no backup generator unturned in the refurbishments.

“Each reactor has three emergency diesel generators, but we are buying additional diesel generators and motor pumps. In fact, in the near future we will provide all our plants with the necessary safety systems,” Kiryenko told Putin.

As is already well known, failed primary and back-up cooling systems at Fukushima Daiichi have been the single most pressing issue as that crisis continues to unfold. This was also one of the issues identified in a table attached to the leaked report as it lists safety deficiencies at Russian nuclear power plants and suggests possible solutions.

“No substantiation is provided for the capability of reactor units of nuclear power plants,” the attachment said in part, “to maintain safe condition during prolonged periods of time (up to several days) during accidents caused by loss of [cooling ponds’] cooling systems, loss of power at the reactor unit compounded by failure of diesel generators, [or] failure of service water supply system.”

In other words, no guarantee seems to be currently provided that Russia’s nuclear reactors will not succumb to core meltdowns or spent nuclear fuel cooling crises that have been witnessed in Japan.

In his report to Putin, Kiriyeko also mentioned – as did the draft report – that the seismic data on areas where Russia’s nuclear power plants are built are out of date.

“As I mentioned, all stations are located in normal six-point earthquake zones with an estimated maximum of seven-point quakes,” said Kiriyenko. “In the interest of safety, we have now instructed specialists to remap their areas taking into account all new data in order to recheck the seismicity of our power plants. They analysed extreme scenarios, such as tornados sucking out all the water from reactor cooling ponds. Although the probability of this happening is miniscule, we must consider even this for the sake of safety.”

A mantra of the Russian nuclear industry following the disaster in Fukushima was that Russia’s nuclear reactors were simply not seismically vulnerable.

Indeed, few may be – and, in fact, none of Russia’s ten nuclear power plants are in the seismic- and tsunami-prone Far Eastern region – but the recently leaked report indicates there are still reasons to be concerned.

“Seismicity levels of a number of sites with nuclear power plants are underrated compared to the ‘General Seismic Zoning Maps of Russia,’” the attachment to the leaked report said, adding that no regulations currently exist that determine the procedure for assessing seismicity of sites and no body with authority to issue such assessments is established, either.

Furthermore, the seismic strength category is either not established correctly or not at all for some systems and equipment in place, the attachment said, thus raising doubt as to whether certain nuclear power plant components would be able to withstand a powerful shake should an earthquake hit. That, the attachment said, also concerned certain safety-significant equipment.

More importantly, according to the leaked document, “not all of the nuclear power plants have the option of automatic emergency reactor shutdown provided for earthquakes of a given intensity level.”

At Fukushima Daiichi, the reactors that were in operation at the plant when the dual natural disaster struck shut down automatically – though they needed still to be cooled continuously, and the failure of the cooling systems spun the accident out of control – but in Russia, there even seems to be no certainty that an earthquake will prompt a plant’s reactors to power down automatically to begin with.

Kiriyenko’s animated appearance (in Russian) before Putin on Segodnya, the news programme on NTV television, was meant to be a reassuring reminder that what is currently happening in Japan is beyond the pale of that which could happen in Russia, even given the worst of circumstances.

But in light of the leaked report, Kiriyenko’s responses leave much to question over the safety of Russia’s aging fleet of nuclear reactors.