The disaster at the Fukushima Daiichi nuclear power plant cannot be compared to Chernobyl, Sergei Kiriyenko, head of Russia’s state nuclear corporation said during a visit to China, suggesting that Tokyo was exaggerating the radiological catastrophe, possibly for financial reasons. 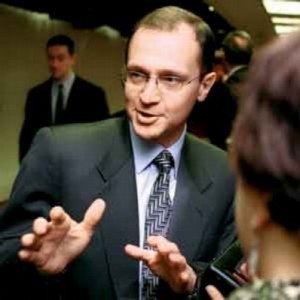 On Tuesday, Japan announced that it rated the ongoing catastrophe at the quake-crippled nuclear plant at a Level 7 on the International Nuclear Event Scale (INES) – a designation that puts it as equal to the Chernobyl disaster of 1986.

A Level 7 accident on the INES scale involves “widespread health and environmental effects” and the “external release of a significant fraction of the reactor core inventory.” Japanese nuclear authorities had, until Tuesday, rated the accident at a Level 5.

This level implies a “Limited release of radioactive material likely to require implementation of several planned countermeasures” and “several deaths from radiation” – the same level assigned to the Three Mile Island disaster in the US state of Pennsylvania in 1979.

“It is hard for me to assess why the Japanese colleagues have taken this decision,” to raise the INES level of the accident Kiriyenko told reporters in the southern Chinese city of Sanya on the eve of the BRICS summit, according to Agency France Presse.

Kiriyenko said at first the Japanese authorities had attempted to downplay the scale of the disaster, but now the situation at the plant was improving.

“Our estimates have shown that the [INES] level was between five and six,” Kiriyenko said. “Today it doesn’t reach the sixth level.”

Bellona swipes at Kiriyenko for ignorance

Bellona’s nuclear physicist Nils Bøhmer immediately took issue with Kiriyenko’s remarks, saying that the International Atomic Energy Association (IAEA) – which, with nuclear member nations developed the scale – has very concrete limits in the INES guidebook on the amount of radiation that constitutes a major release – and that Fukushima Daiichi had exceeded them.

“Figures shown by the Japanese show levels 10 times higher that the limits set out in INES guidelines,” said Bøhmer.

Kiriyenko went on to say that: “I suspect this is more of a financial issue than a nuclear one,” appearing to suggest that the Japanese authorities were seeking to reduce the burden on insurance companies.

“I guess that maybe it could be linked to the definition of force majeure with regards to insurance? I would pay attention to that. It is a bit strange,” Kiriyenko said.

“I find this a bit strange coming from Kiriyenko, if not a bit cynical,” said Bøhmer. “Kiriyenko apparently has not read the guidelines, he should know the procedure.”

IAEA to assign final level based on Japanese date

According to Bøhmer, assigning a nuclear event a level on the INES scale originates with the country where the accident has taken place and the data that it submits. The IAEA then reviews all data once the situation is under control, and assigns the event in question.

In these circumstances, said Bøhmer, it will likely be some time before the IAEA affixes an official level for the Fukushima Daiichi disaster on the INES scale “because the situation is far from being under control.”

“The IAEA will assign a final level to the incident independent of any financial considerations in Japan,” Bøhmer. “Kiriyenko should know this – it is not for Japan or Kiriyenko to assign the level, but for the IAEA.”

Kiriyenko based his remarks on the fact that Chernobyl exploded dramatically, sending radiation around the northern hemisphere. But where Chernobyl seemed to come in an instant as its core melted down, Fukushima Daiichi’s radioactive releases are of a different nature. Suspected core breaches and partial fuel melts have contributed to wide spread contamination, registered throughout the northern hemisphere, as well as massive releases of radiation from the spent nuclear fuel pool atop reactor No 4, which is overcrowded, containing 1535 fuel assemblies. Other fuel pools are also emitting huge doses of radiation.

Oversaturation of reactors and spent fuel ponds also contributed to a month long water leak issuing from reactor No 2, releasing seawater meauring 1000 millisieverts directly into the Pacific Ocean. The plugging of the leak is only a stop-gap measure: water levels in the now-clogged shaft are rising and will need to be abated to avoid yet more water leaks at that reactor. Workers have also dumped some 11,500 tons of irradiated water into the sea to make room in the plant’s waste treatment facility for yet more irradiated water.

“The Fukushima Daiichi plant is rewriting the book on nuclear reactor accidents.  There are multiple major sources of emissions from the same site at the same time, including more than one reactor and more than one spent fuel pool,” said Dr. Arjun Makhijani, president, Institute for Energy and Environmental Research.

“For the first time, major portions of three reactor buildings have been blown away by hydrogen explosions.  Backup power arrangements have been shown to be grossly inadequate,” he said.  “Freshwater was not available for essential cooling functions for an extended period. The situation is far from being under control more than one month after the start of the accident.”

Level 7 came as no surprise to other nuclear industry experts

On Tuesday, when Japanese Chief Cabinet Secretary Yukio Edano announced that his government was elevating its assessment of the accident to the scale topping and dire Level 7, it came as little surprise to many nuclear experts, including Bøhmer.

“This is an attempt at being honest about the effects [of the disaster],” he said. “Japanese officials have observed the radiation situation over the month and have assigned the accident the level it deserves.”

He also was surprised that Japanese officials had not come forward sooner with the new rating, saying that they had had the data they needed to suggest the new level for several weeks.

In his remarks about raising the INES level of the Fukushima Daiichi accident, Edano also announced that several targeted communities outside the 20 kilometre evacuation radius around the plant would also be asked to move in the next month. Most of these communities lie within the 20-kilometer to 30-kilometer radius around the plant, but a handful lie even further away than that.

The reason behind Japan’s new Level 7 assessment was the result of pressure put on the government to raise the level after Japan’s nuclear safety commission estimated the amount of radioactive material released from its stricken reactors reached 10,000 terabecquerels per hour for several hours following the earthquake and tsunami that devastated the country’s northeast coast on 11 March.

That level of radiation constitutes a major accident, according to the INES scale, said Bøhmer.

Kiriyenko’s remarks also come in the context of Russia’s lackluster response within its own nuclear industry in the wake of the Japanese crisis, which has set most major nuclear powers on reviewing the status of their own plants. Germany has gone the further by shutting down some of its reactors and pledging to go non-nuclear by 2020.

Russia struggling against Fukushima complex for its own financial gain

But Russia, which is jockeying to become a major nuclear salesman, especially in the foreign market, has ordered no review of its own reactors – many of which are well beyond their original engineered operational periods of 30 years and are running on extensions.

A Bellona investigation revealed that Fukushima Daiichi’s reactor No 1, which went into service in 1971, had two weeks prior to the March 11 earthquake and tsunami, received a 10-year operational extension despite warnings from regulators that it would not withstand an earthquake, and that stress fractures were found in its backup diesel generators.

Failure of power to the reactors for cooling purposes has been the central crisis facing rescue workers who have worked around the clock for more than a month to keep the reactors at manageable temperatures.

It was further revealed to Bellona Web by Mitsuhiko Tanaka, a former reactor designer for the Fukushima Daiichi plant turned whistleblower, that he knew the General Electric Mark 1 design – which constituted five of the six reactors at the plant – was fatally flawed, and kept the secret until 1988 when he turned to the government with his information. He was rebuffed.

Reactor No 1 – as well as reactors No 2 and 3 – suffered hydrogen explosions early in the disaster due to the small size of their containment vessels, a disaster Tanaka foresaw.

Three engineers who worked for General Electric in the late 1960s who reviewed the Mark 1 design also came to the conclusion that the reactor was a time bomb and resigned, they told ABC news in an interview last month.

The United States had 28 GE Mark 1 reactors in service.