MOSCOW – Personnel at Russia’s Balakovo Nuclear Power Plant (NPP) were again forced on Wednesday to patch up the station’s faltering equipment just four days after the last unplanned repairs took Reactor 4 down for five days. The latest emergency had the reactor operating at reduced capacity for 21 hours. Meanwhile, questions are raised whether information about such incidents is provided to the public on time.

Published on February 18, 2011 by Andrey Ozharovsky 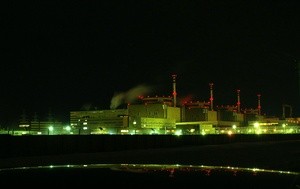 The plant’s public information service reports on its page (in Russian) – managed by the head organisation, the Russian nuclear power plant operator Concern Rosenergoatom – that on February 17, the reactor was plugged back into the grid following repairs on the unit’s electrical equipment. As of 10:30 am, load had been upped to 300 megawatts. “Load increase is currently in progress according to regulations,” Rosenergoatom said.

It said, however – in contrast to Rosatom’s report – that the incident of February 16 resulted in initial load reduction down to 10 percent, rather than 30 percent reported by Rosatom’s Crisis Management Centre. Balakovo’s Reactor 4’s normal output capacity is 1,000 megawatts.

The troubling situation with an increasing frequency of glitches, emergency shutdowns, and incidents requiring unplanned maintenance at Russia’s reactors is currently compounded with a what looks like a less-than-reliable access to timely information about such events on Rosenergoatom’s website.

Marina Rodionova from Rosenergoatom’s press service confirmed in a phone conversation with Bellona Web on Friday that the company’s website has migrated to that of its parent company, Rosatom, and the new version is currently being fine-tuned. That is also the reason why some of the latest Russian-language reports regarding the operation of nuclear power plants – which are all operated under the Rosenergoatom umbrella – are not currently available on the website’s English version. This lag in translation flow, Rodionova said, will be taken care of in the near future.

Bellona Web spoke to a representative of Balakovo’s public information service on Thursday, who said information about Wednesday’s incident was sent to local media, but the plant’s website and press releases are managed in Moscow and it remains within Rosenergoatom’s purview to provide current operational information on time.

At the time the Russian version of this story appeared on Bellona’s Russian website, on Thursday, no information on the incident at Balakovo was yet available. It was not until Friday morning that Rosenergoatom’s report appeared, dated February 17, 11:08 am.

Rodionova, in the phone conversation with Bellona Web, said the report was posted exactly at the time and on the date specified in it and denied it was back-dated.

Bellona Web’s source at Balakovo said the turbogenerator’s malfunctioning was quickly corrected: “At 10 in the morning [on February 17], we started increasing the load and by 4 in the afternoon, the reactor was brought to 100-percent load.”

The reactor was thus operating at decreased capacity for almost 21 hours. It had only been in normal operation four days after undergoing unplanned maintenance (in Russian), which had been completed at the unit on February 12 at 06:09 pm.

These most recent five-day repairs had been required at the plant following a noisy accident involving a spontaneous snap and failure to reseat of a pilot-operated relief valve in Steam Generator PG-1. Rosenergoatom only referred to that February 7 event as a shutdown executed “in accordance with a forwarded request in order to initiate preventative maintenance of the heat machinery of the steam piping system of the secondary circuit.”

Russian nuclear power plants have lately been showing an alarming tendency toward a higher frequency of reactor trips, failures in electrical machinery and systems, and the resulting unscheduled repairs that disrupt the supply of power to the grid. As reactor equipment gets older, more and more incidents will lead to unscheduled maintenance. This does not only mean additional expenditures and unstable supplies of energy: Pressured by the demands of bringing a reactor back online as soon as possible, personnel may find themselves forced to carry out repairs in a haste, with more equipment glitches occurring as a result – generating further risks for safe and steady operation.

Economically, the performance of Russian nuclear power plants is impacted as well.

According to Rosenergoatom’s report on the station’s output last January, Balakovo

“fulfilled the January target [to] 109.1 percent. The utilisation factor of maximum capacity is 82.4 percent.”

Yet, the installed capacity utilisation factor being at 82.4 percent may not exactly be the best news. Russian reactors have been ending up in longer periods of downtime and repairs, with the grid losing more and more power as a result. Last January, Balakovo’s outages resulted in 523,893,000 kilowatt-hours the grid did not receive.

If all four Balakovo reactors had operated free of load-reduction incidents or outages last January, the total output for 31 days would have reached 2,976,000,000 kilowatt-hours over the actual output of 2,452,107,744 [kilowatt-hours] of electric power reported by Rosenergoatom – an undersupply that stands at odds with the target reported “fulfilled to 109.1 percent.”