MOSCOW – The first days of February set a record for the number of emergency shutdowns and unscheduled repairs at Russia’s commercial nuclear reactors: five scrams and load reduction incidents in just eleven days. The Russian nuclear energy industry is showing a remarkable unreliability in doing what it is expected to – providing a steady supply of energy. The nuclear authorities, meanwhile, keep pretending that nothing of significance is going on.

Published on February 15, 2011 by Andrey Ozharovsky, translated by Maria Kaminskaya 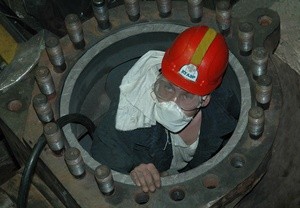 Unscheduled reactor shutdowns, power reductions, and reactor and generator trips rippled through Russia’s Balakovo, Smolensk, Kursk, Beloyarsk, and Kola Nuclear Power Plants (NPPs) throughout the first eleven days of February. The Russian nuclear power plant operator, Concern Rosenergoatom, refers to each incident as having taken place “in accordance with a request forwarded” by the operating staff – rather than shutdowns executed automatically by the reactors’ emergency protection systems. That, however, should not mislead anyone: Russian reactors, as this and earlier statistics show, seem incapable of reliable operation; incidents when nuclear reactors get disconnected from the grid, thus losing capacity to the energy system, have become a regular occurrence.

February’s shutdowns, according to the information available, were caused by glitches in steam generators and turbogenerators – that is, not in the nuclear-related equipment. Yet, any shifts or changes in the regular operation of a nuclear power reactor – be it a case of load reduction done by the operators according to regulations or an emergency shutdown by the automatic protection system – mean an increased burden on the equipment in use in the aging reactors, where something at some point is simply going to give…

Balakovo NPP, Reactor Unit 4 (a VVER-1000 series reactor, commissioned in December 1985): Shutdown occurred on February 7. Unscheduled repair works initiated. (At the time the original Russian version of this report was being prepared, maintenance was still in progress at the  reactor unit).

The Russian State Nuclear Corporation Rosatom had the following information on the incident: “At 06:57 pm, personnel operating the reactor of Reactor Unit 4 brought it to a subcritical state following a spontaneous snap and failure to reseat of a pilot-operated relief valve in Steam Generator PG-1. Unscheduled repairs initiated at the unit.”

Balakovo’s public information centre, however, offered a different account on its new website (the page, managed by Rosenergoatom, so far provides a report on the event in Russian only): “On February 7, 2011, at 06:57 pm, Reactor Unit 4 was shut down in accordance with a forwarded request in order to initiate preventative maintenance of the heat machinery of the steam piping system of the secondary circuit.”

There is, indeed, a difference: A shutdown caused by the need for urgent repairs is not quite the same as one initiated for preventative maintenance. True, there are no formal reasons to claim a an attempt at an outright lie here: The reactor was stopped by the personnel, not by the automatic protection system. The shutdown request may, too, have well been forwarded – a few minutes before the shutdown sequence…

The incident – or accident? – is reported to have been heard in the environs, too. The local publication Upryamiye Fakty (Hard Facts) describes these impressions Balakovo residents had as they witnessed, if remotely, what was going on at the plant: “On the evening of February 7, the residents of the village Natalyino were listening, wary, to the rumbling noises coming from Balakovo NPP. Even they, who were accustomed to the racket that sounded from the nuclear power plant from time to time as its reactors were being shut down, felt ill at ease hearing the unbelievable din that penetrated even the soundproof PVC window panes in their apartments. The cloud soaring high right above the plant conjured up disturbing thoughts of an accident.”

Balakovo’s head of the public information centre Natalya Bondarenko, by contrast, denies the event was an accident or even an incident. In a correspondence with Anna Vinogradova, who heads the Balakovo branch of the All-Russian Environmental Protection Society, Bondarenko insists: “The shutdown was not an incident. Reactor Unit 4 was shut down in accordance with a forwarded request to conduct preventative maintenance of the heat machinery of the steam piping system of the secondary circuit.”

Not for nothing, the authors of the article in Upryamiye Fakty couldn’t help evoking an angry paradigm: They lied, they’re lying, they’ll be lying more? in the headline to their story.

Smolensk NPP, Reactor Unit 2 (an RBMK-1000 reactor, commissioned in December 1982; engineered lifespan due to expire in 2012): Turbogenerator switched off the grid on February 9, 2011; load reduced to 50 percent. On February 10, the turbogenerator that caused the load reduction was plugged back in following unplanned repairs.

Rosatom’s Crisis Management Centre reports that on February 8, at 11:40 pm, a defect was discovered in the gas cooling system of Turbogenerator TG-4. The reactor was proceeding at a capacity of 1,000 megawatts at the time. At 02:03 am on February 9, the reactor was plugged off the grid and, following a forwarded request, put under emergency maintenance until 02:00 am the following day, Rosatom said.

Just like in the case of Balakovo, Smolensk NPP’s public information service – run, as with all Russian NPPs, by Rosenergoatom’s information department (which, again, does not provide a translated English version of its report on the organisation’s new website) – attempted to whitewash the fact that the load reduction incident was an unforeseen one, stressing, instead, the fact that there was a request for the procedure: “On February 9, in accordance with a forwarded request, power load of Reactor Unit 2 of Smolensk NPP was reduced by 50 percent due to preventative maintenance on Turbogenerator 4 (TG-4).” The report ends with a standard Rosenergoatom statement that “no violations of limits and conditions of safe operation of Kursk NPP power units have been registered.”

Once again, an attempt can be traced to conceal the fact that both the load reduction incident and the repairs of the faulty turbogenerator were unplanned contingencies.

Kursk NPP: A week-long outage to replace a seal

Kursk NPP’s public information department, run by Rosenergoatom, says the following on the incident (in Russian only): “On February 9, 2011, at 08:07 am, Reactor Unit 1 of Kursk NPP was shut down in accordance with a forwarded request in order to conduct maintenance works to replace a seal in equipment operated in a non-occupied area.”

“The reactor was shut down by personnel using a fast load reduction switch. The unit was put under urgent repairs until 08:00 am of February 16, 2011,” Rosatom’s Crisis Centre added in a statement of its own.

Notably, it is the same reactor unit that is slated, by way of an experiment, to soon be operated above nominal capacity, which may lead to further failures in the aged equipment.

Beloyarsk NPP, Reactor Unit BN-600 (commissioned in April 1980, engineered lifespan expired in 2010). Reactor proceeded at a 380-megawatt capacity between February 5 and 11 owing to “repairs on the electrical equipment.”

Beloyarsk NPP’s public information office reports (in Russian): “On February 9, 2011, Reactor Unit BN-600 of Beloyarsk NPP was brought to a nominal capacity of 600 megawatts after maintenance works were completed on the unit’s electrical machinery.” The report offered no information on the causes of the repairs.

Kola NPP’s public information office reports (in Russian): “On February 11, at 10:19 am, Turbogenerator TG-7 of the reactor unit was shut down by the automatic emergency protection system. Operating capacity was reduced by 50 percent.”

Again, the report offers no details on the incident or expected duration of the maintenance works.

It is worth noting that the same reactor unit was in downtime for six days last January owing to an another unplanned shutdown caused by a short circuit in the cable tunnel. Around 63 million kilowatt-hours was lost to the energy system between January 17 and 23.

In all, owing to outages caused by emergency trips at Reactor Units 3 and 4 of Kola NPP, as well as periods when the reactors operated at reduced capacity, the plant’s output in January 2011 was 217 million kilowatt-hours below expected levels. If all the four reactor units of the plant operated uninterrupted at normal 440-megawatt capacity, January’s energy production – combined output for 31 days – would have reached 1,309.4 million kilowatt-hours. The plant’s public information service reports 1,092.2 kilowatt-hours were generated in January.

The press service also makes a point of saying – given the underwhelming performance of last January – that the output for that month was “more than the figure for the same period of 2010.”

Ever since Chernobyl, the propaganda machine has been fine-tuned just so to be able to put a brave face on the sorriest of news.

That five out of Russia’s 32 reactors get shut down for emergency repairs in eleven days is sad testimony that the Russian nuclear energy industry is simply unfit for reliable performance. As reactor equipment gets older, more and more incidents will result in unscheduled maintenance. This does not only spell additional expenditures and unstable supplies of energy. If repairs are done in a haste in order to resume power generation and due quality of works is not provided under the pressure, more glitches will occur – and with increased frequency and elevated risks for further safe and steady operation.