Storm-induced breakdowns in power transmission lines that resulted in emergency shutdowns at Kola Nuclear Power Plant (NPP) in early July serve to underscore that continuing to run the reactors – two of which have long exhausted their operational life spans, while the other two will do so soon – is nothing short of a dangerous gamble, putting both population health and ecological safety at risk, environmentalists warn.

Published on July 23, 2010 by Andrey Ozharovsky

Kola NPP, located 200 kilometres south of the Kola Peninsula’s regional centre of Murmansk, operates four 440-megawatt VVER reactors. It supplies electricity to the region’s consumers via only two high-voltage power lines – one that goes up north, to Murmansk, and the other, going south to the Republic of Karelia, with a branch line stretching out to the town of Kandalaksha to provide power to an aluminium plant there. On July 6 and 9, heavy thunderstorms caused breakdowns in the lines, and turbogenerators needed to be shut down as a result at Reactor Units 3 and 1 at Kola NPP, respectively. Measures were taken at the plant to avoid scramming Reactor 1, but Reactor 3 still had to be unloaded and scheduled for emergency repairs.

As illustrated by the two incidents, accidents involving transmission lines may result in emergency situations at the plant as well: If the plant is suddenly rendered unable to feed electricity into the grid, the reactors must be stopped immediately, and that in itself is a risk-ridden process.

A statement posted by the Public Information Centre of Kola NPP on the official website of Rosenergoatom, the Russian nuclear power plants operator, said (quoted here verbatim): “On July 6, at 2:56 p.m. the TG-6 turbo generator of power unit No. 3 was shut down by the generator-transformer unit protection. The automatic equipment activated due to the power line cutout in Karelia. The third power unit was put into operation at capacity 5% of thermal mW.”

“There are no violations of normal operation limits and conditions of the plant power units,” the statement said.

The reactor was subsequently shut down and scheduled for emergency maintenance.

The next event, as reported by Kola NPP’s information centre on Rosenergoatom’s site, took place on July 9, when (quoted verbatim) “at 10:11 at Kola NPP the TG-2 turbine generator of the first power unit was disconnected from the power grid by activation of emergency control automatics. The automatics came into action because of power line cuts in Karelia caused by a thunderstorm. The shutdown was carried out in accordance with the specified procedure. At 10:27 TG-2 was connected to the power grid.”

Apparently, energy output was restored swiftly this time, and measures taken made sure that no load reduction or scramming the reactor was necessary. No comments were available from Kola NPP representatives on either incident, despite repeated calls placed by Bellona to the site’s information centre in the days following the events.

An accident involving a power failure at a nuclear power plant may lead to severe consequences, including core meltdown. Kola NPP had sustained power failures before: On February 2, 1993, ice accumulation on power lines caused a blackout at the plant, with the result that the reactors were shut down, but two of the four diesel generators failed to start due to malfunctioning. Natural circulation provided enough coolant to keep the reactor cooled for a period of time. It was sheer luck that no accident involving radioactive discharges into the surrounding environment occurred as a result of the incident.

According to Vitaly Servetnik, who heads the region’s largest youth environmental movement, Priroda i Molodyozh (Nature and Youth), “such events as emergency load reduction or reactor scram are especially dangerous for Kola NPP, because two of its reactors have already exhausted their engineered life spans, and the other two are on the brink of reaching the end of theirs.”

“Kola NPP is outdated and physically worn out. It’s unlikely that its safety could be enhanced even if enormous funds were spent on it by foreign sponsors or Russian taxpayers. The station needs to be prepared for closure, and the outgoing [energy] capacity must be covered by speeding up construction of wind power installations along the coast of the Barents Sea,” Servetnik told Bellona.

Local population and environmentalists want the plant closed down

In a late 2007 poll commissioned by the environmental group Ecodefense! and the Heinrich Boll Foundation to ROMIR, a representative of Gallup International in Russia and a leader in public opinion surveys in the country, 85 percent of Murmansk Region residents said they were against extending the operational lifetimes of the plant’s aged reactors. 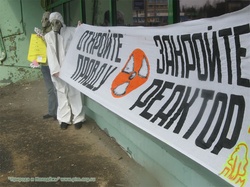 “Reactor Units 1 and 2 of Kola NPP have exhausted their design-basis lifetimes and must be taken out of commission in 2003 and 2004. The license permitting their operation beyond design-basis life spans was obtained in contravention of the legislation currently in effect, with no environmental seal of approval secured from the state, and in defiance of public opinion. An unbiased assessment of the reactors’ condition is impossible without an independent examination. At present, representatives of the nuclear industry are not in the position to offer a 100-percent guarantee that the equipment allowed to continue operation on an extended license will sustain the load and will not fail. We consider continuing to operate Reactor Units 1 and 2 a perilous experiment fraught with the possibility of unpredictable consequences in the future.

Operation of Reactor Units 3 and 4 must cease as soon as their design-basis operational lifetimes expire. To achieve that, preparation for the decommissioning process must start immediately, and a special financial fund must be established to provide means that will in due time be used for the dismantlement of Reactor Units 1 and 2 and, subsequently, Reactor Units 3 and 4. The money making up this fund must be adequate in scope to the extremely costly tasks ahead.”

The November 2009 statement distributed by environmentalists also raised the issue of excess energy feed that the plant is creating for the regional grid.

“The energy the region is producing is currently in excess of demand. Murmansk’s energy saving potential is estimated at 40 to 60 percent, or exactly the output that the Kola energy grid is receiving from Kola Nuclear Power Plant. Furthermore, scientists with the Kola Scientific Centre of the Russian Academy of Sciences confirm that conditions in Murmansk Region are very propitious for the use of the energy of wind and other renewable sources of energy.

The economic and financial crisis has intensified the problem of “pent-up output” at Kola NPP: As the grid cannot accept and distribute so much energy, the plant has to operate under necessary dispatch limitations.

In a press release posted by the Public Information Centre of Kola NPP, the plant in early July reported on the past six months of its operation, saying, in particular, that “in June 2010, Kola NPP generated 631.8 million kilowatt-hours of electric energy.”

The June figures plainly show that downtime periods are not an infrequent occurrence at the plant. That, in turn, is evidence that at least the two oldest and most dangerous reactors at the site could be safely shut down right now – with no shortages caused in energy supply and no losses incurred to the region’s energy consumers.