MOSCOW – MOSCOW – As the result of a fire at an outdoor switchgear at the Kalinin Nuclear Power Plant north of Moscow on July 23, the plant’s Reactor Block 1 was shut down. Two days later, the No. 1 unit was re-plugged into the grid.

Published on July 25, 2010 by Andrey Ozharovsky, translated by Charles Digges 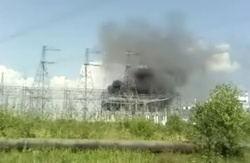 On July 23, 2010 at 3:22 pm, reactor unit No 1 of the Kalinin NPP was shut down in connection with a fire that broke out at a 750 kilovolt outdoor switch gear (ORU in its Russian abbreviation). At 3:45 pm, the fire was extinguished by the actions of manned fire division 8 and 14,” read a statement from the press office of Rosnergoatom, Russia’s state nuclear utility.

It was later made public that the cause of the fire was leaking oil from damaged and oil-filled electrical equipment. The ORU 330 and ORU 750 continue to function at full gear.

Kalinin NPP is located in the town of Udomlya, in Tver Region in Central European Russia, to the north of Moscow. It operates three 1,000-megawatt reactors of the VVER-1000 type, and a fourth reactor is under construction and scheduled to be launched in 2011.

Another fire at a transformer

In less technical terms, a transformer at the Kalinin NPP burned. There are simply no other oil-filled eletrical devices in an outdoor switchgear system. But fires at NPPs are especially complicated even when they concern the electrical and not the nuclear equipment. If the fire spread to other equipment in the switchgear unit, the entire ORU could have been damaged enough to stop functioning, which would have made power delivery impossible and would have led to a shutdown of the neighbouring reactor.
[picture1 left]

According to residents of Udomlya, which is located five kilometres from the NPP, who were interviewed by Bellona Web, there was a transformer explosion on the same ORU in the winter three years ago. The explosion was even audible in the city. The current explosion caused turmoil in Udomlya. Smoke was visible over the top of the nuclear power plant, and some residents rushed to get photos and video that were published on the internet.

Accidents with transformers can have a serious impact on nuclear power plants. A transformer explosion at the Kola NPP, in Russia’s Northwestern Murmansk region last February, caused flying debris to damage other equipment at the station. According to information obtained by Bellona Web, the Kola NPP transformer explosion not only downed two power lines but cut off the cooling of water in the on-site spent nuclear fuel storage basins situated near reactors.

However, the Russian nuclear industry refuses to acknowledge such accidents as dangerous and suggests that they be assigned a zero-level on the seven-point International Nuclear Event Scale, which charts the impact of nuclear accidents and incidents. A zero is considered a “deviation” where a “3” is a “serious incident” and a “7” is a “major accident.” Russia therefore considers the exploding transformers to be insignificant to the safety of its nuclear plants and personnel.

Is the reactor turned back on?

Rosenergoatom’s press office said that on Sunday, July 25 at 10:15 am the No 1 reactor unit was put back online after a temporary shutdown.

In all, the shutdown resulting from the fire lasted 43 hours and the grid lost 43 kilowatt-hours of power. Whether the reactor has been safely relaunched will become clear in time. Incidents potentially leading to serious emergency situations have not been infrequent at Russia’s nuclear power plants of late: Recently, Kola NPP’s No. 3 reactor, after a short shutdown, only managed to stay online for nine hours before it was automatically shut down due to yet another mulfunction.