MURMANSK — Much to environmentalists’ dismay, the lower house of the Russian parliament voted in the last week of January to pass in the first hearing a controversial new bill on radioactive waste management — a document that ecologists fear will give the nuclear industry an unchecked licence to carry on with its dangerous waste disposal practices.

Published on February 2, 2010 by Bellona 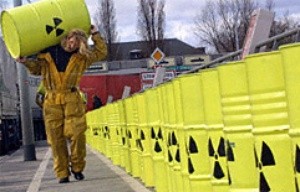 On January 26th, Russian public organisations made an open statement urging representatives of the lower house of the Russian parliament, the State Duma, and senators from the upper house, the Federation Council, to reconsider passing the law “On Management of Radioactive Waste” with the language that had been proposed by the government and adopted in the Duma’s first hearing.

While they acknowledge the very attempt to better regulate the issues of radiation safety in Russia — the country still has no law governing the management of radioactive waste and this bill will only be Russia’s third to deal with the operation of nuclear industry sites to begin with – ecologists argue that passing the law in its current draft is as big a risk to Russia’s environmental health as was the Russian law on protection of the environment — a 2001 document that de facto sanctioned imports of foreign-generated nuclear waste for reprocessing in Russia.

Russian ecological organisations say the draft has been put together to cater, first and foremost, to the narrow interests of Rosatom, the state corporation that oversees Russia’s nuclear industry, and runs contrary to Russia’s own national interests. They also proposed a number of amendments in the hope that the draft may still be revised before the parliament gathers to vote on its passage.

Prominent Russian environmentalist, academician Alexei Yablokov agrees: Injecting liquid radioactive waste underground is a highly dangerous disposal method, which is nonetheless routinely practiced at certain enterprises of the Russian nuclear cycle. Furthermore, this is done in violation of the Russian legislation on the use of water resources, which expressly prohibits such practices.

“This draft codifies the procedure for the selection of sites for nuclear repositories. All decisions that have to do with repositories — sites that will exist for hundreds of thousands of years — must only be made by way of local referenda,” said Vladimir Slivyak, co-chairman of the environmental group Ecodefense!.

According to Greenpeace Russia’s Vladimir Chuprov, one other objectionable consequence of this bill, should it be passed in its current draft, is that it will legally split Russia’s entire radioactive waste stockpiles into waste already accumulated and waste that will be generated after the law takes effect.

“This draft has no procedural provisions for who and how will finance the disposal of accumulated waste,” said Chuprov. “Combined with the absence in the draft of the principle of full financial responsibility on the part of the waste producer for the management of the generated radioactive waste, this creates the risk that the taxpayer will have to bear [the costs of disposal].”

This will mean Russian citizens will have to foot the bill for the disposal of practically all radioactive waste generated in the Russian Federation, including the waste generated by commercial companies, such as the Russian nuclear power plant operator Atomenergoprom or the nuclear fuel manufacturer TVEL, according to Chuprov.

Similar concerns were voiced by environmentalists during a January 28th press conference in St. Petersburg, where ecologists from Russia’s two major cities, St. Petersburg and Moscow, announced they were starting a national protest campaign to prevent the Russian parliament from passing the questionable bill into law.

Murmansk legislators keep mum on the critical bill — potentially, to the region’s detriment

However crucial the new bill is, it has virtually gone unnoticed by local legislators in regions where it matters most — such as Murmansk Region in Russia’s North, home to the Kola Nuclear Power Plant and quite a number of sites that remain the source of some of Russia’s most urgent problems in terms of radiation safety, including the infamous former naval base Andreyeva Bay and Russia’s decommissioned nuclear-powered fleet and refuelling vessels.

Murmansk lawmakers have effectively passed the buck to Moscow — although it is still possible that after the first hearing, the draft will be sent to Murmansk Regional Duma so that local legislators have the chance to introduce amendments.

One other entity that would be well suited to take an active part in discussing the draft is Murmansk’s Public Council for the Safe Use of Atomic Energy. This recently created public panel includes representatives of local nuclear-related industry, the regional government, and the federal industrial safety oversight agency, Rostekhnadzor. Unless the council’s aim is to convince Murmansk residents that nuclear energy is the path to a bright energy future, the members of this panel should be expected to break their silence over this major legislative development.

Indeed, Murmansk is quite intimately acquainted with the issue of radioactive waste. Many enterprises on the Kola Peninsula — Kola NPP, the nuclear icebreaker operator Atomflot, the shiprepairing and vessel dismantlement yard Nerpa, the regional radioactive waste management company SevRAO, among other companies — have both the expertise to offer and a personal stake in seeing to it that the new bill helps deal efficiently with the decades-old headaches of storing, managing, reprocessing, and disposing of radioactive waste in the region.

“In late 2009, Rosatom announced its intent to build a radioactive [waste] repository in Murmansk Region,” warns Vitaly Servetnik, chairman of the local environmental organisation Nature and Youth. “Kola NPP’s waste is currently shipped across half of the country to [the spent nuclear fuel reprocessing plant] Mayak [in the Urals]. Soon Murmansk residents, too, will be able to get a taste of that ‘beautiful’ thing that the ‘peaceful atom’ is. And nobody will ask them whether they want it or not.”

The main issue for Murmansk, then, is how and where the vast stockpiles of radioactive waste it has accumulated will be stored, and whether the local population will have a say in the decision-making process with regard to the construction of storage facilities and repositories. With all these important decisions being discussed in the Russian capital, will Murmansk be willing to hand what levers of influence it may have over the outcome of the proposed legislation to Moscow?