The 11th Council Meeting of European Green Parties in Malmö, Sweden this weekend issued an excoriating joint statement on the prospective construction of the Baltic Nuclear Power Plant that Rosatom, Russia’s nuclear state corporation, plans to build in the Russian enclave of Kaliningrad.

Published on October 18, 2009 by Charles Digges 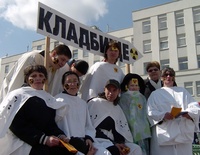 Meanwhile another Swedish conference on nuclear waste in Stockholm spoke out heavily against the recent arrest of Andrei Ozharovsky, a Russian nuclear activist who was plucked by police out of a public environmental impact hearing in Belarus while distributing a report that he and other physicists co-authored against the prospective construction of a nuclear power plant in that country.

Ozharovsky is a nuclear physicist with the Russian environmental group Ecodefence, and a frequent contributor to Bellona Web.

He was arrest on October 9th in Belarus’s Grodno Region for distributing a report entitled “Critical Notes on the State Environmental Impact Study for the Belarus Nuclear Power Plant” at public hearings on the construction of the plant.  He was found guilty of disturbing the peace by a local court and sentenced to seven days in jail, during which time has was not allowed to consult with a lawyer. He was released on Friday.

The European Greens, also known as the United Green Parties of Europe, said in their Malmö statement, authored by Ecodefence, that they “are deeply concerned” about the Baltic NPP project, which has been met with overwhelming negative opinion by the local population.

Indeed, over 70 percent of Russians have expressed in polls commissioned by environmental organisations thier opposition to the building of further nuclear power plants.

Ecodefence co-chairman Vladimir Slivyak speculated in an email interview that the statement would have wide resonance. The European Greens is a federation comprised of many Members of European Parliament who represent their constituent countries’ Green political parties – including Germany’s Rebecca Harms, who is a tireless crusader for Russian environmental and human rights.

Of special concern about the Balitic NPP’s environmental impact study, said the European Greens, was the type of reactor – the VVER-1200 – which is based on technology that is nearly 40 years old, meaning the reactors would be generation two plus, while other reactor projects in Russia are Generation Three reactors.

The problem of waste storage is pandemic in the nuclear industry, as no nation has yet developed a method to store radioactive waste and spent nuclear fuel safely for longer than 60 years.

The Greens also said in their statement that even though hearings were held, many members of the public were largely restricted from taking part in them, leading to “a lack of democratic decision-making.”

To bolster support for the plant, said the Greens’ statement, local media in Kaliningrad were hijacked into presenting heavily pro-Baltic NPP coverage by Rosatom, which distributed erroneous information.  Media also engaged in smear campaigns against environmentalists opposing the plant.

Another wrench in the works for the plant, aside from its unpopularity in Kaliningrad – despite the effort of Rosatom to sell it in a positive light – is that the plant’s prospective location borders on Poland and Lithuania.

Under requirements of the Espoo Convention – which Russia signed in 1991, but has not ratified – Rosatom must solicit input to their environmental impact study from neighbouring countries, and how the project might effect their own environment. Rosatom has thus far refused to adhere to this procedure relative to the Baltic NPP.

The Green’s Malmö statement demanded that new public hearings on the Baltic NPP be organised both in Kaliningrad, as well as Poland and Lithuania.

While the Malmö international conference on nuclear waste storage problems was underway, its participants issued a strong resolution protesting the arrest of Ozharovsky – who managed to be present for the conference on Saturday.

While jailed in Belarus, Ozharovksy was able only to speak to a public prosecutor, whose impact on the case is unclear. He also was visited once by a member of the Russia diplomatic mission in Belarus at Bellona’s urging, but the intercession of Russia’s foreign affairs ministry had minimal effects.

“We express our deep concern with the human rights violation, deception and falsification that were allowed by the Ministry of Energy, the city administration and police during the so-called “Public Hearing on the Environmental Impact Assessment” of October 9th in the town of Ostrovets, Belarus,” read the resolution.

“We express our solidarity with the anti-nuclear movement of Belarus and call on Belarusian authorities to refrain from repressing researchers, activists, environmentalists and scholars from speaking critically about the use of nuclear energy and the construction of a nuclear power plant in a country that bore the brunt of the Chernobyl disaster,” the resolution continued. “We are convinced that any development of nuclear power in the Baltic Sea region must be stopped in order to avoid possible accidents, catastrophes and radioactive contamination."