MOSCOW – Russia’s state nuclear corporation Rosatom continues to push for the new Kaliningrad power-generating site despite the absence of any guaranteed demand for its energy. As a recent report shows, the industry plans to spend $13 billion on the most expensive – and most unneeded – nuclear power plant in the country’s history, warns Bellona’s regular contributor and co-chairman of the ecological group Ecodefense, Vladimir Slivyak, in this comment.

Published on September 2, 2009 by Vladimir Slivyak, translated by Maria Kaminskaya 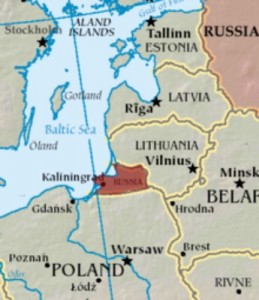 An agreement on future construction was signed last year between Rosatom and the region’s government, and last July a public hearing on the project was held in Neman, marked by several protest rallies in neighbouring districts.

Threatened by the massive protest movement, the organisers of the official public hearing filled the hall where the proceeding was scheduled to take place with specially trained audiences: As testimony by local residents reveals, several enterprises in the region had ordered employees off their working places in the middle of the working day and mass-delivered them to the site of the hearing by buses.

In Sovetsk, a larger city located around 10 kilometres away from Neman and some 18 kilometres off the future construction site, local legislators on July 7 took the initiative of holding their own public hearing on the subject. Pressure from the regional government followed, however, and the hearing was cancelled. Ecodefense has filed a complaint with the local Prosecutor’s Office, demanding that “measures of prosecutorial response” be taken with regard to what Ecodefense challenges was a fact of pressure exerted by one of the ministers of the regional government by way of signing a letter to Sovetsk legislators which contained a “recommendation” to cancel the hearing.

But one of the more eyebrow-raising snippets of fact in this whole story is that there is yet to be delivered any federal decision regarding the commission of the Baltic NPP project. Russian federal government documents make no mention of this construction – it simply does not exist.

One likely reason for that is that by the time the first reactor of the Baltic NPP goes online, the region will be provided with energy from other sources well above its needs. In order to obtain a go-ahead for the Baltic NPP construction from federal authorities, Rosatom will have to demonstrate that the site’s power output will find demand in Europe – or else the corporation will be hard-pressed to argue the necessity of spending €5 billion to 6 billion on the project. No confirmations of any interest in the Baltic NPP’s energy have so far come from Europe, however. Furthermore, according to certain documents recently made public, the plant’s cost may turn out to be far greater than initially reported.

Late last July, Ecodefense publicised a number of documents proving that Kaliningrad Region has no need in the energy expected to be provided by the Baltic Nuclear Power Plant. Already by 2013, as the region’s approved investment plans reveal, the energy system of Kaliningrad Region will be producing 1,700 megawatt of electric power – a large enough amount to cover the region’s estimated 1,200 megawatt in energy demand. Even in 2020 this output will be more than sufficient to cater to the region’s needs. Kaliningrad is expected to have this supply at its disposal after the second generating unit of its central gas thermal power plant goes online in 2010 and five peat-burning thermal power plants are added to its energy system in 2013.

It turns out, therefore, that Rosatom’s Baltic NPP, to be erected at the Russian border with the European Union, is meant for the sole purpose of exporting energy to neighbouring states. That much, at any rate, is stated in a report entitled “Expert review of the Baltic NPP construction project” and authored by Inter RAO UES, formerly RAO UES of Russia, which is an electric power trader on both the domestic and foreign markets and a leading exporter and importer of electric power in the country.

Inter RAO UES’ main shareholders are Rosatom and national nuclear power plant operator Energoatom, the Baltic site’s future head company (57.3% shares), and its stated mission is “to organize cross-border deliveries of electric power, [and] provide it to consumers in this country and abroad.” Yet, atomic industry officials have made repeated statements asserting that the new nuclear site to be built on the border with Lithuania is extremely critical to cover the energy needs of Kaliningrad Region. One such claim, in particular, was made by Energoatom’s Deputy General Director Sergei Boyarkin at the Neman hearing on July 24th.

Further elaborating the clearly stated intent to sell the Baltic NPP’s energy abroad, the Inter RAO UES report goes on to detail the anticipated customer base: Power lines are projected to link the future nuclear power plant with destinations in Lithuania, Poland, Sweden, and Germany. Baltic energy is likely to be exported to Belarus, as well. With all of these projections in place, Russia does not even have preliminary agreements on energy purchases signed with any of these countries.

As the Inter RAO UES report states further, the project’s overall cost approaches $12.1 billion to $13.25 billion, including the costs of building infrastructure and power lines, but excluding the expenses that dismantling procedures will incur once the reactors have exhausted their engineered life spans. According to Boyarkin, the latter carries a price tag equivalent to that of building the plant in the first place.

The project of the Baltic NPP has already drawn pungent criticism for what has been viewed as poor project documentation. Project developers failed to deliver any comprehensive information on ways to manage the plant’s nuclear waste, on dismantling the reactors once they are due for decommissioning, on any potential risks associated with major accidents, or population evacuation strategies should an accident occur.

The choice of the construction site, too, raises doubts as groundwaters on the location are not deep enough underground to guarantee safety. Yet another concern is that the future nuclear power plant is slated to be built in an area lying under a major international air route, but its reactors are not designed to withstand the impact of a large passenger vessel in case of a plane crash. Rosatom seems to have done a sloppy enough job even when evaluating the chosen construction site while preparing the project.

The state corporation proposes spending around $13 billion in budget funds on the future Baltic NPP even though no guarantees exist that the plant’s energy will be in demand to anyone. The issue of disposing of nuclear waste still remains one of the world’s unsolved problems, as does the task of designing a hundred-per-cent safe nuclear reactor. Yet, while Russians keep losing jobs to the endemic economic crisis, the atomic industry is bent on going all-out for the most expensive – and most unnecessary – nuclear toy in the Russian history.