MURMANSK – Non-government organisations and representatives of anti-nuclear groups were turned away from public hearings in the city of Navashino on the possible environmental impacts of building the first two reactors of the Nizhny Novgorod Nuclear Power Plant, some 250 kilometres Northeast of Moscow, and two prominent activists were plucked from the environmental impact study and detained by police.

Published on September 6, 2009 by Anna Kireeva, translated by Charles Digges 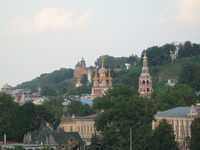 The public hearings were arranged by Nizhny Novgorod Regional authorities in conjunction with Russian State nuclear corporation Rosatom in the city of Navashino.

Local residents  turned out to oppose the plant at the open hearings, as well as representatives of Russia’s Ecodefence environmental organisation – but Ecodefence representatives were the only ones who were not allowed to enter.

Prior to the beginning of the public hearings, an announcement was distributed among the media saying that fortified security measures surrounding the even would be in place.

“In order to avoid unsanctioned breaches” into the building were the open hearing were being held, metal barriers had been erected, and some180 police were guarding the hearings themselves, said the announcement.

While making their way to the hearings, Ecodefence co-chairman Vladimir Slivyak, and the group’s physicist Anredi Ozharovsky were detained by police for no reason that the police would give. The activists were taken without a warrant or order to a police precinct, where police confiscated the information they were carrying about the Nizhny Novgorod Nuclear Power Plant.

Four hours later, the activists were released without charge. “They simply held us until practically the end of the hearing and let us go,” Slivyak told Bellona Web. “All they gave us was a protocol about how they had seized our commentary on the public hearing and stickers that read ‘No to nuclear power.’

After their release, Slivyak and Ozharovsky filed a complaint against the police with a demand for an official explanation of their detention. And, in an odd twist, the confiscated materials were returned to the activists in a sign of what they said was a confirmation that what the police had done was illegal, as the materials contained nothing suggesting provocative actions against the nuclear project.

The Nizhny Novgorod Nuclear Power Plant is included in the  Russian government’s “General Scheme for the Construction of Electric Energy Installations Until 2020,” but is currently only at the review stage.

It is assumed that the first stage of the nuclear station will consist of two reactor blocks. Each reactor will supply 1170 megawatts of power. The first is scheduled to come online in 2017.