MURMANSK – The Kola Nuclear Power Plant in Northern Russia keeps getting ill-obtained extensions on the long-expired operational life spans of its aged reactors. Yet Murmansk prosecutors – once supportive of environmentalists’ claims of the extensions’ illegality – seem to have dropped the ball on enforcing due diligence in the operation of the site.

Published on August 3, 2009 by Anna Kireeva, translated by Maria Kaminskaya

Clean bills of health keep coming despite contentions of illegality
An official press release from Murmansk Regional Prosecutor’s Office stated the results of an inquiry that established the following: On March 2nd, 2009, a license was issued by the Federal Service for Environmental, Technological, and Nuclear Oversight (Rostekhandzor) under registration number GN-03-101-2049, authorising the open joint stock company “Concern for the Production of Electrical and Thermal Energy at Nuclear Power Plants” (“Energoatom” Concern) to proceed with operation of the nuclear installation at Reactor Block 1 of the Kola Nuclear Power Plant. The license is valid until July 6, 2018.

“Based on the findings of the inquiry undertaken, no grounds to initiate measures of prosecutorial response have been determined,” said the prosecutor’s office.

Translated into plain language, this means that Russia’s nuclear power plants operator Energoatom is now free from any legal constraints to continue operating a reactor that went online in 1973 and whose design operational lifetime expired six years ago.

Another 10-year extension – until December 20th 2019 – was also granted by Rostekhnadzor for Reactor 2 of the same plant. The decision came down on June 30th 2009, one day before the reactor, launched in 1974, reached its final expiration date. Energoatom received the new license to continue running the reactor on June 29th.

Purely environmental concerns aside, both VVER-440 reactors of the Kola Nuclear Power Plant (Kola NPP), built to run for 30 years and slated for shutdown in 2003 and 2004, respectively, could only be legally licensed to remain online provided that a prior federal environmental impact study ascertained that there were no risks to prolong their operation. Conducting such evaluations was made obligatory for such cases by the Russian legislation.

However, the first five-year extensions were granted for the reactors in 2003 in clear defiance of this requirement. Supporting environmentalists’ claims, regional prosecutors in Murmansk then made several attempts to force Energoatom and the regulatory agency to comply with the law – all to no avail.

Now that new extensions have been issued, Murmansk prosecutors seem to have lost their law-upholding verve altogether.

“Rostekhnadzor has once again issued a license authorising reactor operation beyond its design-based lifetime without conducting a state-mandated environmental impact study required by the law,” said Vitaly Servetnik, chairman of the ecological group “Environmental and Youth,” a Murmansk-based organisation that has been very active in keeping the public eye on the controversy surrounding the Kola NPP.

“The environmental impact study procedure includes an evaluation of potential risks to the environment as well as public hearings, but neither of the two has taken place. And it was exactly that – conducting such a procedure – that prosecutors earlier demanded, twice. What changed this time? Nothing, apart from the prosecutors’ stance. One can only guess what their reasons were for such a drastic reversal of legal opinion,” Servetnik said.

The protest
Despite law enforcers’ pliancy, Environment and Youth continues to bring the dangers of extending the operation of the old Kola reactors to the forefront of public attention. At the end of June, activists staged a picket in downtown Murmansk, adamant to keep asking the uneasy questions that do not go away, however long ignored.

A five-meter banner reading “Old reactors, new Chernobyls” was unfurled at the scene of the protest, centred among half a dozen placards demanding an environmental evaluation study for the illegally operated reactor and reminding passers-by of the risks of nuclear accidents and the still unresolved issue of what to do with the nuclear waste that the atomic industry generates.

Activists had brought a two-meter scale mock-up of the Kola NPP and sounded a symbolic “nuclear alarm clock” that triggered a plume of smoke and sparks from the model. The “smoke show” did not go unnoticed by the onlookers, some of whom joined the protest and took their place beside the protesters, holding signs. The fake “explosion” was accompanied by a rhymed chant, which could be roughly translated as “Old reactor now expired – operation will backfire! Old reactor good no more – radiation at the door!”

The rally ended with a resolution to address the governor of Murmansk Region, Dmitry Dmitriyenko, with a demand to bring to an end the unlawful practices in his constituency – namely, the Kola plant’s obtaining its operational licenses in circumvention of the environmental legislation. Dmitry Ishchenko, head of the regional government’s Department for Information Policies and Public Relations, was chosen as the recipient of the “nuclear alarm clock” and the accompanying official petition.

Claims of competitive infighting and other concerns

Podorozhnik (Plantain), a Russia-wide NGO, offers an unusual take on both Environment and Youth’s activities brought to highlight the operational issues of the Kola NPP and the plant’s operational health per se.

“I assume with a high degree of certainty that this action was instigated by our foreign neighbours. We all know that the Norwegian Ministry of Foreign Affairs is the benefactor behind the environmental organisation Bellona, which is active on the Russian territory,” chairman of Podorozhnik’s Supreme Council, Yury Raptanov, said.

In Raptanov’s opinion, the protests in Murmansk are a manifestation of underhanded competitive strategies. But even though Bellona – a completely separate entity – has not in any way associated itself with Environment and Youth’s protest campaign, one wonders if Raptanov’s concerns may be traced to Norway’s cautious approach to what can be expected of the Kola NPP’s future with the current dynamic at hand. 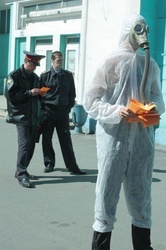 A recent statement from the Norwegian foreign ministry indicated Russia’s northern neighbour considers the two oldest reactors of the Kola NPP unsafe for further operation and in need of being taken out of commission.

According to Anne-Kirsti Karlsen, deputy director of the Norwegian foreign ministry’s Department for Security Policy and the High North, Norway maintains “a good dialogue with the Russian authorities regarding the situation with nuclear safety on the Kola Peninsula, including the issue of the future of the Kola NPP.”

“For us, the main task has become ensuring the shutdown of the two oldest reactors,” Karlsen said.

For their part, representatives of the Kola NPP like to mention the successful cooperation they are enjoying with the Norwegian Institute for Energy Technology, which works with the development of nuclear technologies, among other areas of research. More than fifty projects have been initiated at the Kola NPP with the institute’s assistance – though few of them have had to do with the two aged reactors.

Altogether, Norway has spent $13.5 million on various projects aimed at safety upgrades at the site and it would not seem unreasonable to expect Russia’s partner and one of closest neighbours to voice concerns over the plant’s technological reliability and safety.

Yet, Norway does not build, sell, or operate commercial nuclear reactors – and that very fact casts doubt on Raptanov’s suspicions of unscrupulous competition on Norway’s part.

Raptanov, though, has other arguments to support the dim view he takes of the campaign against extending the operational life spans of the Kola reactors.

“Not only in Russia, but across the world, too, the operation of sites of the atomic industry is, as a rule, extended after a proper examination by specialists,” he said. “From what I understand, the Kola NPP can run safely for a long time yet.”

World experience, however, does offer contradiction to Raptanov’s claims. In Germany, for instance, the Bruno Leuschner nuclear station in Greifswald – also known as Lubmin – was the largest nuclear power plant in East Germany before closure shortly after the German reunification. It used to run VVER-440 reactors – the same type as those at the Kola NPP – which in late 1989 were found inconsistent with safety standards and due for costly retrofitting. A decision was made subsequently to abandon further development of the site and close it down.

Experts know that a multitude of factors influence the operating safety of reactors of the VVER type. One of the fundamental ones has to do with radiation-induced embrittlement of the reactor’s metal structures. A reactor’s propensity toward embrittlement means the risk of cracks or ruptures forming unpredictably in one or other area of the reactor block. Conducting their safety examination of the Greifswald site, German specialists concluded that no technological means available would help solve the embrittlement problem completely.

Andrei Ponomarenko, nuclear and radiation research program coordinator with Bellona’s Murmansk branch, adds that as Reactor 1 and 2 of the Kola NPP were being completed in 1973 and 1974, “no control was in place over the content of copper in the welding seams, and the content of phosphorus in them is even higher.”

As reactors are usually operated in either a standard or off-normal mode, “reactor components sustain high cyclical stress loads due to temperature and pressure fluctuations. Extending the operation of reactor resources makes it impossible to guarantee the same reliability in the functioning of its systems and mechanisms as new equipment provides,” he concluded.