KALINGRAD, Russia –Public hearings to debate the risks and benefits of building a new nuclear power plant in Kaliningrad turned into a Soviet-era party meeting, complete with obligatory enemy hate rituals and proclamations of the bright future ahead. The following is an eye-witness account by a Bellona Web contributor.

Published on August 7, 2009 by Galina Raguzina, translated by Maria Kaminskaya 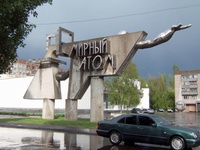 “The impression was that there are very many adults out there who still believe in Santa Claus and Little Red Riding Hood,” was environmentalists’ reaction summed up for Bellona by Linas Vainius of the Lithuanian Green Movement, which is a coalition uniting environmental groups in the former Soviet republic of Lithuania.

The Santa Claus in this instance is the tale of the impending construction and operation of the Baltic Nuclear Power Plant (NPP), planned to be erected in Kaliningrad’s Neman Region, some 15 kilometres from European Union territory. The idea of building a potentially hazardous energy site is being actively promoted by the Russian nuclear state corporation Rosatom, to the chagrin of many both in this westernmost Russian enclave and neighbouring countries, such as Lithuania.

Organised by Rosatom, the hearings shed little light on what assessments have been done of environmental consequences of operating the future nuclear energy plant – these concerns were mostly absent both from reports presented by project designers and from statements made by public participants.

The keynote speaker, Project Chief Engineer Ivan Grabelnikov, focussed his presentation on the reasoning behind the perceived necessity of building the plant – namely, the need to stave off the eventuality of an “energy blockade” and to raise the standard of living in the region. As far as any environmental impacts were concerned, the state of environment in Kaliningrad left much to be desired in the first place, in Grabelnikov’s view, while with the construction of a nuclear power plant, “the situation was bound to improve even, since cleanup of nearby [wastewater] runoffs would be organised.”

Taking the podium after Grabelnikov, Igor Osipiants from the Russian Academy of Sciences’ Nuclear Safety Institute, informed the audience of data showing that local residents’ health was in a disturbing condition. No particular recommendations were available in his report to make conclusions of whether a nuclear power plant was unlikely to make matters worse as the population’s health had hit rock bottom anyway – or whether a nuclear site, in Osipiants’s opinion, would rather have a remedial effect on health statistics.

Representatives of the public had their chance to speak after the official reports. The crowds present at the hearings had apparently been ordered off their working places for the day and mass-delivered to the event by buses in a manner well remindful of May 1st celebrations of the Soviet time. They had been instructed to take all seats that were unoccupied. Half an hour prior to the beginning, entire rows of empty seats were reserved – and guarded stringently – for certain unidentified guests. Those who came to voice their opposition to the project were left fighting an uphill battle for every single seat; many never secured any and were forced to leave.

As the “pro” and “con” balance went, it seemed safe to assume that the “pro” speeches that followed had been vetted as much as the attendance list – edited, likely, by someone’s assertive hand. The general style of public participants’ statements sounded uniform enough to fuel such suspicions. Voiced by various speakers with ties to either the regional administration or local headquarters of United Russia – the party behind the ruling political elite, which has all but forced any other political movements in Russia to the edge of non-existence – the familiar rhetoric centred on that aged myth of the gentle-hearted tsar, Rosatom in this case, who will come and solve all the social sores of the region. The main argument expressed by the proponents of the project was the hope for the new jobs that the Baltic NPP would offer.

“We are doomed for peril here, we have nowhere to [turn to], kids are being left in the care of their grandmothers, or even to fare on their own,” said Nadezhda Kudimova in her emotional pro-NPP speech. The former school principal from Neman Region suggested the plant’s future head company, national NPP operator Energoatom, open a vocational school in the area to offer courses in atomic energy specialities.

In Vainius’ opinion, however, one would do better without placing all one’s bets on the “social bonuses of nuclear energy.”

“I am very well familiarised with the social situation in the town of Visaginas,” Vainius said, referring to the home town of Lithuania’s only nuclear power plant, Ignalina, slated for shutdown in December 2009. Closing the Ignalina plant was one of the conditions of Lithuania entering the European Union, however, nuclear industry supporters are hopeful they might yet succeed with extending the plant’s engineered lifetime.

An alternative idea of building a second stage of construction at Ignalina has also been in the works.
“No miracles happened there that the construction of a nuclear power plant was supposed to bring,” Vainius explained.

“Engineers who work at the plant receive good salaries, but in the town itself, there still are a lot of social problems, problems that did not go away and continue to accumulate. Among these are high unemployment rates among women since there aren’t too many jobs for women either at the plant or any of its satellite companies.”

The environmentalist warned that only high-skilled specialists could count on big salary numbers and professionals like these could be expected to transfer from other nuclear power plants for work at the Baltic NPP – meaning that it was unlikely that all of those present at the environmental impact hearings would be able to receive the jobs and the benefits they were hearing about at the event.

As if to confirm his predictions, Director of Rosatom’s Department for Communication with Public Organisations and Regions Igor Konyshev, and Energoatom’s Deputy General Director Sergei Boyarkin both indicated in an interview given to the popular Russian daily Komsomolskaya Pravda a few days prior to the hearings that although Energoatom intends to attract local human resources both at the stage of construction and later for the operation of the plant, jobs would likely be available to workers from the soon-defunct Ignalina as well.

But where any social perks associated with the rise of this new big employer in the region are for now as chimeric as Santa Claus’ elves, the radioactive waste generated in the course of operation of any nuclear power plant is very real – and brings danger not only to the several hundred employees who work at the site but to many future generations as well.

“When we asked those responsible for nuclear safety [in Lithuania] how they were going to solve the problem of nuclear waste accumulated in the 25 years of operation of Ignalina NPP, they told us frankly that there are no such technologies anywhere in the world and that, hopefully, our grandchildren or our grandchildren’s children would come up with something, what to do with this waste,” Vainius said. “They’d be happy to send all of this waste to Russia, but it’s not working out.”

The environmental impact study on the Baltic NPP project has all but nine lines of text to say on the issue of spent nuclear fuel that would be generated by the plant. The passage extends no further than perfunctory statements such as: “All operations with spent nuclear fuel rule out any contact it may have with the environment.” The study contains no contingency analysis nor any recommendations to mitigate the consequences of such contingencies should they take place. It also offers no description of the decommissioning procedure for the plant nor any treatment of the site’s potential environmental impact across the Russian border.

Altogether seven lines are dedicated to the concept of the project’s feasibility. The future site is deemed expedient for reasons of “energy demand prognoses” and “export supplies,” but no exact data are available to back these assertions.

Andrei Ozharovsky, a nuclear physicist and expert with the environmental group Ecodefense, has perused the environmental impact study extensively. At the hearing, he called the study inadequate and said: “You cannot trust this, and I sincerely recommend you not to agree to this project, or at least to demand further work on it.”

True, many Kaliningrad residents do not have much trust to begin with. Despite attempts on the part of the hearings’ organisers to create the illusion of complete support behind the project, at least 1,350 signatures were collected in protest of the Baltic NPP at three rallies that took place prior to the hearing in Sovetsk, a town that will end up just 20 kilometres off the site where the plant will be built.

Alternative public hearings have also been initiated on the issue by residents of neighbouring districts.