ST. PETERSBURG – Russia will over the next two years drastically improve its position on the international nuclear market said Sergei Kiriyenko, chief of Russia’s nuclear state corporation Rosatom while standing in front of a banner reading “Rosatom Brainwashing Here.” 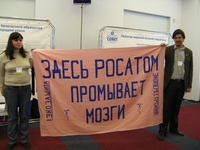 The banner was unfurled by environmental activists while Kiriyenko was speaking at the international “Atomic Energy, Society and Safety” conference – or so called “dialogue forum” in St. Petersburg last week.

The forum was set against the backdrop of the 23rd anniversary of the Chernobyl disaster, where, on April 26th, 1986, the forth reactor block exploded, constituting the world’s worst nuclear disaster.

But the nuclear industry in Russia and worldwide has embarked on a massive PR campaign to present nuclear power as everything from the world’s savior from the ravages of climate change to the single route to world nations’ energy independence.

The accounts of the nuclear industry are, at best, questionable, but Russia is pressing especially hard to display what experts call dubious successes in the face of a crushing world financial crisis and apocryphal evidence that Russia’s nuclear industry is financially solvent.

Meanwhile, Russian environmentalists have begun to openly mock the claims of the once powerful nuclear industry, and show up its grandiose claims as noting more than useless paperwork and and unpaid credits on ever reddening balance sheets.

Kiriyenko said that Rosatom has already completed a host of agreements with leading world corporations working in the nuclear sphere. An agreement was recently signed with the German engineering firm Siemens, and a similar agreement with Japan’s Toshiba, as well as other Japanese firms, is being drawn up and is expected to be signed in May.

“We are reckoning with an accounting of those contracts that we have today with the United States Department of Energy, with the US State Department on a project on agreement of cooperation on peaceful atomic energy use between the Untied States and Russia which by autumn may be returned to US Congress for consideration,” said Kiriyenko.

“This project is just one more chance for us to realise a host of results, contracts and agreements prepared with American companies.”

Former President George Bush recalled the civilian nuclear agreements from consideration by Congress in September after the Russian-Georgian conflict over Southern Ossetia and Abkhazia.

“In order to achieve full cooperation with foreign companies,” Kiriyenko said,” we have taken an important step and separated the military and the civilian sectors of our nuclear industry. We understand that peaceful nuclear energy is a market and we have made our choice.”

Kiriyenko told the “Atomic Energy, Society and Safety” conference that despite the financial crisis, Russia will fully facilitate atomic and radiation safety. In 2009, some 17 million roubles ($512,000) will be spent for this purpose, said Kiriyenko, nothing that all plans for building new nuclear reactors still stand.

Even in the conditions of the current global economic meltdown, the scale of Russia’s plans to build 26 new nuclear reactors have not changed.  The maximum fluctuations that can be expected, said Kirieynko in a misstatement will be seen in the real balance of electric energy use in the regions .

During the conference, as Kiriyenko was completing his remarks, a number of activists approached him and unfurled a banner reading “Rosatom Brainwashing Here.”

Kiriyenko himself halted his security that demanded the activists cease their protests, and accepted from them leaflet in which they outlined their reaction to the “dialogue forum.”

“The forum opeing today in St. Petersburg on the eve of the anniversary of the Chernobyl accident has been convened sanitize the nuclear industry. It is attempting to create the impression of a dialogue, when in reality it continues to violate the laws of Russia and ignore the arguments of environmentalists,” said Rashid Alimov of the St. Petersburg anti-nuclear group ECOperestorika, and former editor of Bellona’s Russian Web pages.

“In violation of Russian legislation, the Mayak Chemical Combine continues to discharge radioactive waste into natural water sources. The import of uranium tails (depleted uranium hexafluoride) is also dubious from the point of view of the law,” he said.

“Financing for relocating victims from radioactively contaminated territories in the Chelyabinsk Region has dried up. Instead of spending money on expensive PR campaigns, Rosatom ought to send funding for the solution of real problems created by the nuclear industry,” said Vladimir Slivyak, co-chair of the Russian environmental group Ecodefense and a Bellona Web contributing writer.

“The assertions of Rosatom’s general director about the international success of Rosatom must be taken with a grain of skepticism,” said Bellona Russian nuclear industry expert Igor Kudrik. “Practically all the reactors that Russia is building abroad are being built on credit, and frequently at (Russia’s) own expense and at a loss to itself.”

“As concerns cooperation with the United States, there are many questions. All of Russia’s agreements with the United States were reached under the Administration of George Bush. Now there is a new president, and his attitude to nuclear power is far from unequivocally positive,” Kudrik said.

After his appearance, Bellona appealed to Kiriyenko to review the possibility of discussing the Leningrad Nuclear Power Plant 2. Kiriyenko suggested that an expanded seminar for Bellona representatives take place in which leading nuclear and environmental specialists, as well as representatives of NGOs, should participate.