How to perform CPR on a Chernobyl-type reactor: Leningrad NPP’s own recipe for disaster

The Leningrad Nuclear Power Plant (LNPP) will in 2009 take one of its four reactor blocks offline for six-month-long repairs and preparations to extend the reactor’s operational life span. Performing works of such calibre on an outdated Chernobyl-type reactor is nothing more than a dangerous experiment that may lead to catastrophic consequences.

Published on January 7, 2009 by Andrey Ozharovsky, translated by Maria Kaminskaya

In and of itself, the planned renovation carries the risk that the technologically obsolete and decrepit reactor will become vulnerable to serious accidents. This risk will only increase during subsequent operation, after the reactor’s design is further reworked to accommodate modifications that have not even received proper approval in accordance with state requirements for environmental impact assessments.

What will the renovation works entail?

In a statement made at a press conference on November 20th 2008 and cited by the Russian news agency Interfax Severo-Zapad, Vadim Ryabov, general director of the engineering and construction concern Titan-2 – the subcontractor hired by the LNPP to perform the repairs on its Reactor Block 4 – said the nuclear power plant has scheduled the start of the renovation for next May.

“The planned time period for the shutdown of Reactor Block 4 is May 2009, and the contract should be fully executed in 2010,” said Ryabov, who is also board chairman of the holding Titan-2, the subcontractor company’s parent structure. The reactor will be taken offline for more than six months. Ryabov’s statement did not include any information on the costs of repair works or modifications planned to prolong the reactor’s engineered lifespan.

Some of these modifications include installing automatic cooling and automatic shutdown systems, as well as upgrading the control systems, which will then be expected to allow the reactor to remain in safe operation for another fifteen years.

Is there any safe way to operate Chernobyl-type reactors?

Meanwhile, the very notion that it is possible to operate safely the morally and physically outdated reactors of the type RBMK-1000 – the same that was used at the Chernobyl Nuclear Power Plant that on April 26th, 1986 became the ground zero of the worst nuclear catastrophe known to the world to date – is cause for doubt both among nuclear experts and environmentalists.

Yet, the obsolete RBMK-1000s still used in the LNPP’s Reactor Blocks 1 and 2 have already been approved for continued operation beyond their engineered life spans. Extensions on their licenses have been issued in absence of any state environmental risk assessments by Rostekhnadzor, the federal supervision entity charged with overseeing industrial safety standards and practices, including those adopted in the nuclear industry. 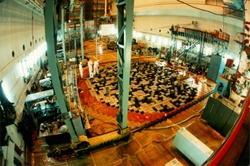 This is not the first time that an accident happened because of ongoing repair works. On May 28th, 2000, the reactor of the LNPP’s Reactor Block 1 was shut down because of a piece of rubber that had been left by accident during repairs performed on the control and isolation valve and had found its way into the fuel channel.

In August 2002, as Reactor Block 3 was undergoing major planned repairs, 241 used – and thus practically defective – ball-type flow meters were installed on the fuel assembly channels instead of new ones. According to Kharitonov’s report, “to conceal the fact that these flow meters had already been used, they were put through decontamination and electro-chemical polishing in the LNPP’s chemical service shop. These operations rendered the sensitive devices unsuitable for use. The documentation accompanying 231 out of the overall number of the used flow meters was tempered with before the meters were installed on the fuel assembly channels. On August 5th, 2002, after the repairs, while bringing the reactor block to an increased capacity, the defective meters started to fail. This resulted in a loss of control over the flow of water through the reactor’s fuel assembly channels in which the used meters had been installed.” Fortunately, the reactor was shut down in time and a serious accident was averted. To be sure, the actual shutdown operation is not a completely safe procedure, either. One should bear in mind that the worst radiation catastrophe known to humankind to date – the Chernobyl disaster – occurred exactly when the plant’s Reactor Block 4 was being shut down for planned repairs. RBMK-1000s’ unreliable design makes such transitional processes as decreasing the reactor’s capacity or taking it offline altogether precarious enough that they can lead to loss of control over the reactor and, by extension, an accident with far-reaching consequences.

Altogether in 2007, four incidents involving failures of various kinds took place in the plant’s operation; in 2006, there were seven such incidents. “Most of the disturbances in the LNPP’s operation in 2007 were prompted by such fundamental causes as defects in management, defects in the organisation of the plant’s operation, as well as designing defects,” says the Rostekhnadzor report. It is unclear how these underlying causes can be removed at all, even if the plant undertakes major, long-term repairs. It is likewise unclear why an obsolete reactor needs to be put through a stressful, costly renovation. It all begs the question of whether it might be more prudent to channel all the funds involved in such a risky, expensive endeavour into preparing the plant for being taken offline altogether.

By way of background information

Reactor Block 4 of the Leningrad NPP was put into operation in February 1981; its design-basis operational lifetime is to run out in February 2011. In all, four RBMK-1000 reactors are in operation at the LNPP. Reactors 1 and 2 have already been licensed to continue operating beyond their designed life spans. That was done in circumvention of the procedures of state environmental risk evaluation.

The thermal power capacity of Reactor 4 is 3,200 megawatt; its electric power capacity is 1,000 megawatt; and its performance coefficient is 31%. The reactor is a cylinder-shaped graphite stack 11.8 metres in diameter and 7 metres high. Around 1,700 vertical fuel assembly channels run through the stack which contain fuel assemblies and through which water is pumped. The reactor does not have an outer casing, so replacing fuel assemblies is done while the reactor is running.

The main problem reactors of this type pose is the positive reactivity coefficient both in terms of temperature and the density of the coolant, which, in this case, is steam. This drawback cannot be removed through renovations alone, which only strengthens the argument that the likelihood of a Chernobyl-scale catastrophe near St. Petersburg is quite tangible.