Russia appoints new atomic oversight chief – will he stand up for Russia’s interests or bend with the Kremlin’s wind?

ST. PETERSBURG – Russian Prime Minister Vladimir Putin has appointed Nikolai Kutin as the new chief of the Russian Federal Service for Ecological, Technological and Atomic Oversight (Rostekhnadzor) in what many hope will be a change in the working style of the nuclear, oil and industry supervisory body – but not many are expecting.

Published on September 27, 2008 by Andrey Ozharovsky

In what is becoming a new emblem of arbitrary Russian secrecy, the decree appointing Kutin to the post was signed on September 20th, but not made public in the media or on government websites until five days later – a new policy many believe to be calculated to avert outcry or criticism.

Born in Leningrad in 1965, Kutin is holds a doctorate in technical science. He has worked in the St. Petersburg city administration as the deputy chairman of the city property committee, as well as the deputy director of the Russian Munitions Agency. Since 2005, he has been Rostekhnadzor’s deputy director, Konstantin Pulikovsky, who resigned the post at his own request.

Pulikovsky presided over some of Rostekhnadzor’s most notoriously disputed state environmental impact studies for nuclear power stations, oil and gas pipelines and other dangerous installations.

Pulikovsky’s resignation draws an era of embarrassment to a close 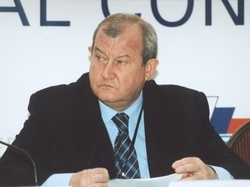 Other dubious items in Pulikovsky’s resume include granting engineered life span extensions to some of the oldest and most dangerous reactors in Russia. Among them were reactors at the Bilibin and Novovornezh nuclear Power plants, as well as the fatally flawed Chernobyl style reactors at the Leningrad Nuclear Power Plant. And the aged first reactor unit at the Kola Nuclear Power Plant even received two life span extensions from Pulikovsky’s Rostekhnadzor.

Whether embarrassment continues remains to be seen

This last provoked outrage among Murmansk area environmentalists, and the Nature and Youth environmental organisation conducted a protest last spring in which they hung a banner from the entrance of the Rotekhnadzor building in Moscow. Pulikovsky had no reaction to the vociferous protest.

It would be hoped that the new management of Russian Federal Service for Ecological, Technological and Atomic Oversight will show themselves to fit their job descriptions as protectors of the interests of Russian citizens rather than the pliable puppets of Russia’s nuclear and oil industries.

Andrei Ozharovsky, a nuclear physicist with the environmental group Ecodefence, is a frequent contributor to Bellona Web.