ST. PETERSBURG – Bellona has filed a petition in court against the Smolnenskoye Municipalityfor its refusal to grant the environmental agency the right to register a public environmental impact study of the second Leningrad nuclear power plant, which has received the green light from the government.

The Smolnenksoye Municipality oversees the town of Sosnovy Bor – 50 kilometres to the west of St. Petersburg’s 5 million residents – where the original and controversial Leningrad Nuclear Power Plant is located.

It will now apparently be home to Leningrad Nuclear Power Plant 2, and the local government is fighting environmentalists, who are asserting their rights to review plant construction plans and conduct a more rigorous independent environmental review than the rubber stamp the blue prints have already received from Moscow.

Thursday, activists from Bellona and the Sosnovy Bor-based Green World took to the streets on Malaya Sadovaya in central St. Petersburg to protest the construction of the Leningrad Nuclear Power Plant 2

“We are critical of the construction of the Leningrad Power Plant 2 near St. Petersburg and are disappointed with the refusal (by local authorities) to register an public environmental impact study,” said Rashid Alimov, editor of Bellona Web’s Russian pages.

On May 27th, Bellona was refused the opportunity to conduct a public environmental impact study of the licensing materials for the construction of the Leningrad Nuclear Power Plant 2. This refusal was the reason for yesterday’s protests.. 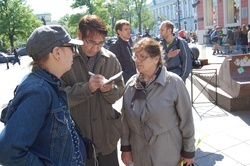 Before the protest even began, Bellona was informed by residents of Sosnovy Bor that construction on the plant had begun, but there still has been no public hearing on the project, as so required by Russian law.

At the protest, environmentalists unfurled the Bellona flag and put up a model of the Leningrad Nuclear Power Plant 2 with text showing specific items of public interest:

During the protest, Bellona activists and those who joined in to help them collected signatures against the building of new nuclear power plants. All who wished signed postcards to Russian President Dmitry Medvedev. Activists also passed out informational fliers and Bellona produced brochures entitled “Energy of the Future” about safe, cheap and readily available alternatives to nuclear energy.