MOSCOW – Three activists were arrested Tuesday during a demonstration outside the offices of RosTekhNadznator – the government body that oversees the nuclear industry – while they protested Russia’s policy of extending the engineered life span of the country’s aged nuclear reactors.

Published on April 16, 2008 by Vladimir Slivyak, translated by Charles Digges 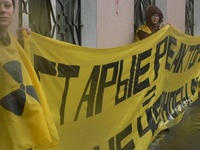 The detentions are part of a growing trend in which nearly every environmental protest for the past seven months has been dispersed by police and resulted in arrests.

The prefecture of Moscow’s central region had initially declined permission for the protests. But when the prefecture was asked a second time by organisers, they agreed pursuant to one condition – that the protest be limited to only three activists. 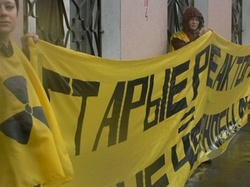 A detachment of police arrived on the scene within 10 minutes and detained three of the activists. At current, one of them has been released and two remain in custody at the Basmannoe District Police Station in central Moscow.

“We are for the quickest shutdown of old nuclear reactors that have already exhausted their 30 year resources. There is not a single developed country on earth where such reactors would receive permission to operate at all,” said Ecodefence in statement.

“The further use of these energy blocks is extremely dangerous and threatens a repeat of Chernobyl.”

Ecologists confirm that permissions to extend the engineered life span of reactors at the Kola, Kursk, Novovoronezh, Leningrad and Biblin nuclear power plants have already gone through.

By demand of the European Commission, Bulgaria, Lithuania, Ukraine, the Czech Republic and Slovakia, these old Soviet era reactors have been or are being taken out of service. However Russian authorities and the nuclear industry have not for the past 22 years realized all the dangers of the technology that led to the worst technical disaster in the history of the world.