Former Russian Atomic Minister Adamov to be sentenced for fraud Feb. 19 – will justice be served?

MOSCOW – A Moscow court has completed hearings in the case against scandal-tarred former Russian Atomic Energy Minister Yevgeny Adamov, and a sentence on charges that he defrauded the Russian government of some $9 million in US nuclear aid money and abused his position is expected on February 19th .

Published on February 11, 2008 by Victoria Kopeikina, translated by Charles Digges

Photo: A. Samarina for NuclearNo.ru

But already, environmentalists are doubting justice will be served on the well-connected former minister whose career, the accounts of numerous parliamentarians, was characterised by scandal and corruption.

The corruption case against Adamov has been running for seven years, and began in the United States where the Federal Bureau of Investigation probed the disappearance in the early 1990s of $9 million earmarked by the US Department of Energy (DOE). The money was to go for safety system upgrades on vulnerable and aged reactors, as well as training for Russian scientists to conduct research in realising this goal. Adamov, who also directed the Russian nuclear engineering institute NIKIET, was charged with graft by US authorities.

In May 2005, Adamov was detained in Switzerland at the request of US authorities to face extradition to the United States. Russia quickly countered by charging Adamov and demanding his extradition back to Moscow. Kremlin fears were high that Adamov would be tortured by US authorities to reveal Russian nuclear secrets. The Swiss court grated the extradition request to Russia and Adamov was sent home to face charges there.

The Russian case
Russia’s prosecutor general has accused Adamov of violating three articles of the Russian criminal code, namely article 159, which deals with large scale organised fraud, article 285 for abuse of power, and article 286 for exceeding the mandate of his post, causing grievous results.

According to the Russian charges, Adamov and his subordinates Revmir Fraishtut, general director of the Russian nuclear fuel giant Teksnabexport, or Tenex, and Vyacheslav Pismenny, head of the Troitsky Institute of Innovative and Thermonuclear Research State Unitary Enterprise, transferred 62 percent of the stock in the Russian-American Global Nuclear Services and Supply (GNSS) uranium joint venture to a company founded in the US by Pismenny. As a result, according to the investigation, the Russian government, which owns controlling stock in Tenex, which in turn owned the controlling stake in GNSS, lost $31 million in dividends. Adamov and his colleagues were charged with embezzling government money.

In court in Russia, Adamov immediately declared his innocence, according to the Russia daily Kommersant. He said that: “The actions of bureaucrats at the Ministry (of Atomic Energy) were not only not premeditatedly unprofitable for Russia, but saved the country between $1 billion and $5 billion when taking into account the price rise in natural uranium on the world market in recent years.”

In Adamov’s opinion, “no evidence of criminal ties allegedly existing between the defendants have been established by the investigation,” and “the assertion about the existence of an organised crime group is contrived and unfounded.”

In January, state prosecutors pushed for a nine-year jail sentence for Adamov.

His lawyers insist Adamov and his colleagues are innocent.

“In the practice of law, the hardest thing to do is to defend the innocent. This case, your honour, is artificially fabricated, and doesn’t contain even the slightest proof,” said Adamov’s attorney Genry Reznik in court. According to Gazeta.ru, Reznik said charges had been brought against “the certainly innocent” Adamov purely to secure his extradition from Switzerland.

The American case
While the Adamov case was underway in a Moscow court, a Pittsburg federal district court was hearing another case related to the one taking place in Russia relative to the extradition request filed by the Americans for Adamov in Switzerland.

In June 2007, law enforcement officials in the United States released their conclusions on their own investigation – $9 million that had been earmarked for Russia by the Americans had been embezzled via a US-based firm run by an associate of Adamov’s from Westinghouse named Mark Kaushansky. The Pennsylvania Western District Court sentenced Kaushansky to 15 months in prison and a $20,000 fine, as well as ordering him to pay a bill for $63,000 in tax arrears.

The American media has reported that Kaushansky received the relatively light sentence because he confessed his guilt and cooperated with investigators.

“We did much good. But I also did some things I am not proud of and I have to live with that to the end of my days,” Kaushansky told the Pittsburg Tribune Review newspaper. He provided evidence that Adamov transferred money “with the aim keeping it from being devoured by the haywire Russian economic system and Russia criminals after the dissolution of the Soviet Union.” According to Kaushansky, Adamov “cared more about NIKIET than he did about his family.”

The Western District Federal Prosecutor in Pittsburg announced that the case against Adamov has not been closed and that all charges against him still stand. US federal prosecutors are convinced that Adamov and Kaushansky laundered $15 million through a host of banks, including banks in Pittsburg. A minimum of $9 million dollars of this sum were legitimised by specially founded American companies, and $5.5 million are accounted for as unpaid taxes.

Adamov and corruption – twins separated at birth?
Ecologists have little faith in Russia’s court system to resolve the Adamov case in a just manner. “If he is found guilty, then I will be very surprised and some small hope will appear that something has begun to change in our country,” said Greenpeace Energy Project Coordinator Vladimir Chuprov.

“I don’t think the investigation was carried out adequately and that Adamov will be subjected to adequate punishment. I am sure that they didn’t turn him over to American authorities and instead trumped up a case in Russia in order that he not be subjected to more severe punishment,” said Vladimir Slivyak, co-chairman of the Ecodefence environmental group.

“The rampant spread of corruption under Adamov was unbelievable. Usually, some attempt is made within Russian bureaucracy to hide corruption, but Adamov did everything in the open. However, nobody paid any attention to it so long as the Americans didn’t bring him to account – in Russia, it simply didn’t interest anyone.” 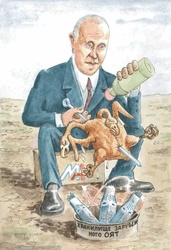 Photo: A. Samarina for NuclearNo.ru

Clear confirmation of these comments is illustrated by facts that Greenpeace first made known in 2001. The Duma’s Anti-Corruption Commission performed an audit of Adamov, and presented the results in a February 2001 hearing.

The conclusions were not pretty for Adamov. Lawmakers found that “facts contained in letters and appeals of deputies of the State Duma to the leadership of the country and in publications in the mass media purporting that Adamov during his tenure as the director of NIKIET and the Minister of Atomic Energy engaged in commercial activities have been confirmed.”

A briefing attached to the commission report read in part that Adamov, while director of Ministry of Atomic Energy’s NIKIET Institute, “had (since November 1986) with the help of his subordinates founded various commercial organisations at (NIKIET) and abroad, and to the present time is actively engaged in various entrepreneurial activities,” which was in contravention of his Adamov’s contract as NIKIET director The material included in the commission’s briefing are names of firms, various transferred sums and other curious data.

“Adamov not only established a precedent for combining the functions of state organs managing the use of atomic energy and state organs for the regulation of the safety of atomic energy and exceeded the bounds of legislation, but also openly demonstrated aspirations toward monopoly management of the government enterprise for his own personal gain,” the Duma Commission concluded.

Alexander Rumyantsev was named the new minister of atomic energy by President Vladimir Putin on March 28th 2001, a month after the commission issued its report. No accusations were leveled against Adamov in Russia – quite the opposite, he was given an honorary post as advisor to the prime minister of Russia.

Chronology of the Russian case
On May 2nd 2005 authorities in Switzerland arrested Adamov during a visit to his daughter at the request of US authorities. He was charged with embezzling $9 million in US aid money earmarked for Russian research in nuclear safety.

On May 13th, the Prosecutor General of Russia hastily issued charges against Adamov for fraud and exceeding his authority.

Then, on May 18th, the Russian Ministry of Foreign Affairs told Swiss authorities that “it would be unacceptable to transfer Adamov to the United States,” and on the next day, they told Swiss authorities that they would be issuing an extradition request of their own. It took the Swiss Court of Justice eight months to issue a ruing on which extradition request – the Russian or the America – they would honor.

At the end of December 2005, the Swiss inclined toward the Russian request and Adamov was transferred to the notorious Matorskaya Tishina prison in Moscow.

On January 30th 2006 the Prosecutor General conjoined the Adamov case and the case it was building against the Troitsky Institute’s director, Pismenny. Adamov was freed from prison six months later in June on the written condition that he not leave Moscow.

Moscow’s Zamoskovorestsky Court began hearings on the Adamov case in January 2007. Keeping Adamov company on the defendant’s bench was Pismenny and former Tenex Director Fraishtut. They are accused of fraud, and Fraishtut has additionally been indicted for abuse of authority. The case took a brief hiatus before resuming again on April 16th after one of the judges was replaced.

On January 22nd 2008, the discovery process of the trial against Adamov was completed. Two days later, the court recessed for deliberations and on January 28 announced the court would reconvene for sentencing on February 19th.

Adamov unlucky in law
Adamov is a veteran of other court cases with ecologists. In recent years he was named as the defendant in at least two libel suits. In 2000, Adamov lost one such suit to Alexander Nikitin, director of Bellona St. Petersburg. The court found that Adamov, who was still the sitting Minister of Atomic Energy, was guilty of slander against Nikitin for publicly calling him a spy, and ordered Adamov to pay moral damages of 10,000 roubles ($333 by 2000 exchange rates). All Russian newspapers, publications and broadcasters that had carried Adamov’s quote were further ordered to issue retractions.

The quote that landed Adamov in hot water and in the withdrawal line at his bank was: “With all authority, I can declare that more than half – 70 percent – of the information gathered by Nikitin for Bellona has absolutely nothing to do with ecology.” Adamov made the comment during a May 8th 1998 interview with Ekho Moskvy radio. He continued in the interview to say: “The (questions touched upon in the Bellona report to which Nikitin contributed) are normal, professional, intelligence-gathering related questions.”

In May 2002, the Lyuberetsky City Court in the Moscow Region obligated Adamov to pay 50,000 roubles ($1,666 in 2002 rates), to another ecologist, Alexei Yablokov of the Russian Academy of Sciences and one of Russia’s most well known environmental nuclear policy critics, for moral damages and insults to his dignity.

Yablokov brought suit against Adamov for comments he made on Russia’s NTV national television network’s “Voice of the People” programme in March 2001 in an episode dealing with the problem of importing spent nuclear fuel to Russia.

While answering a question from the audience on whether the reprocessing of spent nuclear fuel was safe considering that children were being born with birth defects in the Chelyabinsk region where the Mayak Chemical Combine, Russia’s reprocessing plant, is located, Adamov responded: “I would not want to deprive anyone of any government benefits, even if people become invalids for reasons other than radiation poisoning, or as a result of the declarations made by Mr. Yablokov when he is misinforming the public.”

Apparently, Adamov doesn’t have much luck when it comes to court. What fate awaits him in Russia’s unpredictable court systems is complicated to predict.