ST. PETERSBURG – Speaking at a press briefing at the Eighth International Conference on Nuclear Safety, which opened in St. Petersburg on Monday, officials of the Russian Federal Agency for Atomic Power (Rosatom) pledged they would give ecologists access to radiation control at nuclear power plants.

Published on June 1, 2007 by Vera Ponomareva 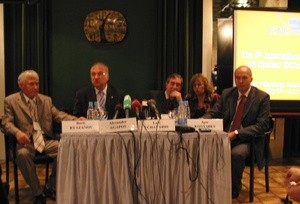 Rosatom’s Alexander Agapov was the first speaker to welcome participants to the conference. The corporate pride he expressed in his speech extended to all of his brothers-in-nukes:

“The way I see it, all who work with nuclear safety are beautiful, strong, intelligent and remarkably law-abiding people. We don’t even break traffic rules, if only maybe when speeding… but that’s so common for Russians.”

Agapov proceeded to speak of the importance of the conference for Russia, where “atomic energy has a special significance because of the country’s size.” That said, Agapov continued to say that nuclear materials transport across the vast Russian territory is minimal: “A mere four-wagon train once in a year, if not once in three years.”

Agapov concluded his opening speech by mentioning another “positive drift” – the new Federal Target Programme for Nuclear and Radiation Safety that will run until 2015, which will be funded with 131.8 bn roubles out of state coffers.

“This drift is extraordinarily positive,” said Agapov, smiling. “It creates a real basis for safety – including the sites of nuclear legacy, on which 70 percent of the funds will be spent.”

Rosatom promised ecologists will be allowed on nuclear power plant sites
“We are willing to carry out joint evaluation studies on the territory of Rosatom’s open-access sites that do not relate to the military industry complex,” Igor Konyshev, counsellor to Rosatom’s head Sergei Kiriyenko, told the audience.

A week ago, panic swept over the southern areas of Russia as rumours spread that a nuclear accident had taken place at the Volgodonsk Nuclear Power Plant near the major city of Rostov. The population remained disquieted despite official assurances broadcast by representatives of Rosatom and the Ministry of Emergency Situations that the radiation background was within acceptable limits. Area residents still call environmental organisations, hoping to find out what had happened at the site and whether there is any danger to be aware of.

In their turn, environmentalists have been talking about the necessity of establishing independent radiation control at Rosatom sites since two years ago, when a similar scare mushroomed around the Balakovo Nuclear Power Plant, on the Volga River.

However, as quickly as he expressed readiness to team up with independent ecologists for radiation safety surveys, Konyshev followed by doubting that such an innovation could be effective at all: “In situations like this, one is inclined to believe the worst. Whoever we bring [to the site for an evaluation] – people are not going to believe us.”

Last year, Konyshev invited environmentalists on a visit to the closed town of Lesnoy in the Sverdlovsk Region in the Russian Ural Mountains, where in early July a fire had taken place at a uranium-238 store house at the Elektrokhimpribor uranium enrichment facility. The invitation was extended on Rosatom’s own initiative. However, environmentalists were prohibited from collecting samples or taking them out of the town, nor were they allowed access to the production areas of the enterprise.

Moreover, ecologists were denied any information on the accident. Elektrokhimpribor officials explained that Vladimir Slivyak, co-chairman of the Ecodefense! environmental Group, failed to have his organisation’s charter on him, while Bellona correspondent Rashid Alimov’s accreditation turned out to be invalid at the site because he was not registered as a Lesnoy resident. 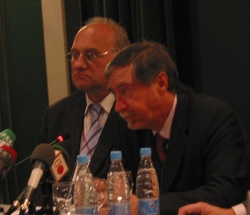 evaluations can be abolished because they make a very important part of the process of construction of nuclear power plants, as does participation of the public,” Echavarri said when asked by Bellona Web about this problem.

He added that in European countries, absent an ecological impact study, no contractor will start work on even a residential building, not to mention an atomic power plant. Agapov hurried to assure Echavarri that environmental risk evaluations had not been dispensed with in Russia.

In point of fact, state ecological impact studies were abolished in Russia as of January 1st, 2007, when legislators in Moscow introduced amendments to the Municipal Building Code of the Russian Federation. These amendments replaced the comprehensive procedure providing for an ecological risk assessment of any construction project with the “evaluation of project documentation.” All the latter does is verify project paperwork against the existing technical regulations. As for the regulations developed for the moment, none of them currently include any environmental standards.

Environmental organisations have protested these amendments since they surfaces and voiced their concerns over the implied dangers of such changes. The amended legislation was passed nevertheless.

Bellona is currently circulating a resolution urging people to endorse the demand to re-instate the practice of environmental impact studies in Russia. With enough signatures collected, the document will be passed over to the government and the Federation Council of the Russian Federation.