Environmentalists held a visually dramatic protest near the Regional Government building of the densely populated Russian enclave of Kaliningrad last week in order to draw public attention to plans to build a nuclear power plant (NPP) there.

Published on February 19, 2007 by Galina Raguzina

The environmentalists, led by the anti-nuclear group Ecodefence! insisted last week that the Federal Atomic Energy Agency (Rosatom’s) notion of using the Kaliningrad Region – which is separated from mainland Russia by Latvia, Belarus and Lithuania – as “a site for the development of the nuclear-energy sector” will benefit only Russia’s nuclear utility, Rosenergoatom. The only thing that local citizens will get, said the activists, is a threat to their lives and health, and the well being of their society and environment.

During the protest, a “working” model of the power-generating unit of a nuclear power plant was placed next to the regional government building. The model, which was more than 4.5 meters long and 2.5 meters high, was equipped with a pipe emitting pungent, orange smoke. The side of the giant model was inscribed with an address – Moscow, White House – in reference to the building housing President Vladimir Putin’s administration.

A half an hour after the start of the protest, the mock-up of the “Kaliningrad NPP” released its last puff of smoke, signifying the environmentalists’ hope that their model nuke plant will be the first and last “nuclear” polluter in the area.

The protest was prompted by remarks made last week by the deputy head of Rosenergoatom, Aleksandr Apkaneev, who announced that “the Kaliningrad Region is being considered as a site for the development of the nuclear-energy sector, in particular, the construction of an NPP.” 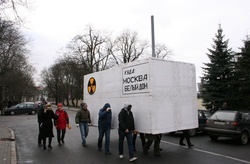 there were full guarantees of safety, then why not?”

Following the protest, participants called a cargo truck to transport their mock nuclear power plant to Moscow. Getting to the heart of the matter, the driver of the truck expressed his own opinion regarding the problem: “Do they want to have a second Chernobyl here? So we’ll later give birth to mutants?”

On the eve of the Kaliningrad protest, the local television station Kaskad conducted its own quick poll during a programme on the plans to build a Kaliningrad NPP. The results showed that, of the 800 viewers who had a chance to respond, 456 said they were not in favor of the plans. At first glance, this is not much of an opposition – less than 60 percent. It is important to remember, however, that until now, Rosatom has been developing its plans for Kaliningrad in an atmosphere of secrecy and has not announced them to the public.

Even for Oksana Aryutova, a correspondent from the Kaliningrad newspaper “Kaskad,” who last month asked representatives of Rosenergoatom in about the possibility of building a nuclear power plant in the Kaliningrad Region, “their affirmative response was like thunder in a clear sky.” According to Aryutova, she had previously “regarded such a possibility … as science fiction.”

In addition, it should not be forgotten that the residents of the region are always being fed a bitter pill about the region’s energy deficit and energy dependence, and it is recommended that they swallow this with a sweet syrup of confirmations about the safety and low cost of nuclear energy. Moreover, these confirmations are based mainly on proof by contradiction: mineral resources are also environmentally unfriendly, and wind power and hydroelectricity are incapable of being used on an industrial scale.

“When we spent four hours on the street, building this model NPP, passersby would say: ‘What? A nuclear power plant in Kaliningrad? It’s great that you’re speaking out against this! How can we join you and oppose this ourselves?’” Ecodefense’s Koroleva said.

“In the middle of February, we are planning to commission a public survey on this topic, so that our opinion is not, on the one hand, the opinion of a small group of people, and, on the other hand, so that it doesn’t turn out that we are speaking in the name of the region’s residents without their support,” she continued. “We are also interested in the results, although we’re sure that the result will be just as I’m suggesting.”