On December 9-12, four towns in Murmansk Oblast – Apatity, Olenegorsk, Monchegorsk and Kandalaksha – held public hearings into the possibility of building a second-stage construction at the Kola Nuclear Power Plant (KNPP-2).

Published on December 18, 2006 by Vera Ponomareva, translated by Peter Morley 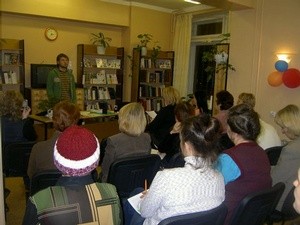 The hearings were held on the initiative of Murmansk environmental group Nature and Youth and the Ecodefense! group. The organizations wanted to diagnose public opinion regarding the idea to build KNPP-2 and develop the energy sector on the Kola Peninsula as a whole.

Today the environmentalists published the results – 89 percent of people opposed the idea of constructing KNPP-2, and 93 percent were in favour of developing wind energy.

“The results of the hearings show that residents of Murmansk Oblast are against the dangerous project of building a new NPP,” said Vitaly Servetnik, chairman of Nature and Youth. “People see a real alternative – large-scale use of wind energy, which our region is very rich in. According to a VTsIOM survey carried out in October, in the country as a whole only 19 percent of people supported nuclear energy. Understandably this figure is lower in Murmansk Oblast – people are frightened of living next to the old and dangerous Kola NPP.”

The proposal to build KNPP-2 was put forward during a visit by Rosatom boss Sergei Kirienko to Murmansk Oblast on October 6. The aim of the new construction was stated as providing electricity to aluminium producers from the Sual group. Since building a new NPP could have a substantial effect on the environment and the health of Kola Peninsula residents, the decision on going ahead with the project should be made with due account of popular opinion, environmentalists say. “We think that the question of building a potentially dangerous new NPP should be taken at an Oblast referendum,” Servetnik said.

The same position was expressed by Kirienko, who said during his visit to Murmansk Oblast that his department “will not build facilities in regions where nuclear energy is supported by less than 50 percent of the population.”

Even so, the organizers ran into hidden ill-wishers. According to Servetnik, on the way to Kandalaksha he received calls from “interested parties” who demanded that the hearings be cancelled and labelled them “extremism.” Similar calls were received by employers of local libraries where the hearings were held. Nevertheless, the hearings were not cancelled.

Environmentalists promise that information on the results of the hearings will be sent to Yury Yevdokimov, governor of Murmansk Oblast, as well as Kirienko and Viktor Vekselberg, the head of Sual.

Nuclear energy – tons of radioactive waste
Representatives of scientific and environmental organizations spoke at the hearings. All available information on the KNPP-2 project was presented, along with analysis of the economic, social and environmental consequences of going ahead with it.

“Before building the nuclear plant, a site must be chosen for storage, as well as for reprocessing waste in the oblast, and then people will understand that nuclear energy is not only lights in the window, but also large environmental problems,” said Svetlana Tuinova from Apatity environmental organization Geya.

“I would have suggested holding similar hearings in the Chelyabinsk Oblast village of Muslyumovo, where people are suffering from the consequences of reprocessing waste from Russian nuclear plants,” said Andrei Ozharovsky of Ecodefense!

Developing wind energy
As well as construction of KNPP-2, the hearings considered the broader topic of the oblast’s energy policy. 93 percent of those presents said developing wind energy should be a priority for Murmansk Oblast – since Kola Peninsula has unique resources in this area.

This opinion recently found support from governor Yevdokimov, who last week signed a declaration on developing wind energy in the oblast and promised NGOs support and cooperation on the issue. The governor adopted a resolution on creating a special working group including representatives of his administration, NGOs and municipalities, as well as scientists.

“I am grateful to you for understanding that without developing new electricity capacity in our oblast, we will run into a blind alley,” he said, supporting environmentalists demands to start mass construction of wind turbines. “Oblast administration experts will work with you and discuss these problems as much as is necessary.”