Public hearings on a second nuclear plant in St. Petersburg to be held in January

St. Petersburg will hold public hearings on the construction of a second satellite nuclear power plant (NPP) already in January next year. The decision to build the new site near the city is as good as set in stone, despite concerns that no specific plans are in place to decommission the existing Leningrad NPP.

Published on November 29, 2006 by Vera Ponomareva 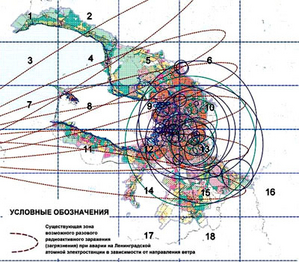 Plans to hold public hearings on the construction of the second Leningrad NPP, or LNPP-2, in January 2007 were announced at a meeting of the St. Petersburg Legislative Assembly’s Commission for the Environmental Protection of the Population by assembly member Oleg Koryakin.

Though work is yet to be finished on the LNPP-2 project design, a principal decision to build new reactor blocks has been taken and endorsed by the Russian government.

According to the so-called Federal Target Programme approved in October 2006, LNPP-2’s first reactor block will come into operation in 2013, followed by a second reactor in 2014. Wider plans are in the cards to replace Russia’s aging nuclear power facilities by building two new reactor blocks annually beginning in 2012.

Such projections, seen by some as unduly grandiose, were stated as early as last May by the Federal Agency for Atomic Power (Rosatom) head Sergei Kiriyenko.

Koryakin, himself a former atomic specialist who worked in the Alexandrov Scientific and Research Technical Institute located a few kilometres away from Sosnovy Bor, the nuclear town housing the LNPP, expressed bewilderment when asked to comment on these plans by Bellona.Ru.

“They have no doubt shown quite some braggadocio in approving this resolution – I have no idea how they are going to do all that,” said Koryakin.

But not all grand statements made last spring have found their way into more substantial administrative or project paperwork. For instance, VVER-1500 reactors, which Russian atomic scientists have promised to provide for the new NPPs, have been replaced in the federal programme by less powerful VVER-1100s – but these, too, still await their development.

The only solid information available on the government’s bold initiative is that the “principal feature” of the new reactors will be a longer design service life – 60 years, said Sergei Stepanov, a Leningrad NPP representative, at the meeting of the environmental protection commission.

Meanwhile, costs of building one new reactor block have taken a hike since last spring, rising from $1.5bn to $2.5bn. During his visit to the LNPP in May 2006, Rosatom head Kiriyenko was still making estimates of $6bn when assessing overall expenses of the construction of four new reactor blocks.

Will old reactors continue their exhausting marathon?
The LNPP currently operates four reactor blocks running Chernobyl-type RBMK reactors with a capacity of 1,000 megawatt each. The first and second reactors have long reached the end of their engineered life-spans, but instead of being taken out of operation, each of the reactors has been assigned another 15 years of service.

The operational terms were extended in violation of the law, say environmentalists, citing the lack of a state ecological evaluation to back the decision. Nevertheless, the LNPP’s third and fourth reactors are now expected to continue their run beyond the finish line.

But even with the extended operational limits taken into consideration, all of Russia’s worn-out reactors are scheduled to be taken offline no earlier than between 2018 and 2025.

At the same time, as atomic specialists themselves admit, they have yet to see any specific goals set for the decommissioning of the old facilities.

“The Federal Target Programme says nothing about it. The programme only stipulates the time-frame [for the introduction of new reactor blocks] – 2013,” said Nikolai Afanasiev, deputy head of the North-European Interregional Territorial District for Nuclear and Radioactive Safety Control. “As for what condition the old blocks will be in – I think they’ll be operational.”

According to LNPP representative Stepanov, decommissioning plans for the aging reactors will not come into development earlier than five years from now.

“Taking [a reactor] out of operation is a very difficult issue for all countries. We are talking about equipment that can’t just be thrown away, that can’t be done anything about,” explained assembly member Koryakin. “So far, we have no examples of taking a reactor block offline anywhere in the world.”

But environmentalists argue that a lack of experience in ceasing the operation of a nuclear plant is hardly an excuse to put the issue on the back burner. On the contrary, they say, a decommissioning plan must be developed before the first brick is laid – or dropped – at a new reactor construction site.

“Before expanding the existing [Leningrad] nuclear power plant, authorities must provide the funds for, and start preliminary works on, taking offline the first two RBMK-type reactors, the ones built in 1973 and 1975,” said Igor Kudrik, a researcher with the international environmental organisation Bellona. “Russia so far has no solution for the problem of handling [spent] fuel from RBMK reactors, meaning that one was supposed to think about how to decommission these reactors as soon as yesterday, much less by 2014 or 2018, when these reactors will stop running.”

Energy output straight to Finland
In March 2006, senior management of the St. Petersburg-based Baltenergo, a daughter company of the fuel and energy producer, state-run Rosenergoatom, negotiated a contract to start exporting electric power from the LNPP via a cable route to be laid across the floor of the Baltic Sea.

Under the contract, the LNPP will supply Scandinavian countries with around 8bn kilowatt-hours a year, an equivalent of a year’s worth of energy output from one of the plant’s four reactors. The deal seems logical enough: After the introduction of the new reactor blocks, Russia’s northwest will have a significant amount of surplus energy, given that the old facilities will continue operation. The time-frames set for the construction of new reactors and for taking out old ones overlap, and between 2014 and 2018, LNPP will be running altogether six reactors – four old and two new ones.

But, says Kudrik, the LNPP is in any case unlikely to be able to export electricity after plugging into the European grid, as the plant’s aging reactors lag behind international standards.

Last week, environmentalists from Russia and Norway published an appeal to the governments of Russia, Finland and Sweden, making a stand against export sale of nuclear-generated electric power to Scandinavian nations. The statement claims that such plans will contribute to further extensions on the service terms of LNPP reactors, which have already used up their operational resource.

It goes on to say that energy supplies to Scandinavia will result in yearly proliferation of dozens of tonnes of highly toxic nuclear waste that will begin to pile up in the LNPP’s temporary storage facilities.

The hearings
At the environmental commission’s meeting, Koryakin suggested the organisation of a public discussion of the LNPP-2 construction plans: “It’s a given that in its majority, the population is ignorant, and the appearance of [new] reactors close to the city causes them to worry.”

“The sooner we start talking about it, the better: One the one hand, we will be calming down the population, on the other, demonstrating to the project owner and to the contractor that we have a financial stability and public control,” he said.

Stepanov assured those present at the meeting that the January 2007 hearings will be completely open and will involve the participation of Rosatom specialists and representatives from environmental organisations.

“We had similar public hearings at the LNPP in April – on the treatment of radioactive waste and spent nuclear fuel,” he said. “So we have some experience with this already.”

Stepanov added that the public debate is likely to spark an interest among Russia’s neighbours, and if they so wish they will be welcome to take part in the hearings and even co-operate in evaluating any potential environmental damage the project might infer.

As guaranteed by one of the articles of the 1991 Convention on Environmental Impact Assessment in a Transboundary Context, or the “Espoo Convention,” called so because it was signed in the Finnish town of Espoo, all states that may in one way or another be subject to environmental impact from the construction of a nuclear power plant have the right to participate in a study estimating the risks of such a project.

However, Stepanov failed to answer to which extent neighbouring countries have been made aware of the initiative or whether all necessary documentation has been translated into the languages spoken by the nations of the Baltic region.

“I think they will themselves express their wish to participate in discussing the project,” he said.