Russia’s president Vladimir Putin calls for an increased role of nuclear power in country’s energy supply while US and Russian NGOs demand to stop subsidies for new nuclear plants and invest in alternative energy.

Published on June 9, 2006 by Vera Ponomareva 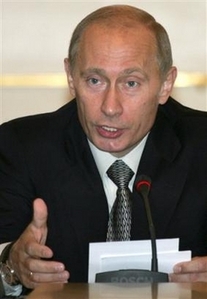 "The share of nuclear power in the country’s energy balance is 16%, and if the condition of the sector remains in the shape we know it is in, then in several years that share could fall by 2030 to 1-2%,” Putin said. He also mentioned the "strong potential in nuclear power" that was acquired by Russia in Soviet times.

Earlier this year Putin tasked his government to draft a program to bring the share of nuclear power in overall electricity production up to 25%.

In response to the president’s speech Sergei Kiriyenko, a former prime minister and now head of the Federal Nuclear Agency (Rosatom), told the meeting that two more power units a year would be built from 2007 and another four or five would follow in both 2009 and 2010.

In May, during his trip to the United States, Kiriyenko called for 40 new reactor units to be built. Currently Russia has 35 units at 10 nuclear power plants.

Public against nuclear power
Ahead of the G8 summit, several NGO conferences are held in Russia on the issue of energy safety and sustainable development. In March, civil G8 gave it’s recommendations to change the priorities in global energy policy towards energy saving and efficient use of new and renewable sources of fuel and power.

On June 1-2, representatives of 31 from Russia, US, Finland and Norway discussed these issues at the international conference on the “Impact of the Public and Whistleblowers on Energy and Nuclear Policy”.

"The public is very much concerned with the new initiatives of such countries as Russia, US an Great Britain to develop nuclear industry," said Alexander Nikitin, the chairman of Bellona-St.Petersburg, at the press-conference on Monday.

“We believe that so called nuclear renaissance is a very bad thing for both US and for the world,” claimed Susan Gordon, head of US Alliance for Nuclear Accountability.

Jay Coglan, head of Nuclear Watch, New Mexico, said that the governments have their own interests investing in nuclear power. “I think it has much to do with corporate structure. They are big corporations that want to make a profit. My opinion is that energy supply should be regionally based. If we put the same effort to renewable energy that we put in nuclear energy we would not need nuclear energy and we would not have nuclear waste.”

Another Leningrad NPP
The first units to be built in 2007 will replace the old reactors of Leningrad nuclear plant (LNPP), 80 kilometers from St.-Petersburg. According to the earlier statements of Kiriyenko, four new VVER-1000 blocks will be constructed as the existing Chernobyl design RBMK-1000 reactors at the LNPP are shut down.

During his visit to LNPP in may, Kiriyenko assured that the designing and building of the new nuclear station would take place in accordance with the respective laws governing ecological impact studies. He promised a state ecological impact study of the project, as well as public hearings.

“If society is against it than we will not build anything,” said Kiriyenko.

Yet Kiriyenko said that only residents of the Leningrad Region could take part in the public discussions of the project, as the new plant is of regional significance only.

It is obvious, that in the case of an accident at the plant, the fallout would spread far further than the borders of the Leningrad region and even Russia itself. Therefore, view the new plant as an installation of regional significance is impermissible.

“This project performs environmental risks not only for the Leningrad region but for all Baltic countries as well,” claimed Oleg Bogrov, the chairman of “Green world” NGO from Sosnovy Bor, at the press-conference on Monday.

“The public had no chance to influence these projects and demand their security,” Bodrov said.