While the black limo with Russia’s President Vladimir Putin in the back seat drove up to the entrance of the Royal Palace, 250 candles forming a radiation sign lighted the dark Oslo-evening.

Published on November 12, 2002 by Thomas Nilsen

The anti-nuclear demonstration was the only demonstration allowed outside the Royal Palace in central Oslo where President Vladimir Putin, his 40-man delegation, the Norwegian Government and other more or less high-ranking officials had dinner with Norways King Harald V and Queen Sonja, Tuesday evening.


Some 20 persons from the environmental group Nature and Youth had lighted the radiation sign, formed by 250 candles, in front of the castle. They also held banners with slogans in both English and Russian, sending a clear message to the dinner-eating and toasting President inside the castle: Stop Kola nuclear power plant.


It’s unlikely that Putin was able to see neither the slogans nor the lights when his Mercedes passed by at great speed on its way to the Royal entrance. However, if the President were looking out of the castle windows during dinner, it would in fact be hard for him not to notice the huge shining yellow radiation sign blowing in the wind.


King Harald said in his dinner speech that nuclear safety and environmental cooperation within the Barents region is of high importance for the two countries. The King underlined that the relation between Norway and Russia has never been better than it is nowadays. 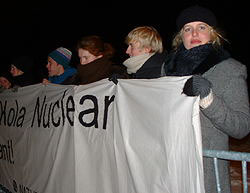 The King and his wife, Queen Sonja, do by first-hand experience know what challenges the nuclear safety work in the Russian north are facing. With the King’s own boat, the King and Queen visited Murmansk back in the late 1990s. In Murmansk, the Norwegian Royal vessel was anchored just a few hundred feet from a nuclear powered icebreaker in central Kola bay. As part of the official programme, the King was dressed up in a white protection dress before entering the Norwegian-sponsored so-called cleaning facility for liquid radioactive waste, which is situated at the nuclear powered icebreaker base Atomflot, just north of Murmansk.


Prior to the Kings visit to Murmansk, the original plan was that King Harald V was supposed to front the official opening of the facility. King Harald failed however to open the facility – in short, because it was nothing there to open.


Tonight, some five years later, the Norwegian King could have asked President Putin how things are going with the cleaning facility in Murmansk. And if he did so, Putin would have had to tell his friendly Norwegian neighbour at the castle downtown Oslo, that the Norwegian-paid facility is still not put into operation.


Rather than discussing the Norwegian Kings last visit to the nuclear installation in Murmansk, President Putin in his speech friendly pointed to the fact that Norway and Russia live under the same Polar star.

In these times, before Christmas, the Polar star lights the winter-dark Arctic areas in Norway and Russia. Historically, navigators used the Polar star to find their safe way to the north. 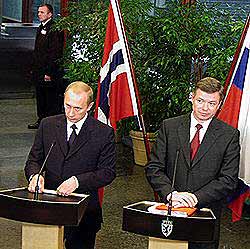 Another fascinating light in the Arctic areas is the polar light, also known as the northern light. This light, however, is not possible to navigate safely after. It blows uncontrolled.


Maybe thats the reason why environmental activists outside the Royal Palace in Oslo lighted up the evening with candles forming the radiation sign and simultaneously demanding the Kola nuclear power plant shut down: The nuclear power plant is not safe, maybe uncontrolled and its located in the city of Polyarny Zori, the Russian name for Polar light.


–We demand that the Russian authorities close down the Kola nuclear power plant, the Nature and Youth leader, Elin Lerum Boasson, said commenting on the radiation sign placed in the square in front of Putins dinner on the Royal silver plates.


The Norwegian environmental group Nature and Youth has local sub-divisions in several cities in the Russian north. They have, together with Bellona, worked actively in the area since the late 1980s. Both organizations want the Kola nuclear power plant to be shut down.


–The oldest reactor at the Kola nuclear power plant will, next summer, surpass its original lifetime of 30 years. We fear another Chernobyl, says Elin Lerum Boasson. 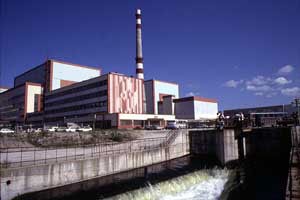 Despite fierce criticism from both Russian and Scandinavian nuclear experts, the reactor is not to be closed down. Some officials at the Kola NPP even claim that the reactor very well can go on for at least another ten years, maybe even longer.


A Bellona report from last year points out the safety problems in the design of the oldest reactors at Kola NPP. Also, the Bellona report stress the very fact that the oldest reactor can be closed down without leaving the area without electricity. The Kola Peninsula is one of the relatively few places in Russia with a great over-capacity of electricity production. In periods, as much as 40 percent of the electricity produced at the four reactors at the Kola NPP are exported out of the region, either to neighbouring Finland, to the Russian republic of Karelia or to the Leningrad Oblast.


Putin left Oslo in his presidential plane late Tuesday evening without commenting on the future of the Kola nuclear power plant.