Russia is close to creating floating nuclear power plants but could they become floating Chernobyls?

Published on November 7, 2002 by Andrey Mikhailov 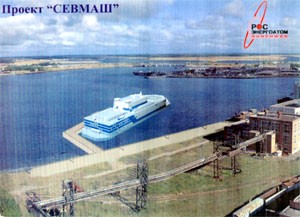 On Monday October 28th the head of the Russian Atomic Ministry, Alexander Rumyantsev, approved the technical design of the low-powered floating nuclear plant for generating heat and electricity. Earlier, Rosenergoatom president, Oleg Sarayev, and director of the Russian Shipbuilding Agency, Vladimir Pospelov, approved the project. The Ministry should start financing before the end of 2002. The first floating nuclear plant in the world will be constructed in Severodvinsk, Archangelsk region, by 2008. The Sevmash plant, which specialises in nuclear submarine building, will produce a special ship accommodating a power unit with a 70MW/h capacity. The Rosenergoatom concerm plans to build not less than two floating nuclear plants at Sevmash. The price tag for each plant is $100-$120 million.

The new power plant will serve as a test plant and will undergo various checks. The plant’s construction should take 40 months. The thermoelectric power plant, which is capable to generate heat and electricity, will be transported after completion to Kamchatka, to a “closed” town Viluchins, which is a nuclear submarine base. The floating source of electricity will make the town independent from the local grid. The construction of the floating plant is 5-6 times cheaper than an ordinary nuclear power plant. It is planned to build the floating nuclear power plants for Severodvinsk, Archangelsk region, and Pevek, Chukotka.

The design of the low-capacity floating thermoelectric power unit was developed by the companies of the Nuclear Ministry and the Rosenergoatom concern: Russian Shipbuilding Agency, Malaya Energetica company, design bureau Iceberg, Kaluga Turbine plant, Avrora and others.

But environmentalists are not happy with the civil project taking place at a Russian navy shipyard. It is probable that these experimental “civil” floating nuclear plants can damage the environment more than “disciplined” nuclear submarines with well-trained crews.