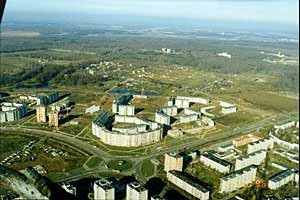 The plant in Obninsk, a small town 60 miles south of Moscow, was unveiled by the Soviet government on June 27th 1954 as the first nuclear generator of electric power. It was dubbed AM-1, AM being the Russian-language acronym for “peaceful atom.”


It was a triumph for Soviet science over the United States in the race for nuclear power during the darkest days of the Cold War. The reactor was used for military research as well as civilian power needs.


On Monday, almost 48 years after its birth, the reactor was retired amid Pomp and ceremony with nuclear scientists and Atomic Energy Ministry officials standing by. Nikolai Shingaryov, Minatom’s deputy minister for information policy told Bellona that the shutdown went smoothly.


The Obninsk plant was similar in design to the fatally flawed RBMK-1000 reactor at Chernobyl, site of the world’s worst radiation disaster in 1986. The Chernobyl plant, in the Ukraine, was finally shut down in 2000.


“(Obninsk) is not only the world’s first nuclear power station, but the first one to be taken out of service correctly,” Shingaryov told Bellona, suggesting the Obninsk shutdown would set the standard for future closures.


“It was (closed down) for purely economic reasons … it could have continued to work, but it had not been profitable for a long time and was working off government subsidies,” he said. Minatom spokesman Yury Bespalko further added that the 5-megawatt reactor no longer served any scientific or technological purpose, Itar-TASS reported.


Shingaryov said the plant would be turned into a nuclear museum.


When it first went on line, the Obninsk reactor helped Soviet scientists research the possibility of propelling submarines with nuclear power. Military research continued for years, although the plant also provided for local power needs.


The small government-funded, water-cooled reactor had not produced electricity since 1968, but was still used for experiments and to warm the town’s centrally distributed hot water supply.