RBMK fuel to be cut into pieces

The Leningrad Atomic Energy Station, or LAES, may have hit on a solution to an age-old overcrowding crisis in its nuclear waste storage pools and is forecasting that a new and supposedly safer dry storage facility could be ready for use by 2003. 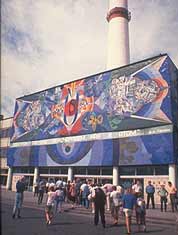 The Leningrad Atomic Energy Station, or LAES, may have hit on a solution to an age-old overcrowding crisis in its nuclear waste storage pools and is forecasting that a new and supposedly safer dry storage facility could be ready for use by 2003.

But a number of Russian environmentalists, while agreeing relocation of the waste is necessary, think the pending move to the new dry storage facility — which is still under construction — is hasty and could create ecological distress on par with or worse than what may happen if the fuel were simply left in its current state while better solutions are sought.

Environmental groups even allege that the new project, instead of increasing safety, will enrich LAES’s coffers because of the patented new process it will involve. LAES press officials denied this charge, however, and would comment no further on it.

The proposed plan, according to an official from Gosatomnadzor, or GAN, Russia’s titular nuclear regulatory body, involves removing 24,000 15 to 27-year-old spent uranium and plutonium rods that were used by RBMK-1000 reactors — the same kind of reactor model that exploded at Chernobyl in 1986 — from the waste storage pools where they are currently hanging in LAES’s dilapidated building 428 in dangerously close quarters — and where several substantial radioactive water leaks have been documented over the past several years. The rods themselves, several of which have been submerged in coolant for decades, are also severely corroded.

Fuel from the fatally flawed RBMK-1000 cannot be reprocessed and, thus presents massive storage problems once it is used.

The dry storage building would house those rods from building 428, presumably in an atmosphere of pure carbon dioxide, a speculation provided by David Cartwright, a reactor decommissioning specialist at Britain’s BNFL Magnox, in a telephone interview Friday. Though Cartwright said this was the standard method of dry storage, Nikolai Afanasniev, spokesman for the regional branch of GAN that is overseeing the transfer of the rods refused to confirm the new storage method.

The concerns environmentalists have about the waste relocation plan at LAES is twofold: Firstly, it is the tens of thousands of litres of radioactive cooling water from building 428 — a squat cement structure a mere 90 meters from the Gulf of Finland — that will have to be disposed of somewhere. Much of this water was shown as far back at 1996 to contain caesium 137, which is a highly penetrating, dangerous radioactive isotope.

Ironically, the water in 428’s pools is not supposed to be radioactive, but the fact that building is filled to double its capacity — with 24,000 spent assemblies, the water has become contaminated as the zirconium cladding surrounding the spent fuel corrode and rust.

This highlights the second concern of environmentalists regarding the transfer of the waste: These waterlogged rods will also have to be sawed into pieces to be placed in dry storage — a process one physicist from the US based Nuclear Regulatory Commission, or NRC, said in a telephone interview Friday, could be “a contamination disaster if not handled properly.”

The cutting of such substantial and corroded 10-meter long fuel assemblies is, furthermore, a first in the world of nuclear power. England and France routinely cut rods for transfer from water to dry storage at their Sellafield and Cape La Hague plants respectively. But spent fuel rod sawing at these plants is, according to Cartwright, conducted only after their meter-long rods have been submerged for a maximum of two years, at which point they are stripped of their magnox sheaths and cut in labs that have be doing the work for years. Cutting a 10-meter rod is a substantially different process.

“Our nuclear industry has never tried anything like this — the experience of the Europeans notwithstanding,” said Vladimir Slivyak of Ecodefence in a telephone interview.

“This is a typically risky experiment from our nuclear authorities — they are risking contaminating hundreds of LAES workers, as well as perhaps the town, and their attitude its that what the general public doesn’t know wont hurt them,” he said.

Despite the success of western plants in dismembering nuclear fuel, the experience doesn’t really translate because it places far more demands on the delicate RMBK-1000 rods themselves. First they are removed from their cooling pools, creating a drastic temperature change, the effect of which no one really knows.

Secondly they are stood on end while they await sawing. Preliminary experiments at the sawing of the rods, preformed by inexperienced workers, yielded several injuries that were covered up by the plant.

LAES press spokesman Sergei Averyanov said in a telephone interview Wednesday, however, that the new process was safe and denied that any workers have been hurt in preliminary tests.

“That’s just a lot of nonsense,” he said. “This is an entirely safe process and one environmentalist have been wanting for a long time. I don’t see any reason to complain.”

Averyanov was supported by Afanasiev from GAN — an organization being increasing marginalized in its decision making power by Minatom, Russia’s Nuclear Power Authorities, which will likely be the government authority that rubber-stamps the waste transfer plan.

“Obviously something needs to be done about [building] 428, but we are still at a very technical stage,” Afanasiev said in a telephone interview from his St Petersburg office. “So far things seem to be proceeding safely, though the plans are in the hands of Moscow.”

A history of building 428

Indeed, the last few years have not been kind to LAES’s building 428, and practically all environmental organisations that have contact with LAES have demanded its destruction. In 1996, the already groaning facility was forced to accept another 5,000 tonnes of radioactive fuel rod assemblies for lack of space. In a plan backed by LAES and approved by the Nuclear Power Ministry, new fuel rod hanging assemblies that doubled the load — and were even patented — the building was packed to capacity. In a recent visit from delegates of the Finnish Nuclear Regulatory Commission, 22 leaks were counted in building 428, leading to a daily water seepage in excess of 400 litres.

What environmentalists feared and still fear for building 428 is an Andreeva Bay scenario. In the disaster at Andeeva bay, on the Kola Peninsula, dozens of spent fuel assemblies that hung on hangers broke free and sank to the bottom of a cooling pool, damaging both the rods and the pool’s thin steel lining.