On Friday the International Atomic Energy Agency (IAEA) sent a cohort to the destroyed Fukushima nuclear plant, and headlines trumpeted what seemed to be the first good news emerging from the smoldering wreck since the crisis began: praise for the decommissioning efforts.

Published on December 9, 2013 by Charles Digges 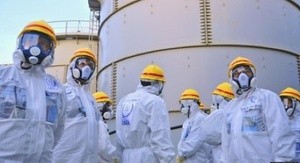 On Friday the International Atomic Energy Agency (IAEA) sent a cohort to the destroyed Fukushima nuclear plant, and headlines trumpeted what seemed to be the first good news emerging from the smoldering wreck since the crisis began: praise for the decommissioning efforts.

But everyone missed the big question: When it comes to issues of nuclear safety, who cares what the IAEA has to say?

It’s about as disingenuous as hearing Smith & Wesson argue that gun manufacturing is inherently safe because none of the assault weapons used in (insert the last American school-yard massacre or shopping mall shoot-out) jammed or misfired.

On the contrary, the IAEA has a vested PR interest in standing behind the mistakes, lies, venality, and incompetence ground out by Fukushima’s operator, the Tokyo Electric Power Co (Tepco), something that plays well with the passage of Japan’s new official secrecy laws.

The IAEA’s praise that “Japan has achieved good progress in improving its strategy and in allocating necessary resources to conduct a safe decommissioning of the Fukushima nuclear power station” did come with some predictable caveats that the situation remains “complex” and that there are “very challenging issues that must be solved for the plant’s long-term stability,” as Juan Carlos Lentijo, leader of the IAEA team, was quoted as saying by the BBC and everyone else.

But the issue remains that the IAEA is, despite popular opinion, and by its own adminssion, one of the least qualified organizations in the world to ensure nuclear power plant safety, and, thus, to draw any conclusions about the progress that Tepco is making toward safely decommissioning Fukushima.

The perception of the IAEA, and its affiliations with the United Nations, is that of the world’s nuclear regulator, the biggest stick on the block, created with the intention of keeping errant nuclear power operators in line.

The IAEA is not here for your safety

IAEA Director General and Japanese national Yukiya Amano – in the direct aftermath of the triple meltdown at Fukushima, occasioned by March 11, 2011’s 11-meter tsunami and 9.0 magnitude earthquake  – immediately laid that perception to rest.

“Since the accident, I have tried to address some widespread misconceptions in the media about the IAEA’s role in nuclear safety,” he told his anxious countrymen 10 days after the catastrophe.

“I explained that we are not a ‘nuclear safety watchdog’ and that responsibility for nuclear safety lies with our Member States,” Amano said. And aside from sending a few expert contingents to review progress on cleaning up the world’s most impossible mess, Amano has stuck to his guns.

That’s a tough line for Amano to toe when over 200,00 people from his native country are on the run from radioactive fallout in Fukushima, and another 15,000 lie dead as a result of the tsunami and earthquake.

But given the statutes of the IAEA, it’s also a fair enough dose of tough love to dole out.

The statutes, adopted in New York on October 26, 1956, clearly define the mandate of the IAEA as the world’s official cheerleader for nuclear power.

According to the statutes: “The Agency shall seek to accelerate and enlarge the contribution of atomic energy to peace, health and prosperity throughout the world.”

So, what credibility does the IAEA have to say anything about “progress” in the decommissioning process at Fukushima?

By taking such liberties and issuing authoritative pronouncements implying that any facet of this ongoing disaster is progressing in the least, the IAEA is relying on the very public perceptions of its activities that Amano has worked so hard to reverse.

And why take the liberties with the public’s warped perception of the IAEA’s role? Because an advertisement from what amounts to the world’s Madison Avenue for nuclear power that even the most serious of problems can be handled goes a long way toward quelling critics.

Too much radioactive water backing up at the plant and causing pesky, perpetual leaks? The IAEA is ready with an official sounding statement:

“Regarding the growing amounts of contaminated water at the site, (Tepco) should […] examine all options for its further management, including the possibility of resuming controlled discharges [into the sea] in compliance with authorized limits,” [emphasis mine].

In other words, it’s absolutely fine for Tepco – an organization the Japanese government and the country’s new Nuclear Regulatory Authority have been seeking to replace as the overseer of the Fukushima decommissioning process – to dump more radioactive water into the ocean. The IAEA said so. It must be safe.

The sanctimony of the IAEA’s pronouncements Friday piqued the ire of Bellona’s general director and nuclear physicist, Nils Bøhmer, who, with other Bellona staff, has visited Fukushima.

“The IAEA’s blessing of Tepco and its decommissioning effort are in stark contrast to both Japanese regulator and international experts who rightly have criticized the work that has so far been done,” he said.  “Due to underfunding of the decommissioning work we have seen a long series of releases of radioactive water into the environment.”

There is a slight stench of the same kind of regulator-industry collusion and corruption that pervaded Japan in the immediate aftermath of the Fukushima disaster and the IAEA’s most recent spate of blithe encouragement to don’t worry, be happy.

First, it led to horrific, lethal fairy tales that distorted and lied about radiation data, sending thousands that were fleeing Fukushima’s fallout cloud directly into its path.

Second, as determined by two independent reports, crony ties between industry and regulation played an even bigger role in reducing Fukushima to a cesspool of smoldering radioactive rubble than did the tsunami itself.

That’s right – corruption and willful ignorance encouraged between industry and oversight was the number one cause of the Fukushima disaster. The plant, concluded the reports, would has survived the tsunami if industry and oversight had not been so busy scratching each other’s backs and certifying corroded, nearly derelict backup coolant pumps as safe in the weeks prior to the accident.

Fukushima progress – switch on the reactors!

Making a statement saying the persisting chaos at Fukushima is in any way showing progress is just a mendacious gloss with the ulterior motive of fulfilling the IAEA’s prime directive of “accelerat[ing] and enlarg[ing] the contribution of atomic energy […].

All 50 of Japan’s nuclear power plants are currently shut down, while the new regulator, the Nuclear Regulatory Authority (NRA) conducts stringed tests on them before allowing them to go back online. Many of them may be found unsafe and chucked in the process.

The government of Prime Minister Shinzo Abe, however, wants to see those reactors buzzing again. The ludicrous assertion from the IAEA and its veneer of public responsibility suggesting that Tepco is making progress with Fukushima is a handy little nugget for Abe to hurl at critics of his plans for a nuclear future.

The further development of these nuclear plans is now likely to remain nearly entirely secret – as are developments at Fukushima – thanks to Japan’s passage on Friday of a restrictive secrecy law.

Approved by Japan’s more powerful lower house of parliament just over a week ago, the law will punish leaks by officials and reporters who publish them with 10-year prison terms – a situation environmentalists predict will allow the kind of corruption seen during the Fukushima crisis to flourish.

Abe seeks information restrictions in four basic areas: defense, diplomacy, counter-terrorism and counter-espionage. This, according to the Japanese press, will likely include information on the vulnerability of nuclear power plants

So, whether or not this or that nuclear power plant in Japan is safe to go back online may be the kind of information the Japanese government can now legally brush under the carpet.

But don’t worry. The IAEA, who, by its own admission doesn’t give a hoot about safety, but is more than happy to advertise the glories of nuclear power, says progress is being made.