The United States Department of Energy (DOE) has offered to lend a hand to Tokyo Electric Power Co. (Tepco) in its efforts to decommission the tsunami-wrecked Fukushima Daiichi plant, days after the beleaguered utility announced it would begin what many say is one of the most important goals toward that end.

Published on November 5, 2013 by Charles Digges 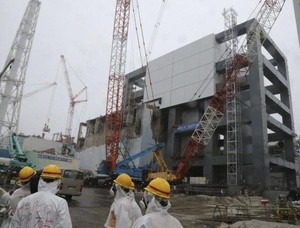 The effort to remove some 1300 spent fuel rods and 200 new ones from the remains of the plant’s reactor No 4 was green lighted by Japan’s  Nuclear Regulatory Authority (NRA) last week, and could begin as soon as November 8 – though Tepco will reportedly be pushing back that start date to accommodate various tests.

The Japanese government has meanwhile said it wants Tepco kicked off the decommissioning job, and has suggested a number of alternate routes to cleanup and remediation.

Upcoming attempts to extract the fuel from the unit No 4 fuel pool have been branded by many news outlets as an apocalypse in the making that could lead to a nuclear explosion far worse than the initial disaster that took the plant over two years ago.

But numerous western experts have poured cold water on that claim, and called for calm during what they estimate is an operation that will go some distance toward improving the situation at the unpredictable wreck of a plant.

The Japan Times reported that the newly-minted NRA has required a rehearsal extraction of a small number of the fuel assemblies sometime later this week before Tepco forges ahead with bulk removal.

Tepco has come under heated scrutiny and criticism of late for its handling of problems at the plant, including several recent leaks of radioactive water.

The plan to move unit No 4’s fuel

The rods in the unit No 4’s pool will eventually be pulled from racks and inserted one by one into a heavy steel chamber while the assemblies are still under water.

Once the chamber is removed from the pool and lowered to the ground, it will be transported a common storage pool in an adjacent and undamaged building on the site of the plant, NHK Japanese Television reported. 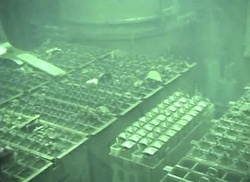 Tepco released an animation of the procedure on its website over the weekend to show how this would be done.

The planned transfer of the fuel from one water filled storage unit to another, said Tepco, would assure that no workers were exposed to radiation.

The Fukushima Daiichi plant hosted six reactors. Of the four reactors in use at the time an 11-meter tsunami following a 9.0 magnitude earthquake hit the plant on March 11, 2011, only the No. 4 reactor avoided meltdown because it had been defueled for maintenance with all of its fuel rods sitting in its spent fuel pool, 30 meters above the ground.

The plant-wide loss of coolant that ensued also put the spent nuclear fuel storage pools at risk, and it was thought during the disaster that the water particularly in the pool at unit No 4 might have evaporated. It was later discovered that enough water had remained to keep the fuel cool. 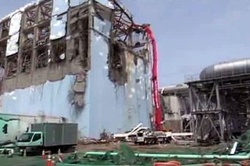 The spent fuel rods were identified by Japan’s Citizens’ Nuclear Information Center in interviews with Bellona in Tokyo as being one of the most important short-term goals Tepco must confront in a decommissioning effort that is expected to last 40 years and cost well over $1 billion.

Are fears higher than actual dangers?

Fears are high among many who say that the slightest misstep in this first sally toward decommissioning could lead to enormous releases of radioactivity into the air and sea, or cause an explosion many times worse than the original disaster  – especially with Tepco, with its soiled reputation, in charge.

The head of Japan’s Nuclear Regulation Authority, Shunichi Tanaka, was frank in stating the operation would be more hazardous than other cleanup efforts because the pool is filled with debris from the hydrogen explosions that occurred at two of the plant’s six reactors in the heat of the crisis.

“It’s a totally different operation than removing normal fuel rods from a spent fuel pool,” Tanaka was quoted as saying by The Guardian. “They (the fuel assemblies) need to be handled extremely carefully and closely monitored. You should never rush or force them out, or they may break. I’m much more worried about this than I am about contaminated water.”

The wreckage-covered storage pool contains 10 times as much radioactive cesium-137 as was released at Chernobyl, according to Nils Bøhmer, Bellona’s nuclear physicist and General Director who last March visited Fukushima with other Bellona staff.

How worried should the world public be?

On November 1, the Associated Press reported that, “the (No. 4) reactor building was damaged by hydrogen explosions, and remains a source of international concern about a catastrophic open-air meltdown in case of a pool collapse.”

When the NRA gave the go-ahead to start the process of removing fuel from the Unit No 4 pool, Charles Perrow, a Yale University professor who analyzes high-risk technologies, told the Australian Broadcasting Corporation – in remarks that were carried widely by various news agencies – that an accident during the spent fuel removal procedure could lead to a nuclear chain reaction and an evacuation of Tokyo.

“Tokyo would have to be evacuated because of cesium and other poisons that are there will spread very rapidly,” Perrow said. “Even if the wind is blowing in the other way it’s going to be monumental. This has me very scared.”

But Thomas Cochran, the Washington-based Natural Resource Defense Council’s nuclear program senior scientist told Bellona in a telephone interview that he considered the dangers to be vastly overplayed and, “That Tokyo would have to be evacuated is complete nonsense.”

“There are lots of worries at Fukushima,” he added. “(The fuel pool) is not one of the pressing ones.”

Edwin Lyman, a nuclear expert with the Washington-based Union of Concerned Scientists, told Bellona by email that a chain reaction in the fuel pool was not a risk he considered significant.

“The biggest risk with Unit 4 pool unloading is that a spent fuel cask might drop and damage the pool, causing a leak that could expose some fuel and cause overheating,” he said.

Hideyuki Ban, co-director of the Citizens’ Nuclear Information Center, told Bellona in an email interview this week that he, too, was concerned about dropping casks and overheating in the pools.

Cochran, though, told Bellona that a dropped fuel assembly was unlikely to cause wide spread contamination.

But Cochran was skeptical that a dropped assembly would even break.

“The vast majority of fission materials are encased in ceramic material – if a fuel assemble casing broke, you would be dealing with noble gasses as well as a small amount of radioactive ones, but I don’t think that would cause any sign of off site exposure,” he said.

Arjun Makhijani, President of the US-based Institute for Energy and Environmental Research, remained concerned about the positioning of the fuel rods in the pool after the initial tsunami and subsequent hydrogen explosions at the plant, and said he hoped the plan was based on more than just Tepco’s assessment.

“I hope that there has been some level of independent scrutiny on the transfer operation, and on the way the spent fuel is sitting in the pool currently,” he told a Berkeley California radio station. “But the lack independent outside advisors is very troubling.”

After the NRA approval for the spent fuel removal process was issued, Japan’s governing Liberal Democratic party immediately proposed that Tepco be stripped of its role in decommissioning the wrecked plant, BBC reported.

Among the options outlined in a proposal by the Liberal Democratic party is a new decommissioning operation that is financially independent of Tepco. Another option is the formation of a government-affiliated administrative agency.

“Tepco is not the right organization to be in charge of this,” he said. He added, however, that there was some urgency in removing the fuel from the pool at unit No 4, and said, “this is the dilemma: how soon can Japan get its act together to create an independent agency to decommission the plant?”

The Citizens’ Nuclear Information Center’s Ban agreed that work on the Unit No 4 pool should be postoponed until an absolutely independent oversight body was fleshed out.

“The CNIC, together with other citizens’ groups demand that the government establish an alternative organization independent from Tepco to be in charge of controlling the (Fukushima) site, and of decommissioning,” wrote Ban by email. “[Local] media coverage suggests the administration (of Prime Minister Shinzo Abe) will split Tepco so it can concentrate on Fukushima’s decommissioning. However, I think a new body completely independent of Tepco should be put in place.”

US DOE help on the way – but in what form?

Over the weekend, Tepco accepted an offer from the US Department of Energy to help with cleanup and decommissioning. In 2012, Japan and the US created a bilateral commission to strengthen engagement on civil nuclear issues. The Commission is meeting early this week in Washington to swap ideas on Fukushima emergency response and regulatory issues.

On Friday, US Energy Secretary Ernest Moniz visited the crippled plant to inspect preparations to remove fuel rods. Moniz has stated, as quoted by RT.com, that the cleanup operation “has global significance” and that “we all have a direct interest in seeing that the next steps are taken well, efficiently and safely.”

It remains unclear, however, whether US help will have a boots-on-the-ground approach to the spent fuel removal and transfer, or whether the DOE role will be purely advisory.

“We will work together to tackle many challenges toward decommissioning,” Tepco President Naomi Hirose said in an interview NHK. “I have high hopes that we will be able to benefit from US experience and expertise at Fukushima Daiichi.”

Bøhmer said that the DOE assistance was “appearing pretty late in the game.” He also said that he didn’t see the DOE as having any experience relevant to cleaning up such a major catastrophe.

“How much influence or input they can effectively have is still unknown given that the US DOE has never dealt with a Chernobyl level event,” he said.

Despite persistent public concerns over potential risks of radiation from the Fukushima plant, Japan’s Liberal Democratic Party has pushed for a restart of the country’s nuclear reactors, all of which are currently offline for stringent safety checks being carried out by the NRA.