Japanese officials yesterday escalated their alarm, saying that radioactive water from the crippled Fukushima Daiichi plant was not only poised to leak – but was already spilling into – the ocean, in yet another public relations blunder for the plant’s owner, Tokyo Electric Power Co., or Tepco, various government sources told Bellona.

Published on August 8, 2013 by Charles Digges 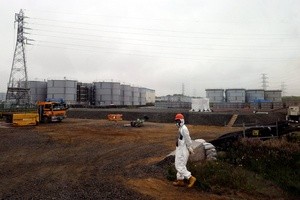 Photo: A pool photo taken during a visit of journalists to the Fukushima Daiichi plant.

Tepco on Wednesday admitted that some water had been escaping past underground barriers into the ocean, but failed to put a figure on it.

When they finally came clean yesterday to government officials that the leak rate was some 300 tons a day of highly contaminated radioactive water, and that they didn’t have any real idea as to how long such emissions had been taking place, the government of Prime Minister Shinzo Abe announced it would be stepping in to assist the beleaguered utility staunch the flow.

The revelation of the quantity of water escaping the inundated plant amounted to an acknowledgment by Tepco that it hardly has the situation at Fukushima Daiichi – more than two years after it was hit by a triple meltdown caused by a huge earthquake and tsunami – anywhere close to under control.

Indeed, it was only recently that Tepco had admitted that it was having leakage problems with its underground water barriers at all.

The buildup of water, according to various media reports and interviews to Bellona seem to be leading in the direction of further dumps by Tepco of irradiated water into the ocean, some two years after Japan and the world though that would no longer be necessary.

Calling water containment at the hobbled nuclear station an “urgent issue,” Abe, the popular, yet pro-nuclear, head of state, ordered the government for the first time to get involved to help struggling Tepco handle the crisis.

According to estimates by Reuters and government officials who emailed Bellona, the leak from the plant 220 km northeast of Tokyo is enough to fill an Olympic swimming pool in a week.

The water is spilling into the Pacific Ocean, though it was not immediately clear how much of a threat it poses. 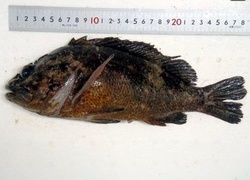 Local fishermen and independent experts had at that point already suspected that massive leaks of highly irradiated water from the plant were ongoing, but Tepco had denied the claim.

Overflows of water and dumping highly irradiated amounts of it into the ocean became a problem early in the Fukushima crisis.

The 11-meter tsunami that hit the plant knocked out all back up cooling systems, necessitating that thousands of tons of sea water be fired from water cannons and dumped from helicopters as three of the plant’s six reactors were melting down and spent nuclear fuel storage ponds were heating up.

A few weeks later, the government allowed Tepco to dump more than 11,500 tons of highly irradiated water into the Pacific to relieve flooding in the chambers below the plant’s reactors to the dismay of the local fishing community – a staple of Japan’s food economy.

Disaster far from under control

Nils Bøhmer, Bellona’s general manager and nuclear physicist says the current crisis again emphasized that efforts to contain the disaster at Fukushima Daiichi are still largely improvised. Indeed, many of the setbacks that have troubled Tepco in its efforts to bring the plant to heel would be nearly comical were it not for the gravity of the situation.

In March, a rat gnawed through exposed wiring, setting off a scramble to end yet another blackout of vital cooling systems at the plant. Workers who were dispatched to set up wiring around circuit boxes to prevent further rodent incursions themselves then tripped another coolant system blackout.

Then, in April, jerry built pits for a flood of contaminated water sprang leaks themselves, releasing some 120 tons of water with an estimated 710 billion becquerels of radioactivity.

Tepco caught in another lie

Wednesday’s delayed admission by Tepco that water is, in fact, leaking into the ocean deals yet another body blow to the utility’s efforts at restoring its credibility and perceived ability to deal with the Fukushima crisis, which is still, underscored Bøhmer, very much underway.

The company has been subjected to withering criticism for its failure to prepare for the tsunami and earthquake, for a confused response to the disaster and for covering up, and outright lying about, shortcomings, errors and mismanagement.

“We think that the volume of water (leaking into the Pacific) is about 300 tonnes a day,” Yushi Yoneyama, an official with the Minister of Economy, Trade and Industry (METI), which oversees energy policy, told reporters in Tokyo on Wednesday.

Other government officials, who asked they not be identified as they are not authorized to discuss the issue, confirmed to Bellona in emails that the water is coming from the area among reactor Nos 1,2 and 3 – which suffered hydrogen explosions and meltdowns early in the March 2011 disaster –where Tepco has tried to block the flow of the contaminated overrun by chemically hardening the soil.

Media reports early on Thursday indicated Prime Minister Abe, who staunchly defends the country’s nuclear program, took a calculated risk by putting the himself between Tepco and the Japanese public’s eroded trust in utility’s ability to truthfully handle what is expected to be an $11 billion, 40 year clean up effort.

“This is not an issue we can let Tepco take complete responsibility of,” Abe was quoted by the New York Times as telling a group of cabinet ministers gathered to discuss the water problem that has swiftly emerged as the biggest challenge at the plant. “We must deal with this at the national level.”

But, should the efforts of Abe’s government fail as badly as Tepco’s appear to be, they will do nothing to redeem public faith in the government, which has also taken a beating for its handling of the crisis.

Letting Tepco clean up its own mess a mistake?

A number of analysts who spoke to the New York Times said Abe’s actions indicated that the government was admitting that entrusting Tepco, the same company that cause the disaster, with the unprecedented cleanup effort was a mistake.

Tepco’s continued crony relations between government and industry played a large part in occasioning the disaster in the first place, an independent government report on the incident released in December 2011 said.

“[Abe’s move] is an admission by the government that Tepco has mismanaged the cleanup and misinformed the public,” Eiji Yamaguchi, a professor of science and technology policy at Doshisha University in Kyoto, told the Times. “The government has no choice but to end two years of Tepco obfuscating the actual condition of the plant.”

Regardless of who is in charge, however, Japan’s newly minted Nuclear Regulation Authority (NRA) is floating what many scientific analysts consider to be the inevitable: further dumping by the plant of irradiated water into the Pacific.

At a news conference last week, Shunichi Tanaka, chairman of NRA, took the lead in warming up the public, saying that eventually “it will be necessary to discharge water,” a possible solution that will raise concerns not only in Japan but in other Pacific Rim countries.

Abe has stopped short of pledging funds to address the issue of the contaminated water, but the ministry has requested a budget allocation, an official told Reuters.

The Nikkei newspaper said the funds would be used to freeze the soil to keep groundwater out of reactor buildings – a project estimated to cost up to 40 billion yen ($410 million).

Tepco’s handling of the cleanup has complicated Japan’s efforts to restart its 50 nuclear power plants. All but two reactors at Japan’s central Ohi plant have remained  shut since the disaster because of safety concerns.