Japan’s nuclear regulator has suggested wants raising the severity level of a radioactive water leak discovered Monday at the tsunami-struck Fukushima-Daiichi plant from one to three on a seven-point international scale, Japanese media have reported. 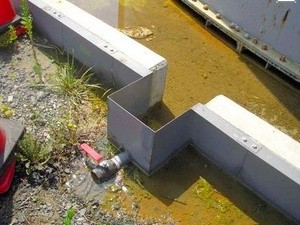 News that the leak level has reached new heights of urgency dovetails with a new spike in thyroid cancer diagnosis rates among Fukushima youth who were exposed to fallout after the initial catastrophe in March 2011.

Six more young adults who were below the age of 18 when the Fukushima accident occurred were Wednesday diagnosed with the cancer, bringing the total number of confirmed thyroid cases resulting from the disaster to 18, Kyodo New Agency reported.

The new characterization of the leak would reclassify it from an “anomaly” to a “serious incident” on the seven point International Nuclear Event Scale (INES) maintained by the International Atomic Energy Agency (IAEA).

Plant operator Tokyo Electric Power Co. (Tepco) said about 300 tons (some 300,000 liters) of contaminated water has leaked from one of hundreds of 1,000-ton cylindrical steel tanks around the decimated plant, much of which has apparently seeped into the ground, Asashi Shimbun reported.

The utility is also checking for leaks at other tanks holding contaminated water at the site.

Bellona General Director and nuclear physicist Nils Bøhmer question whether Japanese authorities shouldn’t consider moving the classification of the accident to a Level 4, which would characterize it as “an accident with local consequences.”

“That highly radioactive water is presumably seeping into the ground would imply that this is somewhat more serious that the Level 3 Japanese officials are suggesting,” said Bøhmer. “Fukushima is the never-ending story and it is just getting worse and worse.”

Tepco officials said they presume the leaky tank is located somewhere west of Fukushima-Daiichi’s reactor No 4. Part of the water remains pooled within a concrete barrier surrounding a group of 26 tanks, said the paper.

Some one thousand tanks have been built to contain the water from the three  melted down reactors, as well as underground water that is contaminated when it runs into reactor and turbine basements.

However, 350 of these tanks, holding 300,000 tonnes of water, are less durable than others, with rubber seams. Japanese officials say they have no choice but to keep building tanks to contain the contaminated water.

Jerry-built coolant systems continue to keep the reactors and spent fuel ponds cool, but the consequence has been that enormous volumes of contaminated water have to be stored onsite at the destroyed nuclear power plant.

Tepco said that because the leaking tank is assumed to be about 100 meters from the coastline, the leak does not pose an immediate threat to the sea.

But Hideka Morimoto, an NRA spokesman, stomped on that report from Tepco, telling the Associated Press that contaminated water could reach the sea via a drain gutter.

The incidents have shaken confidence in the reliability of the tanks.

Four other tanks of the same design have had similar leaks since last year. Earlier this month, it was reported that 300 tons of low-level contaminated water a day were escaping the territory of the plant and sullying the waters of the Pacific.

The most recent water incidents are viewed as the most serious since the initial explosion and meltdown.

A puddle of the contaminated water was emitting 100 millisieverts an hour of radiation, Kyodo news agency said earlier this week.

Masayuki Ono, general manager of Tepco, told Reuters news agency: “One hundred millisieverts per hour is equivalent to the limit for accumulated exposure over five years for nuclear workers; so it can be said that we found a radiation level strong enough to give someone a five-year dose of radiation within one hour.”

This severely complicates measures to stem the leak: The water is so radioactive that teams working to stem the flow must constantly be rotated because of the high exposure rates, and it is clear that most of the contaminated water has already been absorbed into the ground.

“We are extremely concerned,” Morimoto told reporters Wednesday. He urged Tepco to quickly determine the cause of the leak and its possible effect on water management plans.

Tepco spokesman Masayuki Ono told AP that workers were pumping out the puddle and the remaining water and will transfer it to other containers in a desperate effort to prevent it from escaping into the sea ahead of heavy rain predicted later in the day around Fukushima.

By Tuesday afternoon they had captured only about 4 tons (4,000 liters), Ono said.

Japanese officials first suggested the most recent tank leak be classified as a level one incident on the INES scale. Suggestions by Japan’s newly constituted Nuclear Regulatory Authority (NRA) represent the third time incidents surrounding the Fukushima disaster, which began on March 11, 2011, have been upwardly revised on the INES scale.

The Fukushima incident was initially reported as a Level 5 “accident with wider consequences” on INES – by Japanese authorities immediately following the triple meltdown and reactor building explosions triggered by a total loss of primary and back up cooling systems after an 11-meter tsunami hit the plant.

Within days, that figure was upwardly revised by Japan to a Level 7 “major accident” – the first Level 7 since Chernobyl.

Japanese media has reported the upward revision of Monday’s radioactive water leak is a provisional measure that must be confirmed by the IAEA – just as the initial accident classifications were.

The Chinese Foreign Ministry said in a statement that it “hopes that the Japanese side can earnestly take effective steps to put an end to the negative impact of the after-effects of the Fukushima nuclear accident.”