Workers at the stricken Fukushima nuclear power plant who were installing wire nets Friday to keep rats away from a vital cooling system instead tripped that system, causing it to fail for the second time in less than a month, various news agencies reported.

Published on April 8, 2013 by Charles Digges 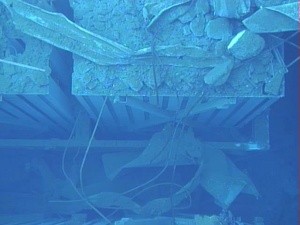 The ponds cool the fuel – which generates intense heat – and provide shielding from radiation. The spent fuel remains in the ponds for a year or more.

Cooling was restored by late evening on Friday, and there was no imminent danger to the 566 nuclear fuel rods stored in the pool, Tepco said in a statement. It would have taken at least two weeks for the pool to have risen above the safe level of 65 degrees Celsius, Tepco said.

This indicated that the spent fuel remained stable and did not pose an immediate danger to the environment, news agency AFP quoted Tepco as saying.

In total, the outage lasted for about three hours Friday afternoon, Tepco told the BBC.

Four workers using wire meshing to seal a space around electric cables caused a ground fault, or the accidental flow of current to the ground. No one was injured, but the ground fault shut off electricity to the cooling system at the No. 3 reactor fuel pond, Tepco said.

The wire nets are meant to keep the rats out. But the end of one of the wires may have momentarily come into contact with a live terminal, Tepco reported.

The recent power failures have raised concerns over continued vulnerabilities at the plant two years after a large earthquake and tsunami knocked out its vital cooling systems, resulting in multiple fuel meltdowns and forcing 160,000 people to evacuate.

“Two years after the accident we see that Tepco is still operating with improvised equipment to maintain the plant’s safety,” said Nils Bøhmer, Bellona’s general manager and nuclear physicist, who last month visited Fukushima with other Bellona staff. “This begs the question of whether Tepco is really spending enough money to keep the plant under control.”

The plant, which the New York Times reported is still strewn with debris, still relies on makeshift cooling systems, some of which were hastily jerry built in the accident’s chaotic aftermath.

The spent-fuel ponds, which hold far more radioactive material than the cores of the plant’s Nos 1,2 and 3 reactors, which melted down in hours following the March 11, 2011 earthquake and tsunami have been a particular source of concern.

The most precarious of these ponds, say Tepco and nuclear experts, is the one located at reactor No 4. Though reactor No 4 did not melt down, the structure of its reactor building was badly damaged by hydrogen explosions at adjacent reactors.

Some have said that a long-term coolant cut or further structure damage to that pond could result chain reactions and radiation releases higher than those of the initial accident. Tepco intends to have all fuel removed from pond No 4 in a year, Tokyo’s Citizen’s Nuclear Information Center told Bellona.

A blackout disabled cooling at four fuel pools last month, an event the company traced to a rat that might have gnawed on power cables and caused a short circuit. Engineers found its scorched body in a damaged switchboard.

Tepco has since installed mousetraps at the site and promised to plug holes through which rats and other rodents might enter buildings and gnaw on important equipment, the New York Times reported.

Tepco has also promised to speed up work to install backup power cables to the fuel pools.

Some 160,000 people remain displaced by the disaster.