Less than two months shy of the second anniversary of the devastating triple nuclear meltdown at Japan’s coastal Fukushima Daiichi plant, a fish containing more than 2,500 times Japan’s legal limit for radiation has been caught by the plant’s operator in waters near the wrecked facility.

Published on January 21, 2013 by Charles Digges 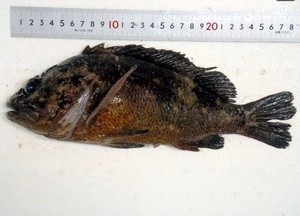 The ‘murasoi’ fish, similar to a rockfish – indicating an amount of cesium measuring 254,000 Becquerel per kilogram, or 2,540 times Japans limit for radiation in seafood – was caught at a port inside the plant by its owner, Tokyo Electric Power Co. (TEPCO) Friday, according to AFP.

The utility also released a photo of the fish, caught near an unloading point north of the No. 1 through No. 4 reactors. No fishermen operate in the nuclear plant’s port.

Friday’s catch shatters the previous record for wildlife contamination as a result of radioactive contamination, which was was 25,800 Becquerel of cesium per kilogram found in two greenlings caught about 20 kilometers north of the plant in August 2012, the Asashi Shimbun newspaper reported.

Other countries are also increasingly distressed by the amount of irradiated marine life turning up near their coastlines along the Pacific Rim: Over the summer, Russia’s state English language television station RT reported concern over fish caught off its coast near Japan.

In May, a tuna contaminated by low levels of radiation was found near the California coast, Reuters reported.

In October, TEPCO admitted that radiation leaks at the plant had not fully stopped, said Asashi Shimbun.

“All of this amounts to the fact that the Fukushima disaster is still very much a work in progress,” said Nils Bøhmer, Bellona’s general manager and nuclear physicist. “The fact is we will not know the full effects of the disaster for many years to come,” he said, adding, “It is not at all surprising that we are turning up some of the more shocking evidence of  the effect of radiation on various ecosystems two years later.”

A brief history of food contamination following the disaster

In 2011, after a March 11, 9.0 magnitude  earthquake and 11-meter tsunami devastated the Fukushima region and set off a triple meltdown at three of five of the operating reactors at the Fukushima Daiichi plant, Japan barred beef, vegetables, milk, seafood and mushrooms grown near the affected area from both domestic markets and exports over safety concerns.

Science magazine published an October article revealing that the levels of cesium in seafood around the still smoldering and leaking plant had not decreased since 2011.

August samples collected by the article’s authors were also found to have cesium levels 250 times over what Japanese authorities consider safe.

Japan stressed that they understood the numbers of contaminated seafood are “extremely high,” but also pointed out that radiation was detected only in the kinds of fish found closest to the plant.

An editorial published last month in Japan’s English-language Japan Times, about the fishing situation in general also stressed that waters close to the plant were not fishing areas, and that open fishing grounds surrounding the country’s Fukushima prefecture were being unfairly stigmatized at market.

Many fishing areas near Fukushima, especially northerly waters, have been declared safe by government regulators, but their harvests were routinely turned away from market in Tokyo, said the newspaper.

Given the government and TEPCO’s conflicting statements and generally poor handling of distributing public information both during and for several months following the nuclear emergency, public trust toward declarations of safety are bound to be low.

Yet, many international bodies have recently taken a new approach toward fish imports from Japan thanks largely to the new government, and more importantly, the newly constituted independent nuclear regulator agency.

In October 2012, the European Commission announced that it would relax regulations on imports of Japanese food starting on November 1.

The restrictions were introduced after the quake and tsunami, with many countries such as the US, Australia, Canada, Germany, France and the UK either halting food imports or starting additional inspections of Japanese imports.

Fukushima debris at sea and heading toward the US West Coast

In September, a number of US scientists in various papers and concerned ecologists wrote that the impact to the US West coast of radiation had been far greater than initially estimated by Japanese and American scientists. Equal numbers of scientists and universities – most notably the University of California at Berkeley – argued that the effects had been negligible.

But the independent reports offered compelling evidence that the scope of potential radiological hazards to the US West coast had been underestimated and were, at the very least, worthy of further and more serious study.

On Friday, Hawaii’s Department of Health reported that debris from Japan was washing up on the shores of the islands of Oahu and Kauai, and that the debris was being tested for radiation. Results are not currently available, but the appearance of the debris has triggered serious environmental concerns over both water pollution and radiation exposure.