Japanese officials withheld information and denied the facts of the Fukushima Daiichi nuclear disaster, including ignoring predictions from their country’s own radiation forecasting system, in order to limit costly and disruptive evacuations and to avoid public questioning of the politically powerful nuclear industry. 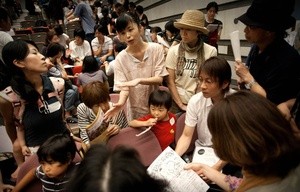 The depth of the neglect was reported by the Associated Press and corroborated with an ex-government source in Japan by Bellona, as well as by reports in the New York Times.

Bellona’s nuclear physicist, Nils Bøhmer, has insisted throughout the crisis that Japan has been withholding information about radiation dangers. Powerful political forced within Japan have created a culture of closed-mouthed, unquestioning deference to nuclear power, Bøhmer has said.

“This is another example of the disarray of the Japanese nuclear community, including the industry and the Government,” said Bøhmer.

“This shows the urgent need for drastic changes in the Japanese nuclear industry, if nuclear energy should have a future at all in Japan,’ he said

The sweep of how much information had been withheld from the Japanese public has only begun to be revealed in the past two days.

According to reports, Japan’s system to forecast radiation threats was working from the moment its nuclear crisis began on March 11, after and earthquake and tsunami pummeled the Fukshima Daiichi plnat 240 kimometers north of Tokyo.

As officials planned a venting operation certain to release radioactivity into the air, the system predicted Karino Elementary School would be directly in the path of the plume emerging from the nuclear plant – but the report was useless as no one acted on it.

Instead of clearing out the school, which is 10 kilometers from the plant, it was turned into an evacuation shelter.

Reports from the radiation forecast system were sent to Japan’s nuclear safety agency, but the flow of data stopped there, AP reported.

Prime Minister Naoto Kan and others involved in declaring evacuation areas never saw the reports, and neither did local authorities. So thousands of people stayed for days in areas that the system had identified as high-risk, said the ex-government source to Bellona.

The 400 students, teachers, parents and others gathered at Karino Elementary School, in the town of Naime, at the pinnacle of the crisis.

They were never informed of the predictions that they were at risk. In an interview with the AP, Namie’s mayor said it took more than 24 hours for him to realize — from watching TV — that the evacuees were in danger. He told AP he sent buses to move some of them out. But, unaware of the risks, they were taken to another part of town also forecast to be in the radiation plume’s path. Most were left to fend for themselves.

“When I think about it now, I am outraged,” Principal Hidenori Arakawa said. “Our lives were put at risk.”

Near complete communication break down

Documents obtained by the AP, the New York Times and interviews by Bellona with key officials and a review of other newly released data and parliamentary transcripts show that the government’s use of the forecast data was crippled by communication breakdowns and a lack of even a basic understanding of the radiation forecasting system at the highest levels.

It’s unclear how much radiation people might have been exposed to by staying in areas in the path of the radioactive plume, let alone whether any might suffer health problems from the exposure. It could be difficult to ever prove a connection: Health officials say they have no plans to prioritize radiation tests of those who were at the school.

Seiki Soramoto, a lawmaker and former nuclear engineer to whom Prime Minister Naoto Kan turned for advice during the crisis, blamed the government for withholding forecasts from the computer radiation forecasting system, known as the System for Prediction of Environmental Emergency Dose Information, or Speedi.

“In the end, it was the prime minister’s office that hid the Speedi data,” he told Bellona Web.

“Because they didn’t have the knowledge to know what the data meant, and thus they did not know what to say to the public, they thought only of their own safety, and decided it was easier just not to announce it.”

In an interview with the New York Times, Goshi Hosono, the minister in charge of the nuclear crisis, dismissed accusations that political considerations had delayed the release of the early Speedi data.

He said that they were not disclosed because they were incomplete and inaccurate, and that he was presented with the data for the first time only on March 23.

“And on that day, we made them public,” said Hosono, who was one of the prime minister’s closest advisers in the early days of the crisis before being named nuclear disaster minister. “As for before that, I myself am not sure. In the days before that, which were a matter of life and death for Japan as a nation, I wasn’t taking part in what was happening with Speedi.”

The computer forecasts were among many pieces of information the authorities initially withheld from the public.

Meltdowns at three of Fukushima Daiichi’s six reactors went officially unacknowledged for months. In one of the most damning admissions, nuclear regulators said in early June that inspectors had found tellurium 132, which experts call telltale evidence of reactor meltdowns, a day after the tsunami, an ex-government official told Bellona in an email interview.  But no one told the public for nearly three months.

The timing of these confessions in late May and early June corresponded with a visit to Japan of inspectors from the International Atomic Energy Agency, the New York Time reported, suggesting to critics that Japan’s nuclear establishment was coming clean only because it could no longer hide the scope of the accident.

On July 4, the Atomic Energy Society of Japan, a group of nuclear scholars and industry executives, said, “It is extremely regrettable that this sort of important information was not released to the public until three months after the fact.”

“The withholding of information could put people at risk to radiation exposure, and could lead to negative health consequences,” he said.

How Speedi works: Something  the government doesn’t understand

The Japanese Speedi network was built in 1986 for $140 million. It has radiation monitoring posts nationwide and has been tested in a number of drills, including one the Prime Minister Kan led for the Hamaoka nuclear facility just last year.

Even so, according to the prime minister’s office, Kan and his top advisers never asked for or received the data. Despite taking part in the Hamaoka drill, Kan admitted he didn’t understand how Speedi worked or how valuable the data was, AP reported.

“I had no idea what sort of information was available,” he told Parliament on June 17. “I didn’t know anything about it then, and there was no way I could make a judgment.

In two post-crisis assessments, a report to the International Atomic Energy Agency and an annual white paper on science and technology that were obtained by AP, his government has said the network “failed to perform its intended function.”

A senior member of Kan’s crisis team, Nuclear Safety Commission chief Haruki Madarame, went so far as to say the Speedi data was no better than “a mere weather report.”

He said the predictions were of no value because they lacked accurate radiation readings. Some of the system’s monitoring capabilities were compromised by the tsunami and ensuing power outages, and the utility that runs the Fukushima plant, TEPCO, did not provide readings of its own.

But Speedi officials told AP that Madarame’s position reflects a fundamental misunderstanding of what their system is designed to do.

When the amount of radioactivity that has been leaked is known, that is entered into its system, along with weather and terrain data, and a hazard map is generated. If the amount is not known — as was the case with Fukushima — a standard and relatively low value of one becquerel is used.

While that doesn’t show the actual radiation risk, it will show the general pattern and direction of the plume. Then when the size of the leak becomes known, the map can be updated. If the actual leak turns out to be 100 becquerels, for example, the results would be multiplied by 100.

That technique allowed Speedi to produce reports hours before officials began venting disabled reactors — when there would have been less radiation to measure outside the nuclear plant even if the system’s monitoring equipment had been working perfectly, said AP.

Speedi forecasts were right on

In the Fukushima case, later data proved the forecasts to be highly accurate. Most of Namie, for example, has since been declared too dangerous for habitation.

Speedi, run by the education and science ministry, provides its data to other government agencies such as the nuclear safety agency for passage up the chain and then dissemination to local authorities.

Officials won’t say why that didn’t happen, sticking to their position that the data was useless anyway.