Japan’s nuclear watchdog, the Nuclear Safety Commission, has denied public access to the results of thyroid check-ups for more than 1,000 Fukushima children that were exposed to radiation after the March 11 natural disasters made Fukushima Daiichi the worst nuclear accident since Chernobyl. 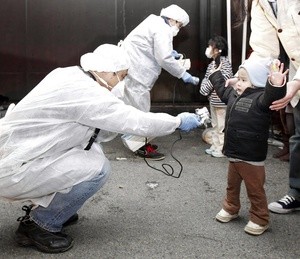 The incident is yet another unsettling reminder of the tight ties between Japan’s nuclear industry and its regulators, who, it has recently been proved, have distorted, ignored and outright lied about the impact the radiation still spewing from the tsunami-rocked Fukushima Daiichi plant has and will have.

Last week, it was revealed that the Japanese government ignored its own multi-million dollar radiation forecasting system, thereby evacuating hundreds of schoolchildren directly into the path of the radiation plume emitted from the plant. Similarly, no data is available on the exposure on those erroneously settled into zones of high radiation.

According to environmentalists, it will – as in the case of Chernobyl – be a matter of decades before the full extend of radiation on the human population of Japan can begin to be tallied.

Though, while data on human exposure continues to be sparse, it is now clear that the radioactive isotope caesium 137 from Fukushima Daiichi has invaded Japan’s food chain from mushrooms to fish to rice and beef.

Japan has meanwhile indicated it will set up a new nuclear safety watchdog under the auspices of the Environment Ministry as part of an effort to tighten safety standards that were criticized while the watchdog was under the control of the Trade Ministry – something many Japanese officials have told Bellona was a direct conflict of interest.

Critics of Japan’s Nuclear Safety Commission’s decision to hush up the thyroid screens have accused the commission of denying the public accurate information about the crisis.

“I think it is vital for the nuclear safety commission to be one hundred percent open about information regarding radiation after the Fukushima accident in order to start to build up its trust among the Japanese public,” said Nils Bøhmer, Bellona’s nuclear physicist, of secreting the children’s thyroid data.

The Nuclear Safety Commission had earlier uploaded the test results of more than 1,000 children who were checked to see if radioactive substances were accumulating in their thyroids.

But it has been revealed that earlier this month the commission removed the data from its website, citing confidentiality factors for the patients involved, ABC news reported.

Japanese health specialists have slammed the commission’s decision, saying the commission fears a negative public reaction to children’s exposure to radiation from the crippled Fukushima plant.

Children in Japan had already been put at far higher risk when on May 25, Japan’s Education Ministry weakened nuclear safety standards in schools, allowing children to be exposed to 20 times the amount of radiation than was previously permissible. This means Japanese children are allowed to be exposed to as much radiation annually as a German nuclear power plant worker, or 20 milisieverts a year.

Dose limits for civilians in most countries using nuclear power, including Japan, says the London-based World Nuclear Association, are set at 1 milivsievert per year.

Revelations of another cover-up are especially damaging for the pro-nuke lobby at a time when the government of Prime Minister Naoto Kan and the nuclear industry are heavily divided about the future role of nuclear energy in Japan.

Kan – a former environmental campaigner – last week spoke out in favor of phasing out nuclear power in Japan. But his handling of the Fukushima crisis has put his political career in severe doubt and Kan has taken steps toward resignation, but has made no formal announcement about when he may step down.

Japan’s nuclear industry – which arguably, according to observers, has more clout than Kan’s ailing administration  – contends Japan will suffer a 20 percent energy shortage if nuclear power plants that went offline on March 11 are not turned back on.

But public outrage and weekly protests numbering in the hundreds of thousands will likely drown that out. Kan himself proposed that he would like 20 percent of Japan’s energy to come from alternative sources during the decade beginning in 2020.

The new nuclear watchdog at the Environment Ministry is hoped by environmentalists to close the revolving door between nuclear industry promotion and regulation.

“I believe that the decision to move the watchdog under the auspices of the Ministry of the Environment is a good step forward in the process of regaining public trust,” said Bellona’s Bøhmer.

That public trust was shattered throughout the ongoing crisis as public officials prevaricated about events and technicians with knowledge of Fukushima Daiichi came forward with shocking, decades-silenced information.

Many engineers that had participated in making the General Electric Mark 1 reactor – which constitutes five of the six reactors at Fukushima Daiichi – came forward with accounts that they had been ignored by Japanese and American authorities when they pointed out fatal flaws in the Mark 1’s design.

Of main concern was the small size of the containment vessel that allowed for hydrogen pressure build-up when overheating. Three reactor buildings at Fukushima Daiichi exploded early in the crisis for this reason.

And two weeks before the disaster began, regulators and industry agreed to grant a 10-year operational life span extension to 40-year-old reactor No 1 at Fukushima Daiichi despite the fact that regulators pointed out dozens of flaws in the diesel back up generators for the reactor’s cooling system, including salt water corrosion and metal fractures.

When the 15-metre tsunami hit, primary and back-up power for coolant was completely lost – the single most important factor driving the ongoing crisis. Seawater had to be sprayed and dumped on overheating reactors from fire trucks and helicopters. Now that water is massively contaminated and presenting constant flood threats.

The Environment Ministry, while less powerful than the trade ministry which previously both regulated and promoted nuclear power, is seen as relatively untainted by the collusive ties with industry which plagued the existing safety agency.

The new agency will, as expected, combine the Nuclear and Industrial Safety Agency (NISA) with another government advisory body. Experts have warned that the organization change alone may not be enough to restore tattered public faith in Japanese utilities or ensure effective oversight.

“We’ve decided to separate the nuclear safety regulation division of the NISA from the trade ministry, and unify atomic safety-related affairs under the Environment Ministry,” Kan told his ministers, according to Reuters.

“It is a theme of national proportions, and a conclusion needed to be reached swiftly,” Hosano told reporters on Friday.