Japan’s incoming Prime Minister Yoshihiko Noda has said that his country will continue to use nuclear power for the next 40 years in the wake of the Fukushima disaster, taking a swerve away from outgoing Prime Minister Naoto Kan’s promise of a non-nuclear future in half that time after the worst international nuclear disaster in 25 years. 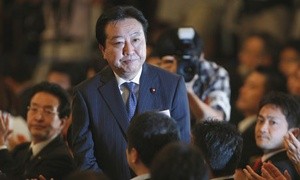 Meanwhile, more than a third of Japan’s nuclear reactors will have to apply for license extensions within five years or face decommissioning at a time when the industry’s safety record is in tatters. Japanese opinion polls show about 70 percent of the public wants to reduce reliance on nuclear power.

Germany is also finding itself less comfortable in recent days with its landmark post-Fukushima vote to shutter it’ nuclear power plants by 2022, citing massive energy shortfalls not seen since World War II, according to some critics. Switzerland, which also voted nuclear power out, too is grappling with how to handle its nuclear waste after it shuts its reactors in 2035.

Noda, who was elected yesterday as the head of Japan’s ruling party, said his country will “overcome energy shortages and guarantee the stable supply of power by utilizing nuclear plants after confirming their safety.”

“I will set up a nuclear safety agency to consolidate the regulatory framework and regain public trust in atomic power generation,” he said in his policy statement, which also included broad support for renewable energy as well as the phase out of nuclear power over 40 years – a nod to his predecessor and public opinion.

Less than a quarter of Japan’s 54 reactors are operating either because they were shut down by the March 11 9.0 magnitude earthquake or because of scheduled maintenance. The nuclear energy provided about 30 percent of Japan’s electricity before the crisis.

Japan’s reactors were originally licensed for 30 years and operators can apply for 10-year extensions up to a maximum of six times.

Bellona’s nuclear physicist and executive director, Nils Bøhmer, however, said that a strong, independent nuclear oversight agency has to be established in Japan before it entertains talk of restarting those reactors in the country that still are not operating.

“Before Noda can think about reopening nuclear reactors he needs to totally reorganize nuclear regulation and build up public trust that there is a credible nuclear industry watch dog in Japan,” said Bøhmer

Vladimir Slivyak, co-chair of Russia’s Ecodefence and an expert on Fukushima agreed, saying in an email interview that Japan’s nuclear safety watchdog “has been saying for decades that their nuclear reactors are in fine status – and then the Fukushima disaster happened.”

Slivyak, however, said that restarting any of Japan’s aged reactors “is a risky approach” even in the presence of an independent regulator, which he thinks could easily become compromised in an effort to regain devastated public trust.

“If the government wants safety checks to show a good picture, the inspectors won’t cause any trouble as has happened many times in the past,” said Slivyak, adding that Noda is attempting a precarious balancing act by “trying to cool down anti-nuclear sentiment in society while not making more trouble for the nuclear industry.”

Reactor operation extensions must be halted

Twenty-one reactors will soon require license extensions, according to data from power companies and the World Nuclear Association. Of those, seven will enter their fifth decade if extensions are granted. Noda has made no indication whether his government plans to issue these extensions.

Aside from Fukushima, Bøhmer cited weak nuclear regulatory structure in Russia as an example of irresponsible reactor lifespan prolongation: In Russia, hardly any independent oversight is required to extend old reactors’ operational periods.

Slivyak called on Noda to cease any reactor lifespan extensions.

“This is a direct route to repeating the Fukushima disaster all over again,” said Slivyak. “And it may not be an earthquake or a tsunami the next time around, but any number of other factors.”

The Fukushima accident is the second time in four years a domestic atomic plant has been damaged in an earthquake. In 2007, a 6.8 magnitude earthquake rocked the Kashiwazaki-Kariwa nuclear power plant – the world’s largest – causing a leak of radioactive water that was sloshed from its containers by the jolts. The quake also caused a fire.

Even with Japan under its first mandatory power savings in the country since the 1970s as a result of the earthquake and nuclear crisis, metallurgist Hiromitsu Ino at the University of Tokyo said any operational life spans must be avoided.

“Nuclear reactors shouldn’t be in operation for more than 40 years,” he told the Bloomberg news agency. “

Decommissioning aged nuclear power reactors would cost some $13 trillion. Kansai Electric Power Co (KEPCO) the nation’s most nuclear-reliant utility, in 2008 had $3.9 billion in reserve for decommissioning, its website says.

Even KEPCO President Makoto Yagi said earlier this month that after 30 years of operation, reactors are “pretty old.”

One of Fukushima Daiichi’s six reactors had been granted another decade of used by Japanese regulators only two weeks before the March 11 tsunami hit – meaning it would supposedly have run until it was 50 years old.

“What we witnessed at the [Fukushima Daiichi] plant was damage to an installation that was built 40 years ago and designed 50 years ago,” said Gennady Pshakin, a physicist based in Obninsk, the site of Russia’s first nuclear power plant.

Regulators had warned industry officials that diesel back up power generators at Fukushima Daiichi’s reactor No 1 had saltwater corrosion, making it doubtful they would survive flooding. Loss of back up power to cool reactors was the number one cause of the meltdowns, explosions and massive released of radiation that destroyed the plant.

Nuclear boom to bust – will the bust hold

The world experienced a boom in nuclear power before the 1979 Three Mile Island accident in the US and the 1986 Chernobyl disaster halted the industry’s expansion, except in a few countries, including China and India.

Since the Fukushima crisis, Germany, Italy and Switzerland have opted to abandon nuclear power.

Germany depends on nuclear power nearly 25 percent of its energy needs and, as the economic powerhouse of Europe, is being watched most closely after its decision to ditch nuclear was voted into law.

Within days of Fukushima, the government shut down the eight oldest of Germany’s 17 reactors. Three months later, parliament then cemented that the remaining nine would be unplugged from the grid by 2022 in a landmark vote that pledged a growing reliance on renewables

Since then, electricity producers are scrambling to ensure an adequate supply. Economists and politicians argue over how much electricity prices will rise.

European papers report that Germany will have to get by with importing massive amounts of nuclear produced electricity from France – which itself relies on nuclear power for 80 percent of its own energy needs – if it is to stave off blackouts.

“It’s easy to say, ‘Let’s just go for renewables,’ and I’m quite sure we can someday do without nuclear, but this is too abrupt,” Joachim Knebel, chief scientist at Germany’s prestigious Karlsruhe Institute of Technology told the New York Times.

He characterized the government’s shutdown decision as “emotional” and pointed out hat in periods of nuclear shortage France was always asked to come to the rescue.

Slivyak noted that many German experts have said there is more than enough renewable energy to compensate for energy losses once Germany’s last reactor is shut down, and who say that renewables could account for 30 percent or more of the country’s energy needs.

“Of course, Germany will have to work very hard to achieve a renewable future where nuclear power is not produced or imported,” Slivyak said. “But the opportunity exists – now it depends on the present and future German governments taking the right steps.”

The nuclear-produced electricity imports from France beg the question of whether Germany is simply displacing the nuclear problem from its own soil to that of its neighbor.

But Bellona’s Bøhmer said it would be naïve to expect that some transitional nuclear power from France would not be required. He warned however that, “the German government must see this as an intermediate and not a permanent solution.”

“French nuclear power must not become a sleeping pill that numbs further efforts to get Germany onto an economy of cheap and safe renewable energy,” said Bøhmer.