Published on August 2, 2011 by Charles Digges 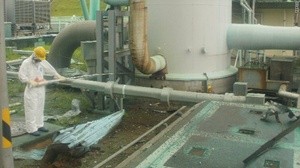 Rice – Japan’s staple food product – is also at threat, and authorities in 14 prefectures will be testing their rice harvests for possible caesium amid growing food-safety fears triggered by the nuclear accident, the Kyodo News agency reported.

This weekend, thousands turned out in Japan to protest government plans to bring reactors that have been shut down since the March 11 quake back online, and to demand Japan abandon nuclear power altogher. Many in the Japanese government still have faith in thier nuclear system and say that it is needed to make up for power shortfalls.

But the Japanese government is only now beginning to release data withheld since April concerning contamination dangers to technicians who are working to bring the crisis to heel.

A newly released document obtained by Bellona Web, says the Japanese government estimated in April that some 1600 workers will be exposed to high levels of radiation in the course of handling the reactor meltdowns at the stricken nuclear power plant.

The figure was released in a document from the Ministry of Economy, Trade and Industry (METI), which is in charge of regulating Japan’s nuclear industry, after the Japan Occupational Safety and Health Resource Center requested the information be made public, according an article published on Thursday in the Mainichi Daily News.

The April 25th document expressed concern for workers at other plants in Japan as well: If this many nuclear workers face such high exposure, they may be not be able to legally work at other nuclear plants in the coming year.

The radiation spike at Fukushima Daiichi

The lethal radiation was found at the bottom of a ventilation tower.

The power company immediately cordoned off the area and is currently investigating the cause of the high radiation and how it will affect the recovery work at the plant, Tsunoda said.

The radiation levels – 10,000 millisieverts per hour – are high enough that a single 60-minute dose would be fatal to humans within weeks, an ex-Japanese government official, who asked to remain anonymous, told Bellona Web.

The flooding knocked out the cooling systems for the three operating reactors and their associated spent fuel pools, causing the reacttors to overheat and hydrogen gas explosions that blew apart the building housing reactors No. 1 and 3.

Japanese officials – who have drawn growing and more vociferous criticism throughout the crisis for revealing inaccurate figures, withholding information and downplaying radiation threats – finally admitted months after the disaster that reactor Nos 1 and 3 had already gone into full core meltdown within the first three days of the crisis.

Another hydrogen blast is believed to have damaged the inside of reactor No 2, while engineers are struggling to manage an estimated 100,000 tons of highly contaminated water that was used to cool the reactors during the emergency.

Japan’s minister for liquidating nuclear emergencies, Gosi Hosono, said that clean up efforts in the 20 kilometer evacuation zone around the plant – which was imposed by the government with much delay in the days following the tsunami – will begin in September.

Other governments urged that the evacuation zone be extended to 70 kilometres, and both the United States and Norway urged its citizens to follow the 70 kilometre directive.

The failure of primary cooling systems when external power to the plant was crippled, and the failure of back up cooling when corroded diesel generators flickered out as water inundated the place necessitated emergency efforts to cool the reactors and spent fuel storage pools by any means necessary.

This meant involved blasting the reactors with water cannons and dropping hundreds of thousands of gallons of seawater from helicopters with questionable accuracy. The introduction of seawater, which is corrosive, was on of several last-ditch other efforts as it destroyed the reactors for further use.

But the water build-up has created other problems, including highly radioactive released into the sea and possible contamination of ground water.

The plant was forced in May to dump several thousands of tons of radioactive water into the Pacific, raising the ire of fishermen and the governments of South Korea and China.

TEPCO projects the situation won’t be fully over until sometime between October and January. The disaster has caused Japan to rethink its commitment to nuclear energy, and Germany has since announced plans to abandon atomic power entirely by 2022, folled by Switzerland, which will complete a nuclear phase out by 2035. Italy in June voted overwhelmingly in a popular referendum against beginning a nuclear power program by 95 percent.