Highly contaminated radioactive water that leaked into the sea in early May from a pit near a seawater intake of the reactor No 3 reactor at the Fukushima Daiichi nuclear plant totaled 250 tons and contained an estimated 20 terabecquerels of radioactive substances, Tokyo Electric Power Co (TEPCO) said over the weekend – nearly two weeks after the discovery. 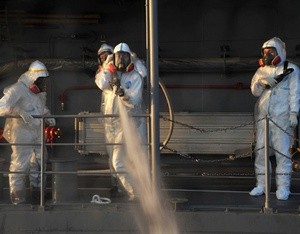 Meanwhile anti-nuclear protests swept through Switzerland and Germany made announcements about scaling back its nuclear energy use and abandoning it altogether by 2022.

Germany’s Siemens is apparently following suit, according to anonymous sources, and will be charting a path out of the nuclear reactor construction business, a backbone of the company’s balance sheet for years. The turnabout will mean a heavy blow to Russia’s state nuclear corporation Rosatom, which had signed a deal with Siemens to become a joint nuclear giant.

The leak at reactor No 3 contained radioactivity that is 100 times over Japan’s legal limit. TEPCO said the leak discovered on May 11 at a storage pit outside the reactor and that it had started in the early hours of the previous day and lasted for 41 hours, releasing 250 cubic metres of contaminated water into the sea.

An estimated 20 terabecquerels of radioactive material escaped as a result, a company spokesman told a news conference.

It was the second such reported leak of radioactive water. The first occurred at reactor No 2 and was only discovered in early April by workers seeking to determine the source of high radiation readings.

The leak at reactor No 3 raised the concentration of radioactive substances within the port of the power plant, but the level outside the port did not change significantly, TEPCO said.

The company reported these new findings to the Japanese Nuclear and Industrial Safety Agency  (NISA) late on Friday. It also said the leak had been plugged with cement and other substances on May 11.

Calls to TEPCO by Bellona Web on Monday to determine why the company had waited so long to release the information yielded no comment from company spokesmen.

Both TEPCO and the Japanese government have promised in the face of repeated criticism to release information in a more timely fashion, but both continue to lag behind events.

Water leaks have been a major headache for technicians struggling to bring Fukushima Daiichi’s overheated reactors under control. Immediately following the quake, and for weeks thereafter, workers were forces to inundate overheating reactors and spent nuclear fuel pools with hundreds of thousands of tons of sea water because all of the plants primary and backup cooling systems were disables by the tsunami.

The excess water, now highly irradiated, has gathered in reactor buildings and will, according to Bellona nuclear physicist Nils Bøhmer, continue to plague efforts to contain radioactivity at the plant.

Meanwhile, a large artificial floating island, which is capable of storing about 10,000 tons of water inside, berthed along the quay near the Fukushima plant Saturday morning, the Japan Times reported.

The 136-meter-long, 46-meter-wide ‘‘megafloat’’ will be used to store low contaminated radioactive water that has been decontaminated.

The announcement of the new leak came amid massive protests in Switzerlan and surprising developments at Germany’s Siemens, one of the worlds largest nuclear power plant engineering firms: The nuclear giant has decided in the wake of the Fukushima disaster that it will back out of nuclear power plant construction because of the nuclear market’s tarnished potential, anonymous sources with the company the Handelsblatt newspaper.

Siemens, which originally planned to become the market leader in atomic power along with Russia’s Rosatom, is struggling with its about-face as snubbing its partner may lead to negative effects on the company’s business in Russia, the newspaper said.

The two companies signed a memorandum of understanding in March 2009 on a proposed nuclear energy joint venture that would encompass everything from fuel fabrication to the decommissioning of nuclear power plants.

Rosatom officials reached by Bellona Web on Monday said they refused to comment on “baseless rumors from anonymous sources.”

Speaking in the southern German town of Andechs, German Chancellor Angela Merkel – whose government has presided over one of the world’s most comprehensive rethinks of nuclear power since Fukushima Daiichi – said 2022 was “a good time” for Germany to end nuclear power, backing a proposal by the Bavarian wing of her party, according to Agency France Presse.

Following the earthquake and tsunami which destroyed Fukushima Daiichi in March, Merkel ordered the closure for three months of Germany’s seven oldest reactors.

She also announced a moratorium for the same period of an earlier decision by her government to extend the lifetime of Germany’s 17 reactors by an average of 12 years, and ordered safety checks on all reactors and asked a commission chaired by a former environment minister to make recommendations for the industry.

Nuclear power is enormously unpopular in Germany, so Merkel’s turnabout on nuclear power will reap political as well as environmental gold stars.

As of Saturday, only four of Germany’s plants were online due to the moratorium and maintenance operations, Sueddeutsche Zeitung newspaper reported.

In Switzerland, some 20,000 people took part in xanti-nuclear demonstrations in the country’s north on Sunday ahead of a government decision on the nations future use of atomic energy, according to police and activists’ estimates cited by news agencies.

“These thousands of people who have come are sending a strong signal to the Swiss authorities,” she said.

The group said protesters had also come from Germany, Austria and France.

During the march, demonstrators held banners with slogans like: “No thanks to nuclear,” various news agencies reported.

The Swiss government is set to decide Wednesday whether to mothball the country’s five nuclear power plants.