Japan was preparing to expand the evacuation zone around earthquake-stricken Fukushima Daiichi nuclear power plant over concerns about long-term exposure to radiation, as three power aftershocks jolted northeast Japan within 10 minutes of one another, news reports said. 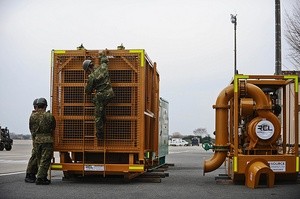 The epicenter of the 7.1 magnitude aftershock that hit at 5:16 pm local time were in the sea off the coast of Fukushima prefecture six miles underground, Japan’s Meteorological Agency reported. A magnitude 6.0 quake hit a minute later in the same area, followed by another – a magnitude 5.6 temblor – nine minutes after that.

The first of the jolts trapped people in homes and vehicles, killed at least two people, one a 16-year-old girl, and set off a tsunami warning. The Jolts were felts as far away as Tokyo, 240 kilometers to the south.

The aftershocks also knocked out cooling efforts at the Fukushima Daiichi plant for almost an hour, where four of the six reactors at the plant continue to be sprayed by water cannons.

The jolts underscore the vulnerability of the battle to keep the reactors at manageable temperatures, which has been the central activity of rescue workers since March 11 when a 9.0 magnitude earthquake and 15 meter tsunami knocked out all power and back up power to cooling units at the plants six reactors exactly one month ago.

What has ensued since then is nothing less than an Chernobyl  level catastrophe in slow motion: partial fuel meltdowns and core ruptures have hit at least two reactors; two reactor buildings have exploded from hydrogen pressure build ups and workers are struggling to prevent a third; a spent fuel storage pool has all but evaporated, emitting giant doses of radiation into the atmosphere; food and drinking water have been contaminated; tens of thousands of tons of radioactive water have been dumped into the sea, and radiation has been measured in the air across the northern hemisphere.

On Monday, Chief Cabinet Secretary Yukio Edano said the government would expand a 20 kilometer radius evacuation area near the nuclear plant that would target specific communities within 30 kilometers – but not the entire area

He also added that many of the communities within that area would not be asked to evacuate immediately.

“We took into consideration the impact of radioactive materials on the assumption that people continue living in these affected areas for six months to one year,” he said in televised remarks.

The new targeted evacuation announced on Monday was spurred by new government data showing high readings of radiation in certain hot spots beyond the 20-kilometer zone, emphasising how difficult it has been to predict the ways radiation has spread from the damaged plant.

Instead of spreading in even circles from the plant, the radiation has been directed to some areas and not others by weather patterns and the terrain.

But some areas that will soon be evacuated, said Edano, lie outside the new 30-kilometer radius.

Iitate, one of the communities told on Monday to prepare for evacuation, lies well beyond the 30-kilometer radius, but the winds over the last month have tended to blow northwest from the Fukushima plant toward Iitate, which may explain why high readings were detected there.

Evacuation orders will also come within a month for Katsurao, Namie, and parts of Minamisoma and Kawamata, Edano said.

People in five other areas may also be told to evacuate if there is a worsening of the crisis at the Fukushima Daiichi station, Edano said. Those areas are Hirono, Naraha, Kawauchi, Tamura and other sections of Minamisoma.

“This measure is not an order for you to evacuate or take actions immediately,” he said in his remarks. “We arrived at this decision by taking into account the risks of remaining in the area in the long term,” he added, appealing for calm.

The fear is that these areas are being exposed to radiation equivalent to at least 20 millisieverts a year, Edano said, which could be harmful to human health over the long term.

Edano said that pregnant women, children and hospital patients should stay out of the 30-kilometer radius, and that schools in that zone would remain closed.

Some government critics have complained for weeks that the evacuation zone is too small. The US government, for example, urged American nationals living inside an 80 kilometer radius to leave the area. The International Atomic Energy Agency has also urged Japan to widen the evacuation zone.

Some 168 Japanese environmental organizations have appealed to the government to widen the evacuation radius to at least 40 kilometers, said Ecodefence in its blog on the crisis.

Bøhmer agreed that the 20 kilometer evacuation zone should be extended by at least 10 kilometres, but noted that the sheer chaos that has been visited on Japan by just the earthquake and tsunami would make extending the evacuation zone impossible.

“Were Japan dealing only with human displacement from the nuclear event, we would call for a much more robust evacuation zone, but the government needs to tend to everyone,” he said.

Monday’s aftershock again knocked out the external power supply to the Fukushima Daiichi plant, temporarily stopping pumps there from sending cooling water into the facility’s three most severely damaged reactors, according to Japan’s nuclear regulator. The tsunami warning also obliged workers at the plant to evacuate temporarily.

Using emergency pumps to cool the nuclear fuel rods within the reactors and in spent-fuel pools above the reactors has been a top priority for the operator of the plant, Tokyo Electric Power Co (TEPCO), since the March 11 quake and tsunami damaged the reactors’ usual circulation systems. But Monday’s aftershock appeared to have exposed a big vulnerability in that approach.

The backup power and pumping systems that have been brought to the plant since March 11, including emergency diesel generators, fire trucks on standby and other generator trucks — all require workers to operate them manually, according to the Nuclear and Industrial Safety Agency. That makes them useless when workers must evacuate away from the reactors.

Hidehiko Nishiyama, deputy director-general of the Nuclear and Industrial Safety Agency, Japan’s nuclear watchdog, acknowledged the lack of an automatic backup power supply, but did not offer any solutions, according to the New York Times.