Officials with Tokyo Electrical Power Co, (TEPCO) again said they plan today to stop dumping radioactive water into the sea, a promise they have been issuing since Saturday in an effort to assuage protests from China and other surrounding nations fretting over rising radiation levels in their water. 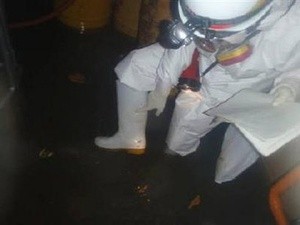 TEPCO is struggling to contain the worst atomic crisis since Chernobyl, with its engineers pumping low-level radioactive seawater, used to cool overheated fuel rods, back into the sea for the past six days due to a lack of storage capacity.

Engineers say they are far from in control of the damaged reactors and it could take months to stabilise them and years to clear up the toxic mess left behind. This was an assessment that Bellona physicist Nils Bøhmer agreed with.

TEPCO has been pumping sea water into the Fukushima Daiichi’s six reactor using a variety of methods including water drops from helicopters and police riot control water cannons on the ground to cool their nuclear cores since the March 11 quake and tsunami knocked out power and back up power to their cooling units, and then discharging the water, after it has become contaminated, back into the Pacific Ocean.

The enormous inundation has caused pools of highly contaminated water in reactor, and last week, a leak of highly radioactive water into the sea from reactor No 2 that had presumably been gushing since efforts to cool the plant had begun, was discovered and plugged.

Both Bellona’s Bøhmer and Japanese nuclear and government officials warned at that time that the plug of the leaking shaft in reactor No 2 would cause more flooding in the reactor and other areas. According to reports from Kyodo news agency on Sunday, the level of water in the shaft, which was 2 centimeters over normal after the leak was plugged, was now 10 centimeters over normal.

TEPCO has also been pumping nitrogen into the reactors to cool the cores in an effort to avoid repeats of the hydrogen explosions at reactor Nos 1, 2 and 3 last month, but officials say they are unsure of what to do next.

“We cannot say what the outlook is for the next stage,” a deputy director-general of the Nuclear and Industrial Safety Agency (NISA) Hidehiko Nishiyama said on Sunday. “As soon as possible we would like to achieve stable cooling and set a course towards controlling radiation.”

But the government has said it was too early to have a “specific road map” for ending the nuclear crisis.

It was first suggested by TEPCO that they could stop the water dumps – which they insist are of relatively low radiation levels – by Saturday, and endeavor to redirect the outpouring of irradiated water from overheated reactors to Fukushima Daiichi’s waste treatment facility, whose water was also drained into the sea.

Workers plan to use the space in the waste treatment facility to store highly radioactive water that is collecting in the basement of the No.2 reactor building, a key hurdle in efforts to contain a crisis at the plant that will soon enter its second month.

Saturday’s efforts to end dumping radioactive water were interrupted by powerful earthquake aftershocks that occurred on Thursday, endangering back up cooling systems at another nuclear power plant in Japan, and the drive to suspend the water dumps were then pushed back to Sunday – a goal they failed to meet.

“We have previously said it’s absolutely safe […] but in light of this experience, we need to review everything to ensure safety without being bound by precedents,” NISA’s Nishiyama said.

As to ending the water dumps that have been protested by South Korea and China, a TEPCO spokesman said late Sunday that: “We are making checks on remaining water, and the final check is scheduled for tomorrow.”

Bellona’s Bøhmer has voiced skepticism that the water dumps will be stopped any time soon. He also noted that the plugged leak of highly radioactive water into the sea measuring some 1000 millisieverts from reactor No 2 will also be another headache that will have to be revisited.

Bøhmer has also pointed out that any faith that radioactivity will not be harmful to fish and other sea life is both physically impossible and that the psychological view of Japan’s fishing industry will cripple it for years.

Overall, he predicts that it will take months to bring the smoldering issues at Fukushima Daiichi to heel.

Several countries have restricted food imports from Japan over radiation fears as Japan’s economy reels from the country’s worst disaster since World War Two. Disruptions to Japanese supply chains are reverberating around the world.

China will ban imports of farm produce, including food and feedstuff, from 12 areas in Japan, the official Xinhua news agency said on Saturday. It did not identify the 12 areas.

China said earlier it had detected 10 cases of ships, aircraft or cargo arriving from Japan with higher than normal levels of radiation since mid-March.

Xinhua reported earlier that trace levels of radioactivity had been detected in 22 Chinese provinces.

On Friday, China said it would closely monitor Japan’s actions to regain control of the plant and demanded Tokyo provide swift and accurate information on the crisis.

South Korea has also criticised Japan, accusing it of incompetence for failing to notify its neighbours that it would pump radioactive water into the sea.

On Saturday, TEPCO began installing a steel barrier at the crippled nuclear plant to prevent highly radioactive water from leaking into the Pacific Ocean.

After workers sealed the leak at reactor No 2, TEPCO said it was taking extra precautionary measures by installing steel sheets in the ocean nearby to block a seawater intake pipe. The company also plans to deploy “silt fence” barriers around the pipe to further guard against contamination.

Radiation from Japan spread around the entire northern hemisphere in the first two weeks of the nuclear crisis, according to the Vienna-based Preparatory Commission for the Comprehensive Nuclear-Test-Ban Treaty Organisation (CTBTO).

CTBTO’s 30 monitoring stations detected minute levels of radiation in North America after three days, in Europe after 12 days and the entire northern hemisphere after 15 days. Though governments worldwide have been quick to brand these radiation spreads as harmless, environmentalists contend that radioactive particles, once inhaled, cause cancer. They also contend that radiation detection devices determine only how much radiation is in the air, not how many radioactive particles are present in any given measurement.

In Tokyo, around 5,000 people took to the streets in two separate anti-nuclear protests on Sunday, news agencies reported. Some carried placards reading ‘No More Fukushima’ and ‘No Nukes’; others danced and played musical instruments.

One group of demonstrators marched to the offices of the operator of the stricken plant, which has apologised to Japan, and neighbouring countries, for the crisis.