As all but essential workers have been pulled from battling the rising temperatures at Japan’s Fukushima Daiichi nuclear power plant’s No. 2 reactor, which suffered a strong explosion in Tuesday’s early morning hours, Prime Minister Naoto Kan said radiation was already spreading and said there was “a very high risk” of further leakage. 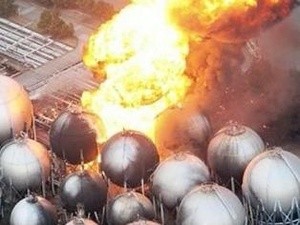 The International Atomic Energy Agency and environmental organisations also reported that a storage pool for spent nuclear fuel at the plant was also ablaze, according to the Russian environmental group Ecodefence.

The sudden turn of events, after a hydrogen explosion Monday at the plutonium fuel-based No. 3 reactor, the early-morning explosion Tuesday at the No. 2 reactor — the third in four days at the plant — and the burning spent nuclear storage facility have already made the crisis at the 40-year-old plant the worst nuclear accident since the Chernobyl reactor disaster a quarter century ago.

Officials now fear that the latest explosion, which came about 6:15 am Japan time at the most damaged and embattled of the reactors, may have finally ruptured the reactor core, which will lead to wide scale radiation spread and possible a partial to full core meltdown.

The latest explosion diminished hopes earlier in the day that engineers at the plant, working at tremendous personal risk, might yet succeed in cooling down reactor No. 2 by pumping in seawater.

According to information from the Nuclear Information Resource Center, with a reference to Japan’s NHK Television, some 2.5 metres of fuel are fully exposed within the core of the reactor.

“We now have all six reactors at the plant in a coolant crisis,” said Bøhmer. If the worst occurs “the local situation will be Chernobyl like,” said Bøhmer, adding, “the situation is much more serious today than it was yesterday.”

Bøhmer said that all cooling water — at this point seawater mixed with boron, a chemical that retards nuclear reactions — has been used up, which essentially leaves it in the same situation that reactor No. 2 was in yesterday.

He said that water levels in the remaining pumps at the other reactors were critically low.

Ecodefence reported that yesterday’s explosion at the No. 3 reactor, which runs on mixed uranium and plutonium oxide, or MOX fuel, likely released plutonium into the environment.

There are only a handful people to battle the ever-mounting crisis, compared to yesterday.

According to government statements, most of the 800 workers at the plant had been withdrawn, leaving 50 or so workers in a desperate effort to keep the cores of three stricken reactors cooled with seawater pumped by firefighting equipment, while crews battled to put out the fire at the No. 4 reactor, which Bellona’s Bøhmer said they had done just after noon Japan time on Tuesday.

An ex-government official in Tokyo who has been speaking anonymously with Bellona Web throughout the crisis said Tuesday that “the government is basically trying to avoid a coup by saying that whatever [radiation] measurements they record are much higherthan normal conditions, but that they are amounts that will not immediately effect human health.”

He said the Japanese were suffering from a dearth of real information on how to respond to the growing crisis because Fukushima Daiichi’s operator, Tokyo Electric Power Co (TEPCO) “is only making announcements when something happens, and every time, they say it is not a serious incident.”

The government was only making problems worse, he said, by simply repeating TEPCO’s announcements and assurances, meaning that no one with direct knowledge of developments at the plant knows or will say what the population should do to protect itself.

“The amount of radiation is rising dramatically each time a new incident is announced, and each time they say it is nothing to fear,” wrote the source in an email interview from his apartment in Tokyo where he is taking shelter with his family.

“The real question that TEPCO cannot clearly provide an answer to is how much radiation is a real threat to human health,” he said.

Tokyo and its 13 million residents could be affected by the radiation now adrift, Bøhmer said, and both official government sources and the ex-government official said levels in the metropolis were elevated on Tuesday following the explosions at reactor No. 2 and the coolant pump at reactor No. 4.

Bøhmer noted however that forecasts for prevailing winds through tomorrow predict the winds will not blow inland from the plant but rather out to sea. US media have reported that the USS Ronald Reagan aircraft carrier has moved further out to sea Tuesday.

The Ronald Reagan earlier this week sailed through a cloud of radioactivity resulting from the hydrogen explosion at Fukushima Daiichi’s No. 1 reactor building. According to various reports, the crew was exposed to as much radiation as a person is exposed to in a month in one hour.

Japanese officials have extended the danger zone, warning residents within 30 km to evacuate or stay indoors. The government was advising people to put on long sleeve shirts and hats and put wet towels around window and door cracks.

Primitive as that may seem, Bøhmer said it was a good first response emergency measure to guard against radiation poisoning.

“If you are exposed to radiation, the long sleeve shirt and pants will cover exposed parts of your body, and you can take them off and throw them away,” he said. “In the end it’s good advice, aside from being the only advice the government can give people who are still trapped within 30 kilometres of the plant.”

The Japanese government had initially ordered 45,000 people to evacuate the zone surrounding the plant, which jumped precipitously on Sunday to 200,000. Despite this, only some 185,000 people are reported to have made the evacuation from the area expected to be most affected.

In the early morning hours of Tuesday, Japanese environmental organisatons reported shocking spikes in radiation levels around reactor No. 2 that soared to 3130 microsieverts per hour.

At that level, anyone in the reactors vicinity would receive in 20 minutes the amount of radiation a person can absorb in a year, the Russian environmental group Ecodefense said.