Some 50 remaining nuclear technicians struggling with cooling difficulties and fires at Fukushima Daiichi were temporarily forced back by spiking radiation levels thought to be emerging from a possible containment vessel at reactor No 3 – which burns a plutonium based fuel – in the second such apparent breach in as many days. 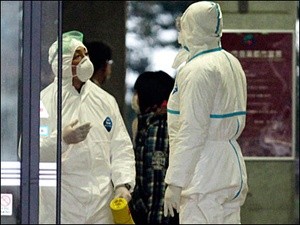 Since September, Fukushima Daiichi’s No 3 has been burning a mixed uranium and plutonium oxide fuel, or MOX.

Meanwhile, the situation with the plant’s No 5 reactor has become close to critical, Russia’s Ecodefence reported, citing Russia’s Radio Mayak.

According to experts with the Austrian Agency for Radiation Safety, the water level in the shut down reactor has retreated by 40 centimeters over the last several hours, Ecodefence said.

On Tuesday, Tokyo Electric Power Co (TEPCO) said that the suppression chamber – a water-filled tube at the bottom of the containment vessel that surrounds the nuclear core –  at the No 2 reactor might have been damaged by an explosion at the reactor earlier in the day.

Japanese Chief Cabinet Secretary Yukio Edano said the workers been “asked to withdraw to a safe area” and then were later allowed to return when radiation levels had dropped to what was thought a safe level, according to CNN.

Official reports said peak radiation doses of 6,400 micro-sieverts per hour – around 10,000 times normal background radiation – had been detected inside the plant. The reading fell back to about a third of that level within 20 to 30 minutes.

The technicians were allowed back into the main control room, which is thought to be radiation safe, after several hours.

The most recent spike in radiation “probably” occurred “because the containment vessel in reactor No. 3 has been damaged,” a spokesman for Japan’s nuclear safety agency later told reporters.

If similar problems have emerged at No 3, that means two of Fukushima Daiichi’s may be on the brink of – or already are – emitting massive doses of radiation.

“This makes a terrible situation even worse, because if technicians have to evacuate for longer and longer periods of time, then no one has any control over the reactors, and the reactors are controlling themselves,” said Bellona physicist Nils Bøhmer.

“The apparent rupture of the suppression chamber at reactor No 2 was bad enough. Since the containment vessel at the No 3 reactor has apparently ruptured, this is a next step toward a worst case scenario,” he said.

All six of Fukushima Daiichi’s reactors remain in crisis. Reactor No 4 was shut down and undergoing repairs when the 9.0 magnitude quake and 10 meter tsunami hit on Friday. No 6 and 7 were in cool shutdown and thought to pose no danger.

But all three of the dormant reactors are now reported to be heating up, so the coolant crisis is general across the plant, the world’s 25th largest.

Some 750 technicians working at Fukushima Daiichi to battle the effect of four hydrogen explosions, coolant failures at all six of Fukushima Daiichi’s reactor, exposed fuel rods in reactor core being inundated with seawater, and two spent nuclear fuel ponds on fire were asked by TEPCO yesterday to leave the site.

Since then, the 50 nameless technicians who remained behind as Japan’s last hope against the worst, have struggled to keep hundreds of litres of seawater a minute flowing through temporary fire pumps into reactor Nos 1, 2 and 3.

The technicians are being asked to make escalating and life threatening sacrifices. Japan’s Health Ministry said Tuesday it was raising the legal limit on the amount of radiation to which each worker could be exposed, to 250 millisieverts from 100 millisieverts, five times the maximum exposure permitted for American nuclear plant workers, said the New York Times

The change means that workers can now remain on site longer, the ministry said. “It would be unthinkable to raise it further than that, considering the health of the workers,” the health minister, Yoko Komiyama, said at a news conference. There was also a suggestion on Wednesday that more workers may be brought to help save the power station, the paper reported.

TEPCO has reported increased injuries among these remaining 50 technicians.

Five workers have died since the quake and 22 more have been injured for various reasons, while two are missing, said TEPCO according to various reports. One worker was hospitalized after suddenly grasping his chest and finding himself unable to stand, and another needed treatment after receiving a blast of radiation near a damaged reactor. Eleven workers were injured in a hydrogen explosion at reactor No. 3.

The remaining technicians’ tasks grow more onerous and life threatening, according to interviews in Japanese media. They crawl through mazes of tortured equipment in the pitch black listening for periodic explosions as hydrogen escaping from the hobbled reactors ignites as it comes into contact with air.

To add to their problems, a fire of unknown origin also broke out early Wednesday morning on the area of reactor No 4’s building. While it burned, radiation levels at the plant increased to about 167 times the average dose, the International Atomic Energy Agency said.

“What [the remaining technicians] are doing is pretty heroic, but the situation for them is not the same as at Chernobyl,” said Bøhmer. “At least here we have some system in place to evacuate and protect human life – perhaps they are even working in rotating shifts – but it’s pretty heroic.”

Authorities had discussed dumping seawater by helicopter onto the fire at the tank the spent fuel pond, or even boric acid, which retards nuclear reactions. Boric acid has been added as a component of the seawater technicians have been pumping into reactor to cool them down.

The helicopter plan was abandoned, however, because of high levels of radiation above the reactor, Kyodo news reported, citing Japan’s Ministry of Defence.

TEPCO ordered the technicians to retreat at about 10 a.m. in Japan. The radiation rise was detected after plumes of white vapour were seen pouring from what authorities identified as the station’s MOX burning No 3 reactor.

TEPCO and nuclear safety authorities said part of the reactor’s reinforced containment vessel might have been damaged, but this could not be verified first hand, given the position of the containment vessel inside reactor, which was damaged by a hydrogen explosion on Monday.

On Tuesday, vapour escaped from the plant’s No 2 reactor after an explosion in a water tank – possibly the suppression chamber – under its containment unit.

Nuclear authorities remain particularly concerned about this reactor because its fuel rods were at least partially exposed to the air for more than 14 hours, long enough for substantial melting to have occurred.

If any of the fuel pellets have melted, experts say, they would have dripped to the bottom of the containment vessel, where there is still a significant level of water. For the present, at least, that should prevent further melting.

TEPCO said an estimated 70 per cent of the nuclear fuel rods had been damaged in the No 1 reactor and 33 per cent at the No 2 reactor, the Financial Times reported.

The Financial Times also reported that some foreign embassies and multinational companies are evacuating staff from Japan as the crisis continues and that Lufthansa, Germany’s flagship airline, has halted flights to Tokyo.