For the first time in the two-week-old crisis at the Fukushima Daiichi plant, Japanese officials are admitting the possibility that the core of the quake-rocked plant’s plutonium-based fuel burning reactor No 3 has been damaged and is leaking large quantities of radiation, something many experts have suspected since the reactor suffered a hydrogen explosion on March 14. 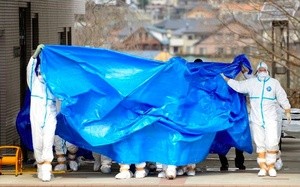 A somber Prime Minister Naoto Kan sounded a pessimistic note at a briefing hours after nuclear safety officials said they suspected a breach at the Fukushima Dai-ichi plant that would be a major setback in the urgent mission to stop the facility from leaking radiation.

“The situation today at the Fukushima Dai-ichi power plant is still very grave and serious. We must remain vigilant,” Kan said. “We are not in a position where we can be optimistic. We must treat every development with the utmost care.”

The uncertain situation halted work at the nuclear complex.

Other reports have emerged that Japan may raise the level of the accident at Fukushima Daiichi on the seven point International Nuclear Event Scale (INES) from its present rating of 5 to 6 – one notch below Chernobyl’s scale-topping level 7, which, according to the scale for Fukushima, implies “Significant release of radioactive material likely to require implementation of planned countermeasures” and “several deaths from radiation.”

Officials have not yet confirmed upgrading the accident. Another massive evacuation, this time for people living more than 20 kilometers from the plant also has mumblingly suggested by the government.

The burns came from standing in irradiated water, and officials say that such high concentrations of radiation, which measured 180 millisieverts, was beyond radiation expectations that would normally be found in water in reactor, and they drew the conclusion that more radiation than suspected must be leaking.

“It’s very possible that there has been some kind of leak at the No. 3 reactor,” Hidehiko Nishiyama, a spokesman for the Japan Nuclear and Industrial Safety Agency (NISA) said in Tokyo Friday, Bloomberg reported.

“Our data suggest the reactor retains certain containment functions,” he said, implying that the damage may have occurred in the reactor’s core but that it was limited

While radioactive water at the unit most likely escaped from the reactor core, it also could have originated from spent fuel pools stored atop the reactor, Nishiyama said, according to Bloomberg.

The development at reactor No 3, as described by Nishiyama, at the press conference raises the possibility that radiation from the mixed plutonium and uranium oxide, or MOX, fuel in the reactor could be released.

Workers have been seeking to keep reactor No 3 cool by spraying it with seawater along with a more recent effort to restart the reactor’s cooling system.

The three workers suffered burns from radiation levels 10,000 times higher than expected, Reuters reported, adding to fears that the containment vessel for nuclear fuel was cracked.

The workers were burned as the contaminated water poured over the tops of their boots, soaking their feet and ankles, the Asahi Shimbun newspaper reported, citing sources with the Tokyo Electric Power Co (TEPCO) the plant’s operator.

Two workers were taken to Fukushima Medical University Hospital and were expected to be transferred to the National Institute of Radiological Sciences in Chiba City. Hiro Hasegawa, a TEPCO spokesman, told the New York Times the third worker had not been hospitalized.

Another sign that the trouble may be more than can immediately be handled is the Japanese government’s quiet encouragement to people living in the 20 to 30 kilometer band around the hobbled plant to flee. People within a 20-kilometer radius of the plant were ordered to evacuate on March 15, while the other 10,000 people reported by NHK TV to still be in the outer ring were advised to remain indoors.

“We’re trying to quickly locate everyone who remains [within the 20 to 30kilometer radius], so that we can rapidly help in case the nuclear plant situation worsens,” a Land Self Defense Force official told NHK.

The United States has recommended that its citizens stay at least 80 kilometers away from the plant.

No one is being ordered to leave, and people may choose to remain, but many have already left of their own accord, tiring of the fear and tedium of remaining cooped up as the nuclear crisis simmers just a few kilometers away.

The chief cabinet secretary, Yukio Edano, said earlier on Friday in a televised news conference that the government would assist people who wished to leave the zone.

Levels of a radioactive isotope found in Tokyo’s water supply fell by more than half on Thursday, testing below the country’s stringent maximum for infants. The lower readings were made hours after Edano said the isotope, iodine 131, had been detected in the water supply of Kawaguchi City, just north of Tokyo, as well as in those of two of Tokyo’s neighboring prefectures, Chiba and Saitama. On Wednesday, the authorities cautioned those in the affected areas not to give infants tap water.

The problem is not likely to end soon; nuclear workers will have to keep venting radioactive gases from the damaged reactors, adding to the plume of emissions carried by winds and dispersed by rain. The public has been warned not to consume food and milk from the area near the plant.

On March 15, amid a siege from the media and other nations that they were not providing complete information, Japanese government officials said the suppression chamber – a water-filled tube at the bottom of the containment vessel that surrounds the nuclear core – had possible been damaged during a hydrogen pressure explosion that occurred at the plant earlier that day.

A TEPCO official told the New York Times that workers had managed to restore lighting in the central control room of Reactor No  1, an important step toward restarting its cooling system. The temperature in the reactor pressure vessel has been showing a worrisome increase, and. Edano said efforts were being focused on resolving the problem.