A former Fukushima Daiichi reactor designer turned whistle blower today said the crippled plant’s reactor No 4 had been relying on flawed steel to hold radiation in its core, and that he himself helped hide the defect when the reactor – which he called a “time bomb” – was built four decades ago. 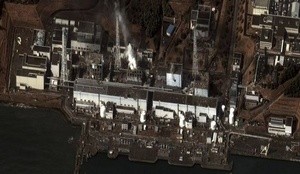 Three technicians meanwhile were rushed to hospital after receiving severe radiation burns, triggering a second evacuation of workers in as many days, as anxiety over the safety of Tokyo’s tap water persisted. Official readings indicated that radiation levels in the metropolis’s water had returned to “normal,” but that readings were coming back high for tap water in two neighboring prefectures, Chiba and Saitama.

The former reactor engineer, Mitsuhiko Tanaka, who says he turned his back on the nuclear industry after Chernobyl, told Japan Today that he had assisted in covering up the critical design flaw while working for a unit of Hitachi in 1974.

Reactor No 4 was shut down for maintenance when the catastrophic 9.0 scale earthquake and tsunami hit Japan on March 11, and disabled all of the Fukushima Daiichi plant’s reactor cooling systems.

Reactor No 4 has since suffered critic lacks of coolant in its open spent nuclear fuel storage pond which has been ablaze off again and on again since last week, releasing massive doses of radioactivity into the environment. Rescue workers resorted to bombing it with seawater dropped from helicopters with questionable success.

The revelations have deeper implications for the Japanese government, which, it was discovered earlier this week, had given a pass to Fukushima Daiichi’s 40-year-old reactor No 1 for a 10-year operational life span extension two weeks prior to the earthquake, despite several warnings from regulators pubished on the Japanese nuclear safety agency’s Website that it would not withstand an earthquake.

Of particular importance were discoveries by regulators that reactor No 1’s diesel-powered back-up power generators had sustained some 33 stress cracks, leaving them especially vulnerable to rain and seawater.

Yet regulators eventually capitulated to government wishes and granted the operational life span extension. Under pressure from the Japanese public, which is largely against new nuclear power build outs, the government finds it cheaper quieter to simply extend the operational lifespans of reactors already in service, said Bellona’s nuclear physicist Nils Bøhmer.

When the quake and tsunami – which measured 15 metres at the plant – hit, back up power to cool reactor No 1, as well as all other reactors, was lost in hours.

This issue, as well as the ones raised by Tanaka, are poised to take on iconic status in the pantheon of human error relative to nuclear power.

Tanaka’s condemnation reaches further than No 4

Earlier this week, Tanaka told the media more generally that all of the reactors at Fukushima Daiichi were outmoded and that specifically, reactor No 1 – which has suffered overheating difficulties, a partial meltdown and a hydrogen explosion – should have been shut down or replaced.

“It was about time the reactor was replaced,” Tanaka said earlier this week of reactor No 1. “The tsunami would have caused great damage, regardless. But the pipes, the machinery, the computers, the entire reactor — they are just old, and that did not help.”

He said that all six of Fukushima Daiichi’s reactors, 240 kilometres north of Tokyo, possessed suppression chambers that were too small, which increased the risk that pressure would build up within the reactor – which it did, particularly at Reactor Nos 1, 2 and 3 – causing pressure explosions and periodic released of built up radioactive gasses by technicians struggling to bring the reactors to heel.

“Who knows what would have happened if [the No 4] reactor had been running?” Tanaka, said in an interview last week, Japan Today reported.

“I have no idea if it could withstand an earthquake like this. It’s got a faulty reactor inside,” he said.

Tanaka originally brought his allegations before the Ministry of Economy, Trade and Industry in 1988, and he chronicled them in a 1990 book entitled “Why Nuclear Power is Dangerous.” The allegations have now resurfaced with particularly bitter resonance.

Hitachi spokesman Yuichi Izumisawa said the company met with Tanaka in 1988 to discuss the work he did to fix a dent in the vessel and concluded there was no safety problem.

“We have not revised our view since then,” Izumisawa told Japan Today.

Kenta Takahashi, an official at the Ministry of Economy Trade and industry’s Nuclear and Industrial Safety Agency, said he couldn’t confirm whether the agency’s predecessor, the Agency for Natural Resources and Energy, had conducted an investigation into Tanaka’s claims, said Japan Today. Naoki Tsunoda, a spokesman at Tokyo Electric Power Co (TEPCO) – the plant’s operator – said he couldn’t immediately comment.

Tanaka says the reactor pressure vessel inside the No. 4 reactor was damaged at a Babcock-Hitachi foundry in Kure, Hiroshima Prefecture, during the last step of a manufacturing process that took two and a half years and cost millions of dollars, Japan Today reported. If the mistake had been discovered, the company might have been bankrupted, Tananka said.

The origin of the flaw

Inside a blast furnace the size of a small airplane hanger, the reactor pressure vessel was being treated one last time to remove welding stress, according to Tanaka’s recounting.  The cylinder, 20 meters tall and 5.8 meters in diameter, was heated to more than 600 degrees, a temperature that softens metal.

Braces that were to have been placed inside during the blasting were either forgotten or fell over when the cylinder was wheeled into the furnace. After the vessel cooled, its walls were warped, Tanaka said.

Research models of radiation spread conducted by the European Committee on Radiation Risk predict that 120,000 worldwide are now at risk for contracting cancer as a result of the radiation still leaking from Fukushima Daiichi.

Today, three workers who had been working to restore electricity to Fukushima Daiichi’s battered reactor that runs on mixed plutonium and uranium oxide, or MOX, fuel were rushed to the hospital with burns on Wednesday from exposure to 180 milisieverts of radiation, TEPCO said in a statement. The Japanese health ministry last week reset the acceptable does of radiation for rescue workers at Fukushima Daiichi from 100 milisieverts to 250 milisieverts. The dose the workers received is therefore nearly twice what is considered “safe.”

The workers have since faced making nearly suicidal decisions while continuing to secure the reactors.

Officials from Japan’s nuclear safety agency said the three workers – two in their 20s and one in his 30s – suffered severe radiation burns while standing in irradiated water.

About two dozen workers have been injured since the plant began leaking radiation after suffering tsunami damage on March 11.