MOSCOW — What should be of concern to a country’s government when a neighbouring nation is grappling with an unprecedented and unrelenting crisis at a nuclear power plant, radiation releases, and massive forced evacuation? Two issues: Is the radiation going to reach its territory? And: Are accidents like these possible at nuclear power plants at home? During a meeting with emergency management and nuclear officials last Saturday, Russia’s Prime Minister Vladimir Putin only seemed concerned with the first question — it never got as far as how dangerous Russian nuclear power plants might be…

Published on March 15, 2011 by Andrey Ozharovsky, translated by Maria Kaminskaya 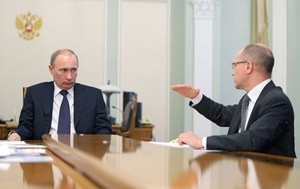 The problem is only with one reactor?

It is quite curious how Rosatom head Kiriyenko chose to report the latest developments at Fukushima Daiichi to the prime minister (English quotes are rendered here as per the translated transcript available on the Russian premier’s official website):

Sergei Kiriyenko: The problem is still only with one unit, but the other two also need to be monitored closely.

By the time Kiriyenko was reporting to Putin, updates about the developments at all three reactor units that had been in operation at Fukushima Daiichi at the time that the 8.9 scale earthquake and 10 metre high tsunamis hit the area last Friday — the reactors were shut down immediately, but then developed cooling problems — had been posted on the website of the operator company, Tokyo Electric Power Co (Tepco).

By Saturday evening, as the Japanese authorities and the operator company had reported, a hydrogen explosion rocked Reactor Unit 1 at Fukushima Daiichi, damaging the roof and walls of the reactor building. The reactor vessel had not sustained the damage, as evidenced by the absence of any large-scale release of plutonium or uranium from the plant. Levels of cooling water were falling dangerously, however, at Reactor Unit 2, and the high-pressure water supply system had failed at Reactor Unit 3. A pressure relief valve was opened manually at Unit 3 to release radioactive vapour into the atmosphere in order to reduce rising pressure in the reactor. Operators started to pump seawater into the cooling circuits of both Reactor Units 1 and 3 to cool the heated cores.

What Kiriyenko should have explained to Putin was that pumping seawater into the reactors — a safety procedure provided for in case of a severe accident scenario such as in progress at Fukushima Daiichi, though still a last-resort measure — meant effectively that the reactors would be done for as energy-producing sites. Nuclear power reactors use distilled desalinated water for cooling purposes, and the salty seawater renders a reactor useless in the future.

But Kiriyenko said nothing about these details to Putin — or was he himself not well enough informed?

On Monday, a second explosion caused by hydrogen build-up was reported to have occurred at Fukushima Daiichi, this one at the plutonium-burning Reactor 3, and early Tuesday two more explosions were reported at the plant, as well as a massive radiation leak caused by the burning on-site spent nuclear fuel storage facility. On Saturday, Kiriyenko was explaining to Putin just what had exploded and why at Reactor Unit 1 — a task he pulled off with flying colours.

Indeed, there was no going around the fact of the explosion and the damage it had done to the reactor building — images and footage of smoke billowing over the reactor roof were in heavy rotation in every major TV channel’s news updates at the time.

Still, before he went into the hydrogen explosion details, Kiriyenko’s presentation took a strange turn:

Sergei Kiriyenko: These are so-called boiling water reactors. Mr Putin, Russia has no such reactors, operating in a single mode: instead of two circuits, like at our stations, [the reactors at Fukushima Daiichi] have one circuit. It is essential to ensure water supply to cool the core. […]

Vladimir Putin: Clearly, this is different kind of reactor, and we don’t have any like it. […]

Quite right. Yes, technically, Putin is correct: Russia does have no such reactors. But we do have reactors of similar design — and more dangerous, at that.

It would be nice to remind Kiriyenko that eleven single-circuit boiling-water reactors are in operation in Russia. Unlike the Japanese reactors, these are models that use both water for cooling and graphite to moderate nuclear reaction in the core — something that would make an accident at such a reactor much less manageable and far more severe… Yes, these are the RBMK-1000s of Chernobyl infamy, still in operation at Leningrad, Kursk, and Smolensk Nuclear Power Plants.

PR in place of information

This successfully set the propagandist tone of Kiriyenko’s report to Putin, and it’s not for nothing that segments from this meeting were aired time and again during news broadcasts on the country’s national TV channels last Saturday. The objective was to let the prime minister — and the country — believe that the Japanese use some sort of reactor that we in Russia do not have, so basically, we have no need to worry about accidents or prepare for them.

Ignoring a danger that is becoming so real and tangible as the nuclear crisis unfolding in Japan — a danger that hit home once, in 1986, and may just repeat itself now — and making no contingency plans in terms of effectively protecting and evacuating the population in case of a nuclear or radiation disaster, this — not the nuclear reactor designs — is where Russia is so different from Japan, where the authorities have been soberly assessing the developing situation and making swift evacuation decisions as the crisis has been aggravating at the ailing plant.

Radiation levels “below the norm”

The prime minister revealed a somewhat strange take on radiation in one of his remarks during the meeting:

Vladimir Putin: […] I have just talked with the leaders of the Far Eastern regions of Russia. The situation there is normal, both in terms of evacuating people [if necessary] and in terms of background radiation. The governor of Sakhalin […] has reported to me that it is [normal] everywhere, and in some areas even below the norm.

It’s not quite clear if something needs to be done if background radiation is below the norm. Wait until westbound winds bring a radioactive cloud into the Russian territory?

What is the big deal?

As journalists rush to interview experts and officials to make sense of the situation at Fukushima Daiichi for the public’s benefit, comments and assessments can be frequently heard on TV and radio waves exemplifying a carefree attitude to radiation and the dangers of nuclear power that is so characteristic for official sources in Russia. One example is an interview Rafael Arutyunyan, deputy director of the Russian Academy of Sciences’ Institute for Atomic Power Safe Development Research (Nuclear Safety Institute) gave to the tabloid Russian TV channel NTV:

“All those new Chernobyls, those catastrophic scenarios that imply a real — not a mythical — threat to human health, so to speak, nothing of the sort is happening there, of course. Although the situation there is clearly a difficult one, these are extraordinary circumstances.”

He continued: “It is, of course, a difficult task, ensuring a stable situation at the plant. A release [of radiation] is possible if there proves to be insufficient cooling. But the way it goes, immediately, here, is — if there’s a [radiation] release, then it’s like, it’s the end. What is the big deal? So what if there’s a release [of radiation]? So there’ll be additional exposure doses. But we are not talking about doses that pose a threat to health, of course.”

As Arutyunyan was saying this, 80,000 people were being evacuated from the potential contamination zone within the 20-kilometre radius of Fukushima Daiichi. In the days to come, this figure would reach 140,000 and then 210,000, and news agencies around the world would post pictures of radiation safety workers checking residents’ exposure levels.

It’s easy to understand that the goal pursued by Arutyunyan, Kiriyenko, and Putin is to convince everyone that reactors capable of poisoning the environment and people around with radiation discharges can only be found in Japan — Russia has no such threat to worry about. This is easily done, too — say as little as possible about both potential and developing dangers and the ongoing evacuation, filter media reports against any hint of criticism of the nuclear power industry, lie about single-mode boiling-water reactors in operation in Russia — and top it off with nuclear experts shrugging their shoulders on national TV. Indeed, what is the big deal?