The alarming developments at Fukushima Daiichi Nuclear Power Plant, where efforts are ongoing to quell the overheated reactor cores and prevent a mass-scale meltdown that threatens radiation release of Chernobyl proportions, bring home the poignancy of the risks and dangers of nuclear energy. Bellona, as before, continues to assert that no safe reactors exist in the world – and hopes the tragedy unfolding in Japan serves as a powerful, if regrettable, lesson. 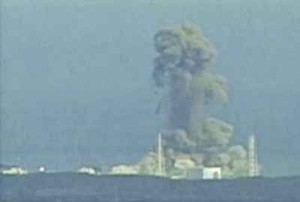 As of Tuesday, March 15, contradictory reports are coming from Japan on radiation levels around the embattled plant, but all six of the plant’s reactor units are reported to be experiencing continuous coolant failures following the powerful earthquake and 10-metre-high tsunami waves last Friday, which destroyed the regular cooling system at the plant. Four explosions have occurred at the plant in the four days since the earthquake, and a fire has also been reported at an on-site spent nuclear fuel storage pond, threatening a further risk of radiation leak.

Each of the Japanese plant’s six reactors – of which three were in operation at the time the natural disaster hit and were shut down immediately – has four safety barriers meant to contain a spread of radiation. The first one is provided by the zirconium claddings of the nuclear fuel rods; the second is the reactor vessel; the third and fourth ones are the internal and external containment buildings – the former representing a steel-and-concrete protective shield and the latter being the actual building housing the reactor unit. As of March 14, the hydrogen explosions at Reactor Units 1 and 3 led to partial damage of the reactor buildings – thus destroying the fourth safety barrier – and the developments of early morning of March 15 may have, according to as-yet unofficial reports, resulted in an internal containment breach

Further failure to supply enough cooling water to the distressed reactor cores at Fukushima Daiichi, where temperatures are holding at a level of 2,200 degrees Celsius, will lead to the melting and destruction of the fuel rod claddings – thus resulting in a breach of the first containment barrier. Temperature and pressure will both continue to rise uncontrollably inside the reactor core at this point, which may lead to a loss of integrity of the reactor vessel. Should melting occur in the body of the reactor vessel – which is the second, and main, safety barrier – causing it to cease to be hermetic, the highly radioactive fission products will start filling the internal containment barrier. In order to prevent an explosion or loss of integrity in the internal containment, pressure needs to be decreased by letting vapour and other substances, including highly radioactive ones, escape beyond this last safety barrier.

The situation may be further aggravated by the fact that Reactor 3 at Fukushima Daiichi ran on mixed uranium and plutonium (MOX) fuel, and fission products generated by MOX fuel are much more dangerous than those produced during the burning of uranium fuel.

A breach of the internal containment barrier will effectively make the situation at Fukushima Daiichi an uncontrollable one.

Should a worst-case scenario develop at the Japanese plant, the bulk of the radioactive fallout will without doubt hit the territory of Japan and the waters of the surrounding seas and the Pacific Ocean. Much will depend on the direction and force of winds in the area. There is a perceivable risk that the West Coast of the United States may be affected by airborne radioactive fallout carried by jet stream winds blowing in the direction of the US across the Pacific Ocean. The US Western Seaboard may see measurable levels of radiation, though they will unlikely be dangerous to human health. However, as the experience of the Chernobyl tragedy tells us – the radioactive cloud that spread from the plant’s fourth reactor as a result of the 1986 explosion covered most of the northern hemisphere – a large-scale release of radiation from the Japanese plant may result in a cloud of radiation reaching as far as the Eurasian continent, including the Far Eastern territory of Russia.

It is at this point difficult to predict the precise amounts of radioactivity or geographical pattern of the fallout should the worst occur at Fukushima Daiichi.

Consequences for the future of the global nuclear industry

Bellona’s assertion has been and continues to be that there are no safe nuclear reactors. Nuclear power has always been fraught with risks, and never since 1986 has it been made more evident than by the disaster still in progress at Fukushima Daiichi Nuclear Power Plant.

Bellona hopes that the tragic events in Japan will compel the global nuclear industry to reconsider going ahead with future programmes and the many new projects currently in development. In particular, Bellona hopes the Russian nuclear authorities will heed Fukushima’s lessons and rethink the idea of building floating nuclear power plants – a project of questionable benefits and undeniable risks.

Bellona expresses a firm belief that the bitter lessons of this crisis will not pass unnoticed by the world’s nuclear industry and that, having assessed the immense risks to human health and the environment, world governments will turn their attention to renewable sources of energy, making a conscious choice to abandon a technology that threatens irreparable damage to the environment and irretrievable loss of life.