Bellona’s Nikitin: After Fukushima, going ahead with floating nukes will be suicidal for Russia

Published on March 15, 2011 by Boris Vishnevsky, translated by Maria Kaminskaya 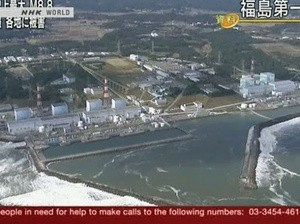 Alexander Konstantinovich, everyone’s attention is riveted right now on the developments in Japan. How serious are the ecological consequences of the accident as of now, and what forecasts can you give based on current information?

The ecological consequences will depend strongly on how the situation develops further. Each reactor unit at Fukushima Daiichi has four safety barriers: The first is the claddings of the fuel rods, the second is the reactor vessel, the third is the steel-and-concrete internal containment vessel, and the fourth is the external containment, the actual building housing the reactor. As of 20:00 pm Moscow time on March 14, explosions at Reactor Units 1 and 3 of the plant partially destroyed the buildings of the reactors, meaning the fourth safety barrier was breached there.*

The worst-case scenario for further development of the emergency at Fukushima is as follows: A failure to supply sufficient cooling water to the distressed reactor cores, where temperatures are holding at a level of 2,200 degrees Celsius, will result in the melting and destruction of the fuel rod claddings, i.e. a breach of the first safety barrier. Furthermore, temperature and pressure inside the core will continue to rise uncontrollably, which may damage the integrity of the reactor vessel.

As the reactor vessel experiences melting and a loss of integrity – and it is the second and main safety barrier – the highly radioactive fission products in the core will start filling the internal containment barrier. In order to prevent an explosion or a breach of the internal containment, pressure will need to be decreased by letting vapour and other products, including highly radioactive ones, escape beyond the internal containment, the last safety barrier. The situation may be aggravated by the fact that one of the reactor units at Fukushima runs on mixed uranium and plutonium (MOX) fuel, which produces much more dangerous fission products than those generated by uranium fuel.

How likely is radioactive contamination as a result of such a scenario?

The worst-case scenario will without doubt lead to the bulk of radioactive particles falling out on the territory of Japan and the waters of the surrounding seas and the Pacific Ocean. Much will depend on the direction and force of winds in the area. But, as the experience of Chernobyl tells us – the radioactive cloud then covered most of the northern hemisphere – in case of a large discharge of radiation from the Japanese plants, the radioactive cloud may reach the continent.

How can Russia be affected by what is happening in Japan? Should we start stocking up on iodine and Geiger counters?

As I said before, a large discharge of radiation may, depending on wind conditions, result in a radioactive cloud covering part of the Russian territory. It is difficult at this point to predict exact radioactivity levels or geographical pattern of a fallout, but this risk must not be ruled out.

Do you believe that building and operating nuclear power sites is possible at all in regions with such a high seismic hazard?

To be sure, if we are smart about it, if we want to use nuclear power at all, we will of course need to choose the safest locations. Although, changes in the environment have been happening very fast lately, and it’s become almost impossible to make the right guess, to predict which area will be safe and which won’t. But that nuclear power plants can’t be built and operated in earthquake-prone regions – that’s a fact.

Is a repetition of an accident like the one evolving at Fukushima Daiichi possible at Russia’s nuclear power plants? At Leningrad Nuclear Power Plant near St. Petersburg, for instance, or the new Baltic Nuclear Power Plant under construction in Kaliningrad?

It’s hard to draw an immediate analogy. Everyone had been saying that nothing like what happened at Chernobyl was ever possible. But we are seeing quite similar developments today. Of course, there are different causes, and the scale is different, but what is unfolding in Japan is called a nuclear accident – just like what happened in Chernobyl. So an accident in Sosnovy Bor [at Leningrad Nuclear Power Plant] can happen, too. It’s just a matter of when and what will cause it. It’s like a car breaking down: It’s impossible to completely and reliably rule it out.

In light of what is going on in Japan, how dangerous are Russia’s plans to build floating nuclear power plants?

We hope that the first thing that Russia will do when the crisis in Japan has been resolved is abandon the idea of building floating nuclear power plants, which is an extremely dangerous project. We cannot keep pursuing this path. It’s a suicide.

How well protected is the Russian Far East against the consequences of an earthquake or tsunami? Should something happen – will our authorities be ready?

Should something happen, the Russian authorities will not be ready! I’ve had opportunity to check Russia’s military capacity for preparedness [to disasters of such scale]. And we have numerous examples: Chernobyl, the [August 2009] accident at Sayano-Shushenskaya [Hydropower Plant], the wildfires of the summer of 2010. Has there been just one time when the authorities were prepared to deal with a man-made catastrophe or a natural one? And the Far East is just as prone to earthquakes as Japan. There, too, natural disasters like the one in Japan may happen.

Why can’t we learn our lessons from Chernobyl and Sayano-Shushenskaya? A quarter of a century has passed since the Chernobyl accident – is safety assurance still at the same low level as it was then? If so, what is the reason? Negligence? Unprofessionalism? Believing blindly that nothing bad will happen until it hits home?

I think that today, many factors combine to contribute to this situation. It’s everything you listed plus we need to add greed – the pursuit of profit by any means necessary, even if the earning methods threaten someone’s life or health – and the sheer indifference of those who make the decisions toward those who can suffer gravely as a result.

*News updates as of late Tuesday, March 15, suggest the third safety barrier, the internal containment vessel, was apparently breached at Reactor Unit 2 at Fukushima Daiichi, further aggravating the situation at the plant. For more information, please follow Bellona’s ongonig coverage of the disaster.