Readings taken by an American over-flight kilometer area surrounding the embattled and overheating Fukushima Daiichi nuclear power plant show radiation has not spread beyond the 30 kilometer area around the plant, but questions remain about when electrical power will be hooked up to aid plant cooling mechanisms and why it hasn’t been sooner. 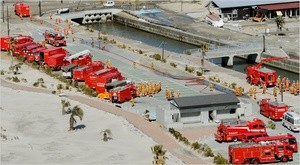 The Americans, however, have yet to release more specific findings.

The French Institute for Radiation Protection and Nuclear Safety, however, told Vladimir Slivyak, co-chair of the Russian environmental group Ecodefence, that the radiation released thus far is equal to one-tenth of that released by Chernobyl. According to Sliyak’s calculations in his most recent blog, the Japanese radiation release, therefore, equal 5 million Curies.

Japanese officials have also announced that they have upgraded events at the nuclear power plant to a “Level 5’ on the seven-point International Nuclear Event Scale (INES), which they had previously assessed at a four, the International Atomic Energy Agency said in a release. Level 5 corresponds on the scale to an “accident with wider consequences,” the equal of the 1979 near meltdown of the Three Mile Island nuclear plant. Japan’s previously issued level of 4 on the scale is an “accident with local consequences.”

General electrical failure at Fukushima Daiichi has been the underlying cause of most of the difficulties the plant has experienced. Alternating current (AC) electrical power for cooling pumps from power lines was lost as soon as last Friday’s 9.0 earthquake and 10-metre tsunami lashed the country’s northeast coasts. Within several hours, direct current (DC) batteries at the plant died, leaving technicians to scramble to cool all six of the plants reactors.

Workers have had to deal with one cooling related disaster after another from a suspected containment vessels rupture in reactor No 2 and 3, hydrogen explosions at reactor Nos 1, 3 and 4, battling the heating of fuel rods that are thought to be exposed, and on again, off again fires at an overcrowded spent fuel cooling pond at reactor 4 and other cooling pond drainages, steady heating in reactor Nos 5 and 6, which, like No 4, where in shutdown when the earthquake hit, but whose fuel still needs coolant.

Rescue workers continue to train their efforts on cooling what they say are exposed fuel roads at reactor No 3 as well as to cool the No 4 fuel pond with a battery of police riot control water canons and water drops from helicopters. As of yesterday, 30,000 tons of water had been pumped into reactor No 3 alone.

Bellona’s nuclear physicist Nils Bøhmer said that footage of Japans NHK television had show vapour coming out of the wrecked reactor building, indicating that water was making contact with the fuel rods, which is “a good sign.”

“The situation is not worse than yesterday, so it is stable,” said Bøhmer. “The work with dousing reactor No 3 is more focused, which has shown some reduction of radiation levels, and the electrical equipment is on site.”

Also on Friday, however, the International Atomic Energy Agency made it clear on its Website that there were no readings at all from some critical areas, the New York Times said.

Reports from Japan today indicate that the 1.5 kilometre line from the Tohoku Electric Power Co to be installed by the Tokyo Electric Power Co (TEPCO) is in place, but that workers have not been able to hook it up to the No 2 reactor yet because radiation remains excessive.

Bøhmer said that TEPCO reported today that other cables should be ready to be hooked up to reactor Nos 1 and 4 by Sunday.

Yesterday, there had been little observable reduction in the radiation being measures at the site. Once yesterday, a rise from 3,700 millisieverts to 4000 millisieverts was detected after hours of dousing.

Bøhmer said the critical task now was continuing efforts to pump water into reactor No 3’s cooling ponds. Lowering radiation levels from that maligned unit is critical so that engineers can attach the newly arrive electricity cable to reactor No 2, which will restore much power to the coolant systems.

Frustration over slow work on the power cable

The cable is not expected to be installed or switch on until the late Friday in Japan at the earliest, given local radiation conditions. Even if it succeeds at making the connection, it is unclear whether the cooling systems in reactor buildings battered by a tsunami and then torn apart by hydrogen explosions survived the crisis in good enough shape to be useful.

An ex-government official who spoke with Bellona Web on the condition of anonymity indicated that there had been a level of frustration surrounding the late arrival of the cable. Several media outlets have also asked why that effort did not begin days ago, at the first signs that the critical backup cooling systems for the reactors had failed.

“What you are seeing are desperate efforts –  just throwing everything at it in hopes something will work,” one American official with long nuclear experience who would not speak for attribution told the New York Times “Right now [the cable] is more prayer than plan.”

The ex-government official confirmed Friday to Bellona Web on the condition of anonymity that TEPCO did not make its first announcement in Japan about running the cable to the plant until Wednesday March 16, six days into the crisis.

Bellona’s Bøhmer was skeptical about criticism of work with the cable and didn’t attribute any delayed announcements or the time it took to get it to the plant to any human error.

“They have had to construct the power line over some time, and it arrived yesterday,” he said.

“All official structures in Japan have been slow to release information, and they reason may be that they did not want to announce anything until it was prepared,” said Bøhmer, adding, “It’s a pity that it has taken so long, but at least we have it there now.”

American officials, meanwhile, remained fixated on the temperature readings inside that reactor and two others that had been operating until the earthquake shut them down, as well as at the plant’s spent fuel pools, looking for any signs that their high levels of heat were going down. If the fuel rods are uncovered and exposed to air, they heat up and can burst into flames, spewing radioactive elements.

Part of the American effort, by satellites and aircraft, is to identify the hot spots, something the Japanese have not been able to do in some cases, the New York Times reported.

Critical to that effort are the “pods” flown into Japan by the Air Force over the past day. Made for quick assessments of radiation emergencies, the Aerial Measuring System is an instrument system that fits on a helicopter or fixed-wing aircraft to sample air and survey the land below.

Getting the Japanese to accept the American detection equipment was a delicate diplomatic maneuver, which some Japanese officials originally resisted, said the New York Times.

But as it became clear that conditions at the plant were spinning out of control, and with Japanese officials admitting they had little hard evidence about whether there was water in the cooling pools or breaches in the reactor containment structures, they began to accept more help, the paper said.

Daniel Poneman, the deputy secretary of energy, said at a White House briefing on Thursday that preliminary results of the initial flights “are consistent with the recommendations that came down from the chairman of the Nuclear Regulatory Commission” Greg Jaczko, which led to the 80 kilometre evacuation guideline given to American expatriates, the paper reported.

Although the worst contamination is closer to the plant, the recommendation takes into account the possibility of shifting winds or greater emissions.

The Japanese have taken umbrage at Jaczko’s suggestion that the evacuation perimeter be enlarged, but Bellona’s Bøhmer said the Jaczko’s comments were consistent with prudence.

“The Americans have shown that there is no danger outside 30 kilometres, but the NRC is not over reacting,” said Bøhmer. “There is still the possibility for more dramatic radiation.”