While Tokyo Electric Power Co (TEPCO) officials finally conceded that reactor Nos 1, 2, 3 and 4 will never work again, a US engineer who helped install reactors at the plant said he believed the radioactive core in reactor No 2 may have melted through the bottom of its containment vessel and onto a concrete floor. 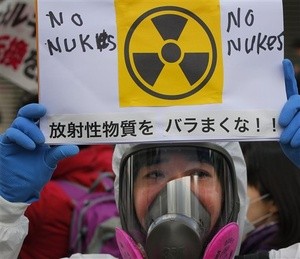 The engineer spoke on the condition of anonymity, and such a serious breach could not be confirmed by Japanese officials. But an ex-government official in Tokyo nonetheless said the theory is gaining wide acceptance among those working to cool reactors at Fukushima Daiichi.

“The weakest point [in the reactor vessel] is the welding around the tube that guides the control rod at the bottom of the pressure vessel,” said the ex-official in an email interview from Tokyo with Bellona Web. “This version of events that [the core of reactor No 2] may have been breached is being mentioned by more and more people.”

Panic is pervading Russia’s Far East coast as radioactive iodine and caesium have been detected in the atmosphere there, though Russian officials say the levels are no higher than those found in far more distant countries such as the United States, where the elements have been declared harmless.

But Japanese officials meanwhile pushed the edge of the evacuation radius around the crippled plant from 30 kilmeters to 40 kiliometers today.

Masataka Shimizu, president of TEPCO, who has not been seen in public since a March 13 press conference, was said by TEPCO earlier this week to be recuperating in hospital from an illness the company would not describe, according to Japan Today.

Russia’s national television news program Vesti speculated yesterday that Shimizu might have taken his own life.

To date, the accident at the plant, which followed a 9.0 magnitude earthquake as a 15-meter tsunami on March 11 that knocked out all of its back up power, is said to have released as much radiation as that which resulted from Chernobyl.

According to international scientific groups monitoring radiation around the world, the Fukushima reactors are emitting nuclear toxins at levels approaching those seen in the aftermath of Chernobyl, said reports on Thursday.

Specifically, the Central Institute for Meteorology and Geodynamics of Vienna, Austria, which has a worldwide monitoring system for the Comprehensive Test Ban Treaty reported that, “Japan’s damaged nuclear plant in Fukushima has been emitting radioactive iodine and caesium at levels approaching those seen in the aftermath of the Chernobyl accident in 1986.”

“Austrian researchers have used a worldwide network of radiation detectors – designed to spot clandestine nuclear bomb tests – to show that iodine-131 is being released at daily levels 73 per cent of those seen after the 1986 disaster. The daily amount of caesium-137 released from Fukushima Daiichi is around 60 percent of the amount released from Chernobyl,” the Austrian institute concluded, according to New Scientist.

There was speculation earlier this week that the accident at Fukushima Daiichi would be upgraded from a Level 5 on the seven point International Nuclear Event Scale (INES) to a Level 6, one step below Chernobyl’s scale-topping Level 7. Japan, however, has yet to issue a new level for the Fukushima Daiichi catastrophe.

Of primary difference between the Chernobyl and Fukushima disasters is that Chernobyl housed 180 tons of spent nuclear fuel onsite, where Fukushima houses 1760 tons in storage pools, many of which have been all but emptied of water due to fires and possible leaks due to reactor building explosions. Of special concern at Fukushima Daiichi is the spent fuel pool atop reactor No 4, which has suffered numerous fires and is thought to be drained of water that evaporated in radioactive steam.

The Chernobyl disaster also began with an explosion where Fukushima Daiichi is a smoldering cauldron of toxins that have been picked up as far away from the plant as Boston.

“This is not the beginning of the end, but the end of the beginning,” wrote New Scientist commentator Michael  Collins.

While world governments scramble to say these trace amounts of radioactive iodine-131 and caesium-137 in the atmosphere pose no threat to human health, Russian environmentalists are quick to dump cold water on that notion.

Environmentalists: measured radiation has no connection to amount of radioactive material in the air

“Years ago, John Gofman, one of the most eminent scientists in the sphere of studying the effects of the impact of small doses of radiation on health proved that safe doses of radiation do not exist,” Vladimir Slivyak, co-chair of Ecodefence said in a commentary aired yesterday on Ekho Moskvy radio.

“That is to say that any radiation will be dangerous to someone. Weak concentrations of radioactive iodine-131 and caesium-137 do not justify announcements that there are no health risks. If there are radioactive particles in the atmosphere, then they can be ingested by someone,” who may contract cancer, he said.

He added that there was no precise way of determining who would be at risk for cancer, but that pregnant women, children in utero, children below age three and the elderly are especially vulnerable.

Dangers from radioactive iodine will cease some 80 days after it has been released into the atmosphere, meaning 80 days after radioactive emissions cease at Fukushima Daiichi, Slivyak said. Hazards from caesium-137, however will linger for 300 years, he said.

Japanese nuclear industry author Hiroshe Takashi agreed with Slivyak’s assessment in an interview earlier this week with Counterpunch, saying that comparing radiation released at Fukushima Daiichi to CT scans and x-rays was useless. He also said the system for measuring radiation in the atmosphere was grossly flawed.

“When it enters your body, there’s no telling where it will go. The biggest danger is women, especially pregnant women, and little children,” said Takashi.

“Now they’re talking about iodine and cesium, but that’s only part of it, they’re not using the proper detection instruments,” he said, adding “What they call monitoring means only measuring the amount of radiation in the air. Their instruments don’t eat. What they measure has no connection with the amount of radioactive material.”

“While in the body the isotopes’ radioactive emissions can do significant damage, mainly to DNA. Children who ingest iodine-131 can develop thyroid cancer 10 or more years later,” said the institute, according to New Scientist. “A study published in the US last week found that iodine-131 from Chernobyl is still causing new cases of thyroid cancer to appear at an undiminished rate in the most heavily affected regions of Ukraine, Belarus and Russia.”

In typical circumstances, plutonium does not go airborne. But in catastrophic conditions like Chernobyl and Fukushima, plutonium ends up in the environment and remains toxic for hundreds and thousand of years.

Also in question is whether plutonium is spreading to the environment from the damaged reactors by steam or leaks, or both, or from the spent fuel storage pools.

The plutonium finds signal another dangerous turn of events. Sedentary plutonium oxide soon becomes soluble and it can be expected that it will not remain within the confines of the Fukushima Daiichi plant for long, nuclear experts said.

“It is likely that the appearance of the plutonium is a result of the situation of the fuel rods. They may be partially melting,” Edano told reporters.

The identification of caesium and iodine isotopes across Russia has caused alarm, especially in Russia’s Far East regions of Primorye and Kamchatka that border on the Sea of Japan. Russian radiation officials who took measurements of radioactivity in the air near Vladivostok between March 26 and March 29 confirm that it has come from Fukushima Daiichi, but again insist that the levels pose no risk to human health, the Russian daily Kommersant, reported.

Reluctant to believe official reports, however, residents have stormed local pharmacies for potassium iodide, a prophylactic to protect against thyroid cancer after radiation exposure.

The “Chicago” pharmacy chain told the paper that it had sold out of all iodine containing medications. Other drug stores have raised the price of iodine medications over the past five days by $9 to $35, an outrageously high sum for the area. Tablets of iodine have begun to show up on eBay where they are being auctioned off for $15 per tablet, with entire packages of the medication going for $2500.

The spread of radioactivity continues

The International Atomic Energy Agency (IAEA) has confirmed that current data indicates radionuclides are falling on 17 prefectures of Japan.

The UN nuclear agency also said that 30 kilometer to 40 kilometer band around the plant is contaminated with radionuclides measuring 0.03 to 3.1 megaBecquerel, representing a major spike.

The contamination does not stop on land. At the beginning of the week TEPCO and Japan’s Nuclear and Industrial Safety Agency (NISA) publicized their measurements of contaminated seawater near the plant, which stands on the coast. At 330 meters, concentrations of radionuclides by dozens, hundreds and thousands of times exceeded norms. Measurements of iodine-131 reached 50 Becquerel per cubic centimeter, or 1250 times normal; caesium-134 hit 7 Becquerel per cubic centimeter, exceeding norms by 117 times; caesium-137 was found in concentrations of 7.2 Becquerel per cubic centimeter, outdoing norms by 79.6 times. The radionuclides are a result of regular dumps in the ocean carried out by Fukushima Daiichi and leaks of contaminated water from the crippled reactors as well as the spent fuel storage pools.